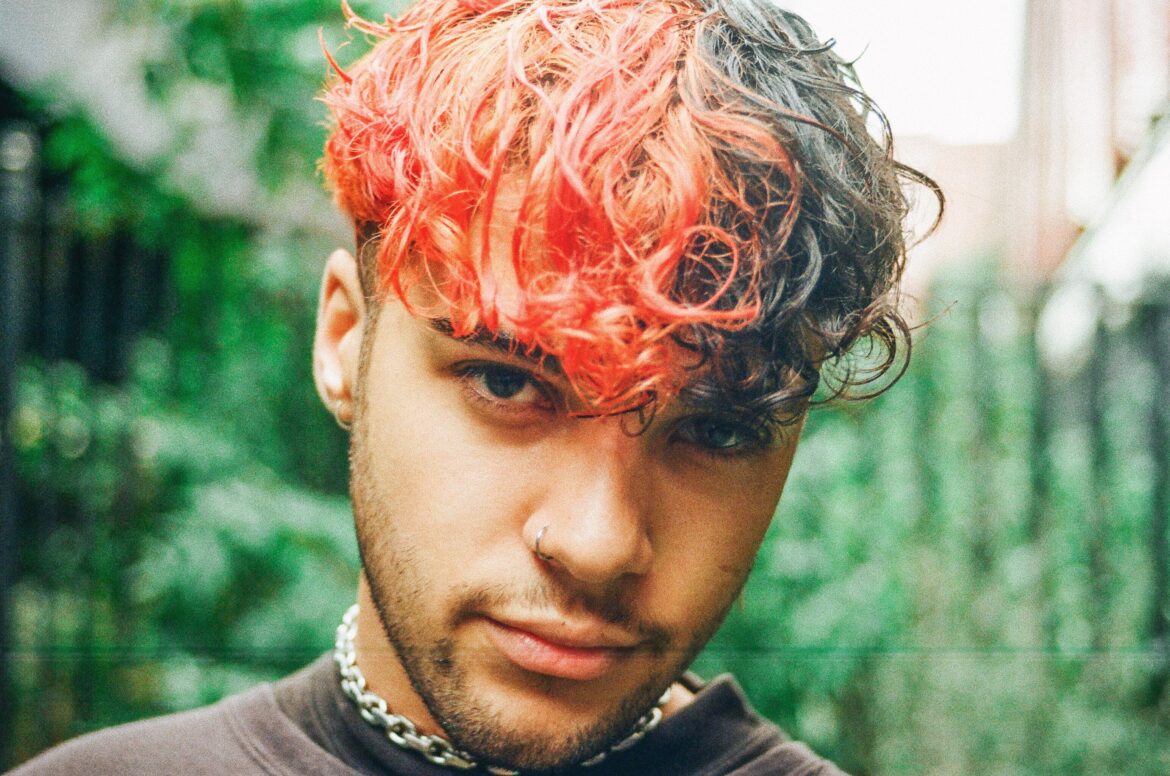 Spanning genres, aesthetics, and incredibly polished at a young age, Marcus Connolly is one to watch out for. I covered their most recent release ‘The End of the Line‘ in our Tracks of the Week roundup, where I said:

“Heading in a new sonic direction, Connolly sets himself up for a win here with a Metal inspired sound fused with a trap beat that creates a refreshing take on the genres. The vocal is raspy and breathy, dripping in attitude and texture. The production is simple but effective, a home run on all fronts”.

As they gear up to release the next installment in their discography ‘Sting!‘ which drops on 27 November, I caught up with them about their work, aesthetic and more…

I’m good thank you, just surviving best I can in this crazy climate we’re in right now.

Tell me about your last release, ‘The End of the Line‘ and the concept behind the music video.

‘The End of the Line‘ is basically about technology and how it takes over our lives, it’s about how we willingly submit our lives to technology and one day soon our whole lives will probably just be saved on a hard drive. The music video for me was a way to represent the different versions of me in the creative process too. Being a self made and independent artist, I’m often the one putting everything together. I wanted the video to represent this and have the performer version of me in front of a really broken/makeshift green screen and also show me burning everything up.

The music videos for me are always a scramble. There was only a very small team of us on this one and with it being a location shoot too, it was kind of like we got there and just had to roll with it. I’m slowly putting together a team of people for each music video project I do and I find it really helpful just to have other creatives around on shoot days. One thing I’m trying to focus on is building a narrative into my videos, the same way I do with my music. I think it’s easier for me with music because I very much control all aspects of the creative process but with music videos it’s a little trickier cause there’s more people on board and different creative visions. It’s always a really fun experience though and I want to do more for this project.

You have such a polished and authentic aesthetic, what inspires you to create in the way that you do?

Thank you, I think my life inspires me the most. Visually I can get really inspired by anything. I’m always seeing the potential for art in everything, I don’t really find that I ever pull from a specific source. I’ve always been creative, I guess from a very young age I was really into art and wanted to be a sketch artist but when I reached my teens and was told how unrealistic it was I kind of took the path towards digital media and was going to go into film/tv production but I just always had my own vision and wanted to focus more on that.

Has the current political climate/pandemic affected your creativity?

Yeah definitely. I think it’s had a huge impact on us all. I honestly think we’ll all look back at this time and where we were/what we were doing. I’ve stayed creative but it’s also been hard because growing up in a world that seems so doomed, it’s easy to feel discouraged especially as an independent artist that’s relatively early into their career. I know I’ll always create and write though, regardless of whether people listen or are interested in what I’m doing.

Do you have any tips for artists struggling to be creative during this time?

Don’t put pressure on yourself. We’re in a very turbulent time, your main priority should be your own sanity. I should listen to my own advice when I say that but as I’ve grown as an artist I’ve found a lot of my art to be charged by chaos and trauma in my life. Not so much in the past but everything I’ve created has stemmed from some kind of trauma I’m working through I guess. It’s different for everyone though and if your music is your happy place it can be hard to get into that place right now, but it will come in time.

Well I have a new single dropping November 27th called ‘STING!’ which is the next track I’m dropping from my second mixtape Fresh Hell, that should be coming in early 2021. That track is probably one of my favourites off the project because it’s so hard and aggressive but also has a fun playful energy about it. It’s basically about coming through the other side of a rough time with a sting in your tail and feeling powerful as hell. It’s kind of obnoxious and arrogant but I wrote it at a time I really felt on top of the world in my own way.

I can’t remember for sure, I used to write poetry and a lot of emo poems when I was a teenager and then I guess I started producing and making really bad demos when I was 16/17 which then slowly progressed into building up to my first mixtape. But originally I started with a sound that’s similar to where I am now, just an emo rock kind of vibe, I think there’s a demo out there actually of one of the first tracks I dropped on Soundcloud called ‘Daydream’.

It’s very cringe and sounds like it’s been recorded on a potato. But I think it kind of shows how far I’ve come not just in songwriting but in finding my voice as an artist. I’m not traditionally vocal trained at all but I love writing songs and creating harmonies on tracks now which is something that I never would have discovered if it wasn’t for putting myself out there in the first place.

The music scene where I’m from is predominantly indie bands and hip-hop/grime artists. I think that’s why I felt like I didn’t fit into it for a long time. My music has always been too ‘weird’ or ‘quirky’ for my local music scene but as time has gone on I’ve started finding people who get the vision. And I think you can learn something from everyone, so I definitely keep an open mind.

My music taste right now is super eclectic so I don’t really listen to particular artists that often anymore. I think my all-time faves will always be the greats like Madonna, Prince, Bowie, Marilyn Manson, Eminem, Kanye and Kurt Cobain. I just appreciate them all in a different way.

Growing up I loved artists like Marina And The Diamonds, Charli XCX, Blackbear, Panic! at the Disco etc, I really appreciate what Yungblud and Declan McKenna are doing right now.

I’d really love to collaborate with Jeff Bhasker on making a record one day! He’s one of my favourite producers and it would be a dream to have a record produced by him if I was ever given the opportunity. I’m really liking what Chris Greatti has done on a lot of albums this year too, would be sick to have him on something.

Unfortunately I only really started to build my buzz as an artist just as the world was hit by a global pandemic, however I have managed to do some really cool online sets alongside some of my favourite upcoming artists like Michael Medrano and Roma Radz. My goal is to definitely play more shows next year, either online or in-person, and once the second mixtape drops, plan a mini-tour.

I’ve been listening to a lot of 80’s gloom and goth rock at the minute not going to lie, so really into New Order, Echo & the Bunnymen, Joy Division right now. But also loving a lot of the new stuff too, I’m obsessed with beabadoobee.