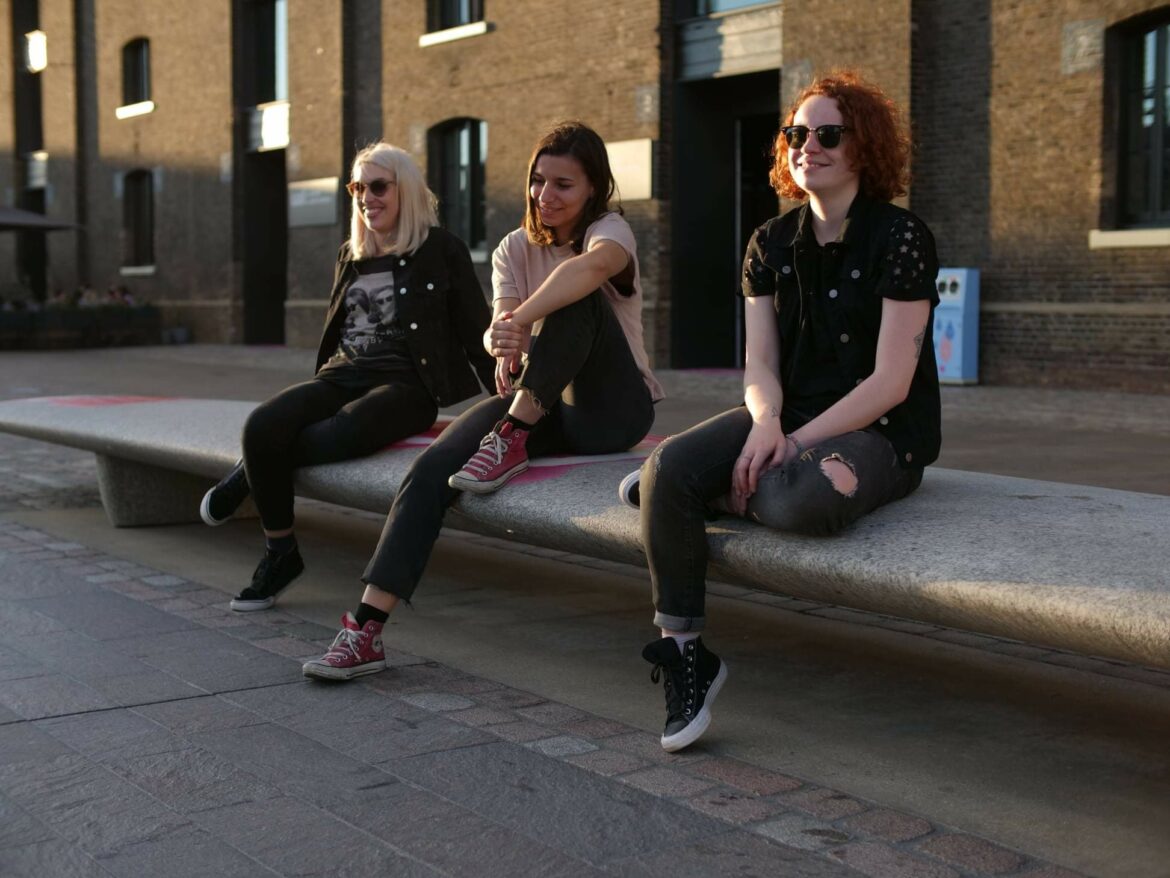 BERRIES have just signed to Xtra Mile Recordings for the release of a new single, ‘Copy’, on January 22nd 2021.

A London three piece with a penchant for combining off kilter melodies with guttural grunge, London trio BERRIES have been turning heads up and down the country for a number of years; their vast array of singles turning heads.

It’s not just offstage that the band have impressed, however, working regularly with national promoters DHP, recent notable shows include Cherry Glazerr and Porridge Radio at Electric Brixton, Ex Hex at Village Underground and supporting Frank Turner at a socially distanced acoustic show in Nottingham.

BERRIES are set for a big 2021, so we thought we would send them our 20 questions.

Hi, how are you today & what’s the weather like?

Lucie – Hello hello! It’s Monday morning and I don’t think the sun is going to make an appearance today so I’ve switched all the lights and heaters on. At least it’s not raining! I should get one of these light screens that give you some melatonin or something 😋

How has Covid 19 affected you?

Lauren – I’m very lucky really, I’m still working, I like where I live and my friends and family are well. I have still found it all very stressful, like most people, but I’ve tried really hard to stay motivated and try my hand at some new things. I’ve also tried really hard to not give myself a hard time when I haven’t been motivated and have laid in front of Netflix for hours!

How did you get signed to Xtra Mile?

Holly – It was a mixture of a few things, we sent across our next single and they had been checking us out previously and then we had a video meeting and a nice long chat about our plans and their plans and it went from there 🙂

Holly – Viv Albertine’s book Clothes, Clothes, Clothes. Music, Music, Music. Boys, Boys, Boys. Viv Albertine is a brilliant writer and her book documents her time in The Slits and everything they came up against and beyond, it’s an amazing read and takes you through every emotion possible. Similarly Tessa Pollitt released a scrap book of things she collected during her time in The Slits with posters, photos, news clippings and it’s absolutely incredible. It also comes with The Slits Documentary ‘Here to be Heard’ on DVD which is very eye opening and an absolute must see!

Holly –  I was definitely one of those music nerds who would hang out in the music block at lunch times. Although I did have Nirvana and Jimi Hendrix patches on my rucksack which I think should earn me some cool points…

Lucie – Our last headline at Colours for the release of our second EP was pretty magical. It’s very nice to have all of your fans gathered in one place and feeling all of the love and support from them 🙂

Best act you have supported?

Holly – Frank Turner, he is such a nice guy and a really amazing performer!

Lauren –  The Subways, Chili Peppers, Foo Fighters, Paramore (that much hasn’t changed!), Bullet for my Valentine, My Chemical Romance…etc!

Lauren – Vinyl, but also stream! I was a bit of a late convert to streaming but I’ve made it here now!

Tell us about your new single?

Holly – It’s called ‘Copy’ we are excited for people to hear it, we were originally planning to release it this year but held off when the label came on-board so we can’t wait for it to be out! *Spoiler* there might be a wah pedal…

Holly –  Anthony Smith at Big Smith Studios, he is brilliant and really pushes us to experiment with sounds and structure. Really lovely guy, can’t recommend him enough!

Holly –  If we wrote a song with Sleater Kinney I think that would have to be up there.

Lucie – At the moment it’s Below Deck!

Which five records would you save if your house was on fire?

Lauren –  The Subways – Young For Eternity

Chili Peppers – By the Way

How are you coping with no gigs?

Lauren –  I’ve watched and streamed quite a few shows at home. It’s never the same but at least it’s something! For the band, our last gig before lockdown was in February with The Mysterines at The Dome and it was so awesome, we had a great time and were on such a high! So we were (and still are) buzzing from that and have just been eager ever since to do it again.

Are you working on an album?