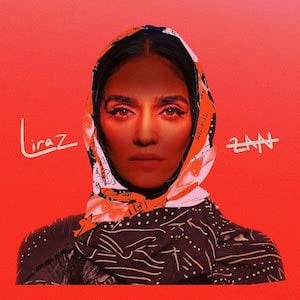 #musicacrossborders sounds like a hashtag for a modern Eurovision Song Contest but it would work well as a social media promotion tag for the second album by Israeli actress, singer and dancer Liraz Charhi because this is exactly what the new record Zan aims to do. In 1970 Liraz’s Iranian-born parents emigrated from Iran to Israel. During this time the two countries had a healthy relationship. Yet just a decade later, the Islamic Revolution took hold and from then on the harmony between the nations has been fractured (now for military reasons). For the Israel-born Persian heritage Liraz this has not only prevented her from ever visiting the home of her ancestors but also has understandably given her a confused identity. The conflicts between Israel and Iran has already been touched by Liraz. As an actress she has starred in the spy thriller Tehran as a Mossad agent who sends a spy to Iran. The album Zan – meaning women in Farsi – is an extension of this commentary but is more importantly Liraz showcasing her dream. A dream that the two countries can collide in a culturally and musical way, hoping leading to more peace in the future.

As Israeli and Iranian people are not meant to collaborate, let alone associate with each other, Zan was an album recorded secretively with Iranian musicians who wanted to remain cautiously anonymous. They even communicated via encrypted messaging apps with Liraz to avoid being caught. Liraz and her brave collaborators took a lot of risks in recording the LP and her determined passion is evident through an album that acts a personal revolution on a number of levels. Introductory track ‘Zan Bezan’ translates as Women Sing, is a call to action for her nation as well as her oppressed gender. She refers to Gordafaries, the plural of Gordafarid, a poem and symbol of courage of Iranian women. According to Liraz in interview:  for me to see today women in Iran that have been muted for the last 42 years since the revolution, it’s hard to see. It’s hard to imagine this kind of life because they’ve been muted by the extreme regime.” Therefore the lyrics on the opening track – which like the whole album are in Farsi to show respect her parents – really point out the album’s intention: ” I dream of Tehran. My arrows stand. Steady and aimed. As the lashes of my eyes. To fire for our freedom. Women, sing it. You’re allowed to dance. You’re allowed to sing
You’re allowed to rejoice.” The titles for the rest of the tracks also show this same determination for change: ‘Hala’ (Now),  ‘Nafas’ (Breath), ‘Bia Bia’ (Come Come), ‘Shab Gerye’ (Night Crying) and ‘Injah’ (an arabic name meaning success).

The album is also a fun listen. The fusion of Bağlama – a stringed instrument performed in middle-eastern countries, as well as Turkey and the Balkan countries – with 1970’s spacy disco and funk make it an album that’s easy to enjoy and dance to for those unacquainted with the countries’ genres. Liraz learnt about Iranian music styles of music when meeting residents in the Tehrangeles community in California.

Those who enjoy the community spirit of Sinkane albums will also appreciate the crowd rejoicing atmosphere. Zan is Liraz Charli staying true to traditional sounds but also putting her own stamp on with the electronic gloss. Penultimate song ‘Nafas’ is a particular standout for its unsual twist. Her voice is provides the authenticity on top of a modern M.I.A filter – snappy R&B beats and megaphonic call-and response – as well as a swirling watery texture that shows an attention to detail in the mixing. Yet the album ends hypnotically with Lalei, a track that transports listeners right to the heart of Iranian culture. A psychedelic aura swirls around Laleh’s orthodox Islamic call before an old recording of perhaps the original climaxes the track.

The music and Liraz’s voice can get overwhelming at times but with all the cultural complications, the existence of Zan is something of a miracle and its creation shows the powerful rebellious possibilities of musicians and music.