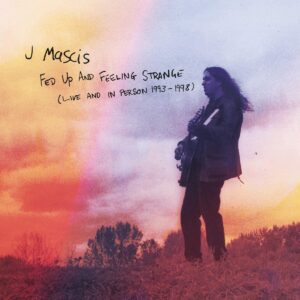 In 1992, I was lucky enough to have obtained tickets for the Rollercoaster Show, at the Brighton Centre, in which Dinosaur Jr had co-headlined a series of shows with fellow alternative artists, from Ireland and the UK. This was a mighty affair, playing 11 shows across the length and breadth of the United Kingdom and as I recall, the show I attended was a stunning affair in which DJ had shared billing with the Jesus and Mary Chain, Blur and My Bloody Valentine, a band who would cease live performances in the UK after these shows and would not to play again on these shores until 2006. The 4 bands were supporting their current album releases and were the equivalent to the North American Lollapalooza festival, a brand that still lives before the recent pandemic.

Dinosaur Jr had their catalogue revisited by Cherry Red in September last year in the form of expanded editions of the albums Green Mind, Where You Been, Without A Sound, and Hand It Over. These releases included live performances, as well as the studio recording of the albums. In the case of Fed Up & Feeling Strange, these are the product of Mascis’s solo venture, in which he performed acoustic sets of his band’s material, with occasional cover versions. This set of discs captures three shows recorded across the decade and it has been said sheds “…a fascinating, low wattage light on J and his songs.” The first of these is Live At CBGB (The First Acoustic Show) and as its title would suggest is the first of J’s foray into this acoustic genre. This is something you can hear as the recording begins, with J telling the audience “…my first-ever acoustic performance…”, something I found rather charming, and as this performance begins, “I like to see you in the morning, in the evening, but you need a warning…”, from ‘What Else Is New’. An incredibly accomplished musician by this stage in his career that had already seen him release 4 albums with his band. These recordings were first released in 2006, but are a fantastic representation of his ability as a musician and songwriter, complete with the occasional howl from the PA, they continue through ‘Thumb’, ‘Keeblin’ and into a “…a tune I’ve never played before, but a friend of mine wanted to hear it, so let’s give it a shot…”, as ‘Oh No, Not You Again’ another melancholy love song from 91’s mini-compilation album Whatever’s Cool With Me, then it’s into ‘Flying Cloud’, then the first of the cover versions is Lynyrd Skynyrd’s ‘Every Mother’s Son’, a song that J makes his own; the presentation is so very close to that of Dinosaur Jr. These performances breathe the 350 capacity of Manhattan’s CBGB’s venue, so that I can feel the hurt of what we’re missing currently, even though this particular show was recorded in 1993. Through ‘Not The Same’, ‘Throw Down’ and into ‘Get Me’ a track from 93’s Where You Been. With ‘Quest’, ‘On The Run’ and ‘Repulsion’ on this disc, these would appear to be recordings of the entire show and for this first venture on the acoustic scene, brings to mind the adage of riding a bike – the occasional PA howl just reminds you of who you’re in the company of.

The second of these recordings is one called Martin & Me and was recorded 2 years later, during his acoustic tour in autumn of ’95. I wouldn’t necessarily say that the artist has become more familiar with the setting and his tool, but this does possess a different characteristic to that of the first album. I can’t say I have noticed the acoustic howl that was occasionally familiar on the first, but for Mascis, this is almost a staple. The acoustic appears richer here, perhaps the Martin refers to a Martin guitar? It might seem a little strange, but Mascis plays a cover of The Smiths’ ‘The Boy With The Thorn In His Side’, performing both sparring roles of the Morrissey and Marr partnership himself, his gravel fed vocal acting as the quilt throughout this number. It’s lovely to hear that even professional musicians make the occasional mistake, as Mascis can be heard saying “…sorry I fucked that shit up…” referring to his vocal during the performance of ‘Not You Again’, an illustration that we are all human after all! In terms of acoustic setting I have to comment, that I did notice a marked change in the audio between the numbers ‘Keeblin’ and ‘Flying Cloud’, just like coming out of a tunnel and hearing the audio feedback change. A reworking of Carly Simon‘s ‘Anticipation’, is what follows, a simply incredible moment, and slightly further on another performance of ‘Every Mother’s Son’ is offered. As I have said, the audio setting is richer than that on the first disc, the marked difference between these two versions of this song is apparent. Finally, this recording also includes the previously unreleased track ‘Grab It’, as our host asks “Is everybody feeling mellow right now?”, echoes of Jimi Hendrix come to mind, as Mascis can be heard playing with his guitar’s feedback before launching into the number, “…I’ll be in your room, you’ll be coming soon. I’ll be gone all day, grab it that’s your way…” the artist demonstrating the skill he has adopted when playing the guitar. Another brilliant, but slightly different performance.

Rounding off our much-missed dabble with the art of live performance, comes Mascis’s Live In Stockholm disc. A similar intimate setting to those of earlier offerings, but unlike those, this one is previously unreleased. The setting is again fairly intimate, although I would say has more in common with his very first acoustic show and, put together, these 3 discs might be described as the perfect introduction to songwriting on the alternative scene in the 90s. The first number collides 2 of Dinosaur Jr’s classic tunes, ‘The Lung/ Blowin’ It’, which demonstrate this unassuming lead singer’s style, a style that was originally a way to connect the guitar solos. Next up Mascis announces a new song, ‘Too Hard’, although as this set progresses, through ‘Repusion’, ‘Sure Not Over You’, ‘Little Fury Things’ and onto ‘Get Me’, it seems that this presentation is far more musically led, with far less audience interaction than on previous discs. Here the artist seems far more comfortable with this form of playing to an audience, until ‘Drawings’ when he remarks to his audience that “…I’m doing the metal part, because I know you Swedes love the metal…”, as a rather frantic acoustic solo ensues and it would seem to great audience appreciation. Then we head skyward as ‘Flying Cloud’ is performed, which when played on an acoustic is like heading to cloud nine, such is its vocal and musical impact. A further six numbers go to complete this collection of songs, which finish on ‘Every Mother’s Son’, a version of the Skynrd number which has appeared on each of these shows and has always seemed to be an audience favourite.

These are extremely well-compiled musical journeys, 2 of which have been released before, but with the final unreleased show now included as part of this set, it completes what is an all round look at this artist who, from the noise of his band Dinosaur Jr, has settled down and through the 90s made acoustic wonderful.

Fed Up & Feeling Strange is released on 4th December through Cherry Red.