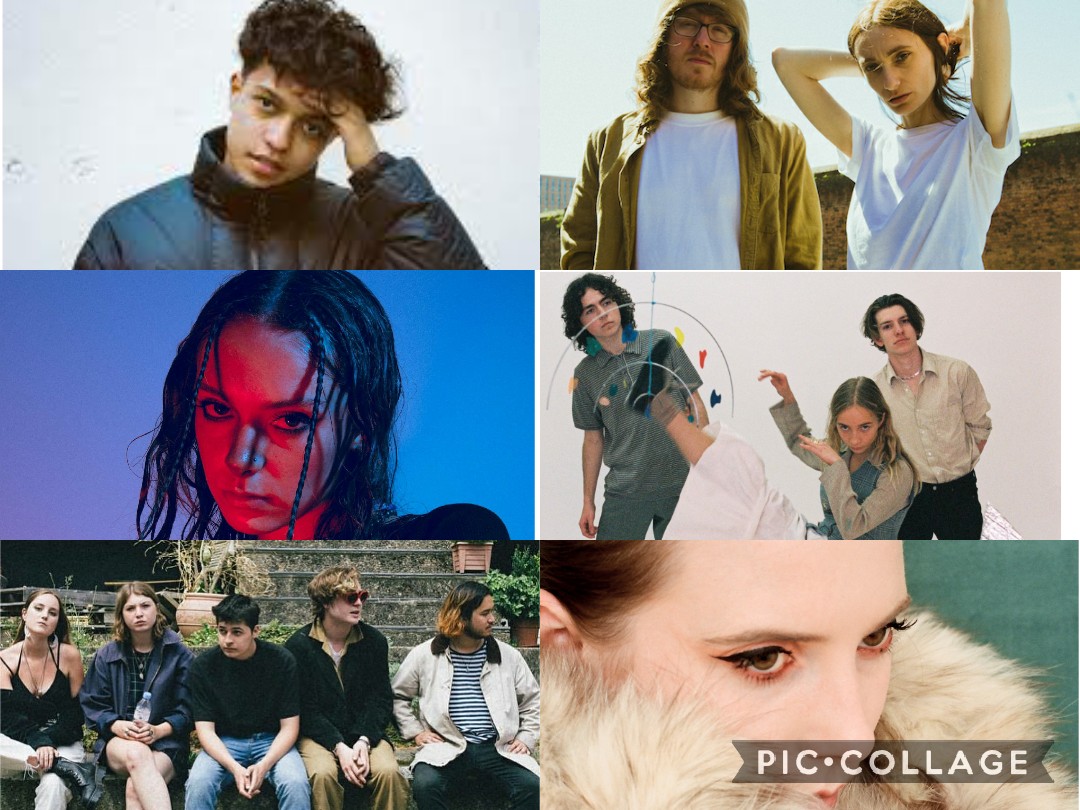 Here is the second part of our UK wide ones to watch in 2021, it will be followed by our Welsh tips  and from around the globe shortly.

There’s only one track available currently (more coming soon apparently) but that is enough to blow your shoes and socks off and give you that strange expression on your face when you walk into a strong wind and it looks like you’ve got G Force applied to your muscles.

When we’re allowed to go back to hot and sweaty gigs this lot are going to melt faces.

I’ve spouted lyrical and not so lyrically about Couples on our Show Me Magic! pod and I’m not about to stop now.

They describe themselves as “sparkly post punk from North West London” but there’s a jangly indie about the guitars and a very punk element to the vocals. ‘Faites L’Amour‘ was perhaps my favourite track from 2020 so i’m expecting great things. (Jim Auton)

Released last year Holly Humberstone’s debut EP Falling Asleep at the Wheel started life within the poetry books she was raised on, and later developed her signature sound with producer Rob Milton (Easy Life). With this accomplished and impressive EP, Grantham singer Humberstone laces her evocative alt pop sound with brutally honest lyrics delivered with a late-night conversational quality that follows in the slipstream of the likes of Billie Eilish and Lorde yet still sounds defiantly individual and personal.

The songs are her attempt to translate her most intense feelings from “mental health struggles to the dizzying feelings of falling for someone for the first time.” ‘Overkill‘ is a killer tune that charts confusion, doubt, heartbreak and release, while Falling asleep at the wheel shows an emotional maturity far beyond her years. Humberstone has carved a niche for herself in lockdown becoming a comforting friend in struggle for her many fans. (Bill Cummings)

King Hannah led by the creative force of Hannah Merrick and Craig Whittle released their awesome debut EP ‘Tell Me Your Mind And I’ll Tell You Mine’ at the end of last year.

Lead track ‘Creme Brûlée’ hangs heavy with the mysterious, seductive and aching charm of a David Lynch soundtrack. Enveloping with Merrick’s haunting lovelorn tone, pitter-patter drums and swelling to a fantastic crescendo of Whittle’s spiralling guitar licks, it is spellbinding. While ‘Meal Deal‘ is insidious and weaving with Hannah’s effortlessly brilliant melody that is part sinister part alluring, it gradually envelops from country-scorched riffing and elastic and grooving percussion to crushing guitars into an incredible epic. About finding somewhere to live, it conjures images of malnourished spiders in baths and overpriced flats with too many bathrooms.

For fans of the bittersweet atmospheres of Mazzy Star or the intimate and slowly building sound of Grouper, King Hannah’s first release on City Slang is at once expansive, soothing and intoxicating and possesses an intriguing mysteriousness and a vast wealth of promise. They have pencilled in a debut album for later this year and we cannot wait to hear it. (Bill Cummings)

Another band I don’t do very well at shutting up about is Drug Store Romeos. And by sheer coincidence, I’m sat in a car park in Fleet, Hampshire from whence they hail. Spooky.

I love how they make simple, brilliant pop. I love how they don’t stuff everything bar the kitchen sink in because everything that is there needs to be. I love how they’ve managed to make atmospheric music not sound boring and insipid and avoided twee expertly. And they wrote me a song. Not really. But I’m pretending.

Fingers and toes very tightly crossed that the socially distanced gig in London goes ahead next month. If not, a rescheduling for very soon after. Like, March. (Jim Auton)

18 year old Kamal. is signed to Neighbourhood Records, home to Brit-award winning rapper Dave. Conversational and homespun his ability to infuse tenderness, sensuality and personality into these downtempo RnB cuts is beguiling. His songs have been in invited into the lives of millions of streamers in lockdown, with two of his five songs about staying at home despite being written pre-lockdown,

Influenced by D’Angelo and growing up as part of Generation Z in London, his songs possess heart-on-the-sleeve lyrics inspired by every day issues: “from not wanting to leave the house to go to a party, to getting the bus back with a friend after a night out – to serious reflections on mental health.” He told the Telegraph: “I think that’s why my songs have picked up traction, everyone is stuck at home, so they clicked with it,”

‘Blue‘ is a sensuously drawn love song draped in midnight light as his tumbling couplets detail the contors of skin and the reasons why he loves his girl. Kamal. is one to discover in 2021. (Bill Cummings)

Martha Skye Murphy released her EP ‘Yours Truly’ at the end of 2020. It came off the back of the ‘Heal’ EP, and cemented her reputation for wonderful spectral and slightly unsettling songwriting invested with the kind of majestic, peeling back of the curtain of reality that the likes of PJ Harvey and Joanna Newsome can conjure. These sparse, piano-led arrangements ripple with Murphy’s exquisitely artful tone that sits on the razor’s edge of beautiful and sinister. Based in London and informed by Serge Gainsbourg, Murphy provided vocals on Nick Cave and The Bad Seeds’ album ‘Push the Sky Away’ in 2013. Martha’s striking solo work similarly looks to push the limits of contemporary musical norms.

Murphy describes the EP as “a children’s book for adults.’ The narrator on ‘Yours Truly’ oscillates between the vocal character of a child, ruminating on the vulnerability of being an adult. Murphy says. “The best way of disguising yourself is through the appearance of truth. These songs are my exploration of that. They are the raw skin underneath a scab”.

She describes a starkly ascending piano motif across ‘Outis’ as her ‘analogue inversion of a Shepard tone’. Above this Martha emotes surreal, existential fragments of poetry, her voice is reminiscent of Kate Bush or Jenny Hval in its artful improvisatory, hushed style that sounds like a whisper in the ear. Third track ‘Yours Truly’ is co-produced and mixed by Andrew Sarlo (Big Thief, Bon Iver). Final track and lead single ‘Self Tape’ is extroadinary, rippling pianos and ladelled with experimental flourishes are invested with a devastating quivering intimate vocal performance that’s quivering with a raw self revaltion that bewitches and beguiles. This year Martha Skye Murphy is an artist set to transfix. (Bill Cummings)