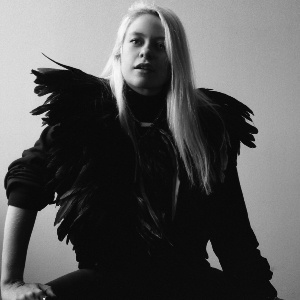 If this year wasn’t crazy enough for the average musician on the street if you’ve been toiling away for several years, struggling to follow up a critically acclaimed EP and bagging support slots with the crème of the 2015 crop, to then finally get to finish a debut LP, sign for a cool indie label who want to release it, for the whole thing to be stuck on ice for the foreseeable and have to deal with no gigs, no singles, no nothing. What do you do? What can you do? In Anna B Savage’s case you hole up in Bristol and keep yourself busy, starting with “Covid Covers” videos on Instagram. During this time she did amazing covers including ‘Sparks’ by Coldplay, ‘Mean to Me’ by Stella Donnelly and ‘A Place to Be’ by Nick Drake.

Since starting the lockdown in March last year and enduring the months of nothingness, Anna escaped to Dublin in September to start a Masters degree in Music at BIMM but had been in quarantine for 13 days, and the day I call her she is quite excited about the next day being day 14. Although whether that means escape from her flat in Rialto, a suburb of the Republic of Ireland’s capital, tomorrow neither of us are sure. “I have never spent much time here really, I have only been here to pass through to play a few gigs so I have no idea where anything is, or what I am doing, or where the good or bad areas are, but I have lucked out apparently. I decided to do the course a week before it started, I had a choice between Bristol and Dublin, I applied for both as I have family in Bristol and I was there for lockdown and I thought I can do a Masters while I’m here, then I saw there was one in Dublin, and got into both so I had to make a decision. So I decided to have an adventure. Although this isn’t really the time for adventure, and I haven’t been able to go out and make friends. Yet”

Shortly before we spoke, Anna announced her debut album, A Common Turn would be released on 29 January 2021. A new year and hopefully a new beginning from yet another annus horribilis. Like so many LP’s last year, it should have been out shortly after the world closed for business but got put on hold. “No one had any idea what was going on then, but nobody has any clue what is going on now, but it needs to come out. Also, as a debut album, I don’t have the fan base. So someone like Phoebe Bridgers, or Laura Marling, already have a pretty large wealth of people listening so they could put it out back at the beginning”.

Anna first appeared back in 2015 with her debut eponymous EP, but then disappeared despite several high-profile support slots, with, amongst others, Father John Misty.

“It wasn’t actually a break on purpose, I took an accidental hiatus because I had really bad writers block and bout of mental health stuff, and I had a relationship that I got out of, and I needed to rebuild myself from the bottom up. The music industry likes timely releases and to ride the crest of a wave of attention, but I didn’t do that. I couldn’t write an album for the first few years after that and didn’t finish writing it until 2018 and recorded it in 2019, with some re-writing in the studio of course. So, it’s been a very long process to get here”.

“The whole recording is just me and Will, the incredible musician that is William Doyle, so it was literally just me and him playing on the album, but we are putting a band together for live dates, there are things planned but we can’t announce anything for various reasons, including that we just don’t know what is happening.” Happily, since we spoke last year Anna has been able to announce a series of gigs for towards the end of 2021.

Anna has an incredibly distinctive and astonishing voice, a range that can climb and cascade like a wave over the rocks of a melody and rhythm. There is a theatrical and even classical twist to her music; performance art that is born out in her videos. You will not find her with her guitar in hand staring down a camera lens; over the four singles she released last year, it ranges from a literal interpretation of a sexual awakening on ‘Chelsea Hotel No.3′, through the stop-start animation of the “rebirth” in the ‘Dead Pursuits’ film, the blindfolded, monochrome, paint assault of ‘A Common Tern’ to the beautiful coastal landscapes and beaches for ‘Corncrakes’.

Her influences are varied and genre-crossing. “My main person of all time is Ella Fitzgerald. Both my parents are professional classical singers, so there wasn’t much pop music in our house, but there was jazz, a lot of Ella, Nat King Cole, Charlie Parker, Miles Davis, that kind of thing, and I would just put on any Ella stuff and just try and copy and do it till I got it. We also had the ‘Best of the Song Books’ and Gershwin songbooks. I remember listening to Bill Withers ‘Ain’t No Sunshine’ and repeating the ‘I know, I know, I know…’ refrain until I could do it all in one breath and I practised that a lot when I was little. Lots of Whitney Houston, Christina Aguilera, Destiny’s Child, Alicia Keys ‘Fallin’, learning the beginning she does to that. I was with my brother, and I just did the whole run at the beginning of ‘Fallin’ and he was like ‘Woah’ so I thought ‘I did good then’. So those are my ultimate singing resources. Also, I used to watch Opera, ‘The Magic Flute’ and ‘Marriage of Figaro’ and do the Queen of the Night aria from ‘The Magic Flute’ until I got it right.”

She is about to finally see the fruits of her labours go out into the world, a journey of no little emotional and logistical upheaval. ‘Dead Pursuits‘ was the first song to arrive out of the other side of the writers block. “I had spent two years desperately trying to write songs and feeling like I couldn’t write anything, and I don’t really know where that song came from, which is a horrible thing for a musician to hear because they are like ‘don’t fucking lie to me, you worked really hard and that’s why the song came’ when people are like ‘this song came to me in a dream’, but I had been working fucking hard for a really long time, and nothing was coming out, and I felt exhausted. I wrote the bare skeleton in an afternoon and sent it to my manager, and he was ‘oh that’s nice’ and I was ‘no no no, this is going on the album, this is a proper song’ and it took him a long time to come round, but in the context of the album he got it.”

The record is a beautifully realised piece of art, from the way it was pieced together to the individual parts to the stunning artwork, so dissecting that for the mass market and promotion was alien.

“It feels weird picking out singles and having a non-linear constellation thing and then you throw the whole sky up. I just don’t know if people will give it the time, also because I just have never released an album before and I don’t know how to get people to listen to it to it as an album because I do think all these work best in conjunction with each other but obviously you can’t ask that of everyone but I am very excited for people to give it the time.”

The songwriting, coming off the back of a toxic relationship is deeply personal and intimate, not least in the opening lines of the first single from the record.

“With ‘Chelsea Hotel No.3’, I would say it is more of a mosaic, and actually that’s true of all of my music, they are based momentarily on a real thing that happened and made up of other things that really happened or read about or listened to a podcast about and placing those things next to each other to explain the thing I want to explain. So that was unidentified man in the song, not a specific person in my life, but it definitely felt, in my experience, like a lot of men.”

“The toxic relationship in ‘A Common Tern’ was a specific relationship but I also feel like the toxicity was me at myself and it is also what I talk about in ‘Chelsea Hotel No.3’, not allowing myself to be, not allowing myself to listen to what I was actually thinking or feeling or wanting to be, and I was always trying to pre-empt what I thought would be best for my ex-boyfriend but it is the same toxicity as making yourself smaller or more palatable, and bending yourself into the corners of other peoples wants or desires, and then actually, for me, emerging at the age of 26 and thinking ‘holy shit, what do I like? Who am I? What is happening? It was the most fulfilling and amazing few years of my life after I came out of that relationship because suddenly I wrote an album, I started actually doing stuff that previously I had just said ‘well that’s a nice thought’ like moving to Canada or doing stuff like that which I wouldn’t have given any gravitas to previously and then suddenly I was like ‘shit I am completely in charge of my own life’ and that came with being in charge of my own sexual desires and wants and needs and thinking I have never looked at it like this as I have always deferred to other people, and that is not how I want to live my life.”

You do not usually find such open and frank honesty on a record but this is no ordinary record. One that has been years in the making and is all the better for it. It feels cathartic. Hopefully, this year can finally see Anna B Savage take off like a tern or corncrake. The sky is not the limit.