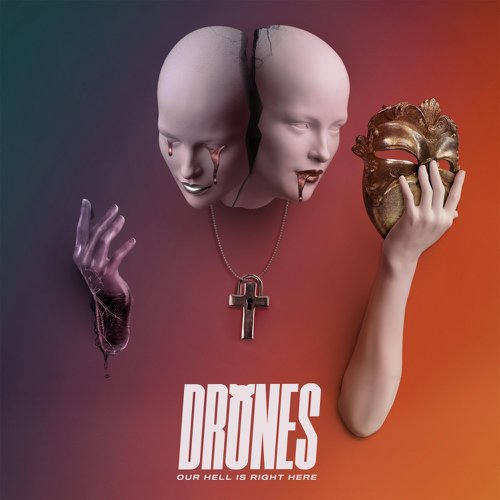 ‘Our Hell Is Right Here’ is the latest album by Drones which has been proclaimed as ‘high octane’ befitting the slew template of many a punk band.

After all, that was originally the order of the day surrounding the musical sea-change which defiantly shook up the mindset of many a wide-lapelled music exec 45 years ago: when grandiose epic sagas and odd time signatures had reached a nadir in popularity, and were temporarily jettisoned in favour of a ‘short sharp shock’. Hell, there was even a band called The Drones at the time from Manchester: Dr Feelgood-type pub rockers who moved to London and reinvented themselves as a punk band band.

However, what transcends the well-trodden truism for these Drones in 2021 is self-assertion – a byword for these troubled pandemic times. This is their prime motive here with plenty of reflection as opposed to innate rage. Such contrariness never did The Only Ones any harm. Singer Lois McDougall says:

“There are songs on this album that I had to write for my own therapy. ‘Our Hell Is Right Here’ is a product of my experiences over the past few months. There’s a lot of sadness on this record, but I can now look back and celebrate who I have become in spite of it all.”

There is a Janus-like quality suggesting that you have to be in a ‘certain frame of mind’ to appreciate the album like with Neil Young’s ‘Harvest’. I am definitely off-kilter with my genre references here, but I hope that that you get my drift!

There is no doubt that the songwriting is ‘meat and potatoes’ here. But in the cold Covid light of day, the album’s intrinsic appeal is that it is wholly nostalgic. Not just in a ‘punk’ way. The bombastic opener ‘Please Vacate The Planet’ gets things going in an almost NWOBHM fashion. Universally speaking, we all pine sweaty gigs, over-priced beer and the mosh pit, and that is well-conveyed in ‘Epitaph’.

These welcome ingredients are encapsulated in a helluva Cheap Trick or Radio Stars fashion with the wah wah drive and thundering drums of ‘Josephine’ ; the rattling chord-changes of ‘Grey Matters’ and the gasping ‘Manipulate’. ‘Live And Let Live’ begins with assertive singing and is redolent of the cavernous depths of a smoke-filled auditorium combined with a melodic sense of free-for-all chanting and brutal sheets of sound courtesy of guitarists Tom Thain and Tim Kramer.

The title track evolves into an evocation of Blondie or The Pretenders having an impromptu collaboration with The UK Subs. That is the album’s pinnacle. A Jam – like ballad diversion is the pitter patter acoustic sound of ‘Listen’ – a sugar-coated self-risposte against the album’s overall sense of electricity.

This album has, despite the weightiness of the subject-matter, a celebratory exuberance about it which Lois intended. It provides a porthole to a very recent time that we all remember fondly and with great reverence. ‘Our Hell Is Right Here’ will fill the interim hole over any introspective ambient soundtrack, anytime and any place.