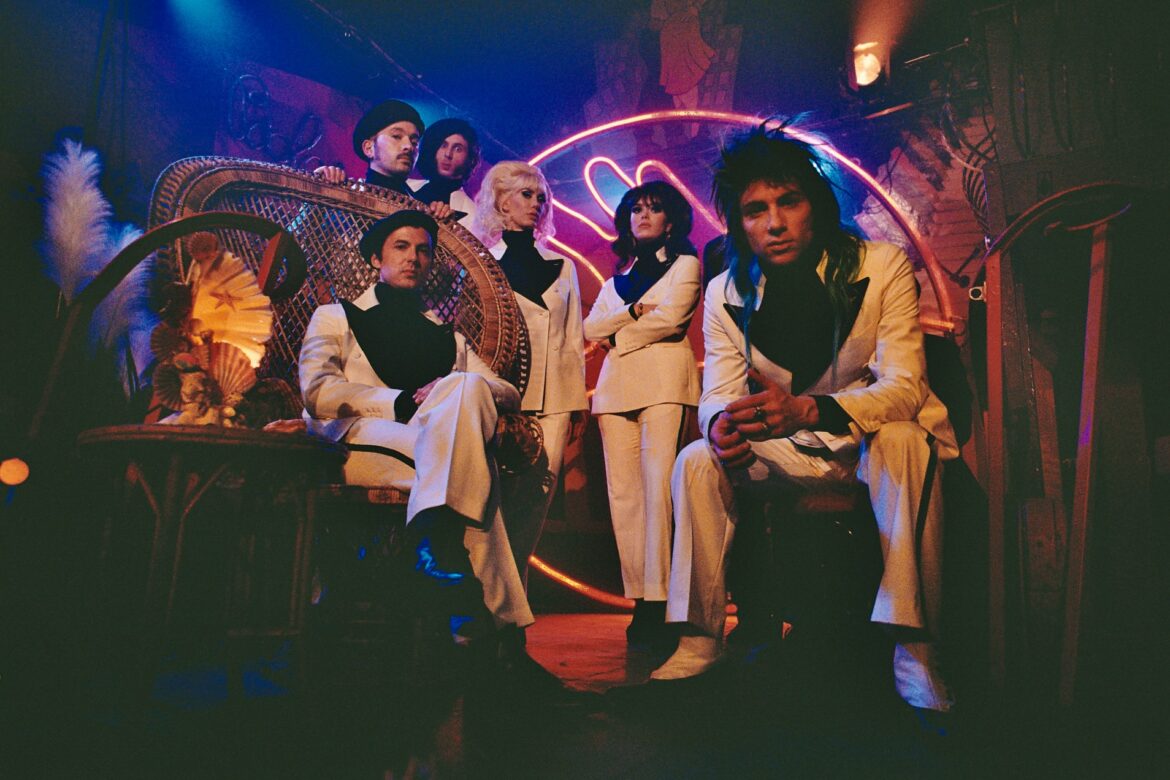 The story of La Femme agrees Sacha Got, one-third of the French psych-pop band’s core nucleus, is not unlike a scenario from a movie. All the romance of a road trip picking up if not passengers then good fortune from place to place. Got and school friend Marlon Magnée grew up in Biarritz in South West France, a  scenic town with a large proportion of the population at pensionable age, the rest visiting young and spirited summer surfers. The pair moved to Paris as young adults, forming La Femme in 2010 with bass player Sam Lefevre and famously recruited vocalist Clémence Quélennec via My Space.

La Femme played a 20 date tour of the US out of their own pockets, DIY-style, heralded by the Parisian music scene upon their return as pop stars who took on America, and won.

in 2021 and set to release their third album this week, La Femme exist in a world of effortless cool.

The new record Paradigms, the band’s ever omnipresent glamour in its sounds and visuals are very there, but with an added emphasis more than ever on viewing life through a cynical, fatalistic lens. Not resignation exactly, more an acknowledgement that life’s a bitch then you die, so to taste any pleasures to the absolute full. It’s a record of sad fucking, happy fucking, predictions of death and darkness delivered with wit.

And more road trips and travel.

Sacha is in his flat in his home town when we talk over Zoom. The recent single ‘Cool Colorado’ simply must be complimented early on in the conversation. On it, brass brightens the 60s and 70s psychedelia and rock guitar licks, kept in check by Sacha’s deadpan vocal delivery. Then there’s the Mike Flowers Pops-style wig in the video. And shades and a lounge lizard suit.

“Do you know this guy from England, Mike Flowers Pops?” he asks.

You must be reading my mind, Sacha.

“I discovered Mike Flowers Pops just after we did this song. It was a sign, you know?” he smiles, and adds Brian Jones’ legendary hair might have something to do with it too.

Did Sacha keep the wig?

‘Cool Colorado’ is a road trip song in itself, written after an idyllic pleasure-filled day in Denver, mid-tour. A perfect day, he recalls, of freedom and living in the now. Gifting him a very rare pure feeling.

“The weather was very nice and sunny; I was smoking. I used to smoke a lot of weed at this point, it was legal there and I had a feeling you could smoke outside. Nobody bothers you, you meet some nice people, simple feelings I tried to describe in this song.”

Combining the joy and beauty of melody with the gritty realities of life continues on ‘Paradigms’, full-on dancefloor party tunes to the melancholic and tender. The gorgeous dreamy and reflective ‘Le Jardin‘ is as sweet as honey, delicate but carrying the La Femme aftertaste.

‘Le Jardin’ came from Sacha having too many lager shandies and falling off his skateboard, ending up with broken bones and upcoming plans ruined.

‘I had a lot of time for thinking, you know. I was alone at the hospital and I was, “fuck I was going on holiday, everything was nice and then everything switches and in hospital with my hand broken and people talking to me in Spanish…fuck” but soon I realized I thought about it and wrote this song. It’s life, you know.”

“At any moment you can have an accident, have a sickness but at the same moment, you can read a great story and have good stuff in your life. You go from one end to another very quickly and dramatic things. Expect nothing from life is a good philosophy because if you expect too much you are always disappointed.”

‘Foreigner’, the sole song sung in English on Paradigms is electronic and highly danceable, and so bloody dark. It’s about a man who gets cheated on by his girlfriend (‘you fucked this guy without a condom, a DJ or whatever,’) and feels lost as if in a foreign, alien country. We’ve all been there.

“Sometimes you have to dance on your problems, you know?  It’s a good way to do music and to live. Dancing on the bad stuff of life and problems.”

La Femme describe the recording of Paradigms the album as messy but listening, it’s anything but. Slickly produced without losing any of the bite nor blending it out or concealing darker elements. It was made in France, the US and Spain – more travel adventures –  as and when, with sometimes gaps of weeks long between sessions.

“Instead of back to back recording we go with our laptop everywhere. Some takes are from different studios and some purists of music they are ‘oh, how is it possible, with me when I record, all the drums go in the same place, all the vocals in the same place.’ With us, it’s more a patchwork, of a lot of takes.”

If anyone comes up with a better analysis of the band’s ‘if Lou Reed was in Kraftwerk, playing in Parisian cabaret clubs’ description of the record, then let’s hear it. The Velvet Underground dark mood they like so much is felt, and Kraftwerk’s unique sense of mystery and artistic expression. Add the folding in of yé-yé, Serge Gainsbourg and Françoise Hardy make Paradigms exciting, sexy and simultaneously thoughtful, with that distinctive glamour to both eye and ear.

Visuals are an essential part of the band’s creativity and the relationship with fashion is ever-present, although Sacha is at pains to stress the musical focus firmly.  It is part of their identity to swerve the everyday, and the generic rock band look.

“When we began to make this band it was the fashion to wear white t-shirts and jeans and everybody had to look normal, play guitar on the roof which is really boring,” says Sacha. “We were ‘OK, let’s be more crazy, more crazy clothes.'”

They were muse to CELINE’s Hedi Slimane, who created a collection inspired by the band and used their music and looks for his shows and regularly features them in his photo diary Louis Vuitton also used their previous track ‘Sphynex‘ for the Runway Cruise show. Their track ‘Oh Baby Doll’ was also used for YSL mascara commercial starring Cara Delavigne.

“The fact of living in Paris, it is a fashion city by excellence. Because of that, we are in this world. We go to the fashion parties because there were free drinks and they invite us and it’s nice, you know.  People like to invite us to parties because we are cool and blah blah blah, but we are not fashion people, we are music people.  In Paris, fashion is everywhere, you can’t avoid it, everything is connected to it.”

The song on ‘Paradigme’ is eerily prophetic. “During the night the paradigms fade away, masks come off to celebrate the void and lunacy,” it goes. More masks. Written about before they got trendy.

La Femme are making a film. It’s a spoof of those old late night discussion programmes giving airtime to oddballs and eccentrics not permitted onscreen before dark when decent upstanding people were watching. It features all the songs on Paradigms, and Sacha stars as a philosopher, sucking on a pipe, pondering and talking nonsense. Whilst the studio audience hang on to his every word. It’s a mix of Monty Python and the Rocky Horror Show.

“Everybody will drink and smoke and saying stupid stuff.”

Are you still allowed to smoke in France?

He shakes his head, no. Then smiles and laughs, like he’s just thought of it. “That’s a good point to make a movie, you know?”

Seems everything La Femme live and breathe and create is in the mindset of It’s just life, so go ahead and live it. A fine philosophy, indeed.

Paradigms by La Femme is released on 2 April.