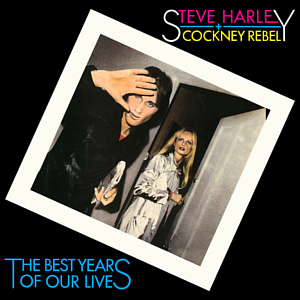 If you look back through the annals of history, I doubt you’d be able to find many better examples of an album’s lead single being so completely unrepresentative of its other content. ‘Make Me Smile (Come Up And See Me)‘ was, of course, an outrageously brilliant, flamboyant number, instantly recognisable from the outset and as infectious as yawning. Not that you’d ever find yourself doing such a thing while that well-deserved number one smash was playing.

The Best Years Of Our Lives, however, marked a departure from the irresistible commercialism of debut album The Human Menagerie and its follow up, The Psychomodo. In short, this third record was daaaaaark, man! Not that Steve Harley hadn’t already flirted with controversy on those first two albums, but you just need to consider the lyrics to ‘It Wasn’t Me‘ to get some idea of what I mean: “It wasn’t only me who blew their brains/I certainly admit to putting chains around their necks so they couldn’t move,” and “Now you say I’m responsible for killing them/I say it was God, he was willing them.”  In the same song, Harley sings of breaking a woman’s heels and throwing a kitten in the fire (“that was so fantastic, he burned like a matchstick“), all set to a woozy semi-jazz arrangement that suggests, if we needed any further evidence, that our protagonist is clinically insane.

This is further explored on ‘Panorama‘, opening with the line “Murder follows me like a leech from sunset, hard on my heels to the midnight beach‘, this time musically a cross between honky-tonk and the ‘higher end’ of glam, Mott The Hoople perhaps being the obvious reference. Even the album’s second and final single, ‘Mr Raffles (Man It Was Mean)‘ contains some eye-opening imagery: “Remember the time, what a time, we had down in Barcelona after you’d been slaying babies,” then “and then you shot that Spanish dancer“.  There’s little doubt that Harley, having now dumped most of the band who formerly made up Cockney Rebel (after they insisted they wanted to write more songs themselves), knew just what he was doing here with his new members, courting attention with hard-hitting prose that was always going to get noticed.

Don’t be misled into thinking The Best Years Of Our Lives is in any way morose, however, it isn’t, and even allowing for the fact that there are very few moments that would pass for ‘choruses’ here, give it a few plays and you’re soon singing along. Some of it is genuinely uplifting, such as the stratospheric outro to ‘Back To The Farm‘, and there’s a subtle little nod to the lyric of blistering opener ‘The Mad, Mad Moonlight‘ which speaks of “a blue orange”, this double vinyl of the reissue resplendent in these two colours respectively. It’s just one of the many lovely touches that makes this release worthwhile.

As mentioned previously, this is a double vinyl release, the first vinyl comprising the original album, and the second housing the rough mix of ‘Make Me Smile‘, which is a fascinating insight to how the track progressed, Harley not yet having elongated his pronunciation of each verse that gives the song its identity. Then there’s the bonus track ‘Another Journey‘, from the b-side of that chart-topper, the single version of ‘Mr Raffles‘, an acoustic version of the title track and, on side four, two explosive versions of ‘Mad, Mad Moonlight‘ and ‘Sebastian’ from their 1975 show at the Hammersmith Odeon.

As great as those first two albums were, The Best Years Of Our Lives was a real game-changer, and surely cemented Harley’s reputation as one of the great songwriters of our time.