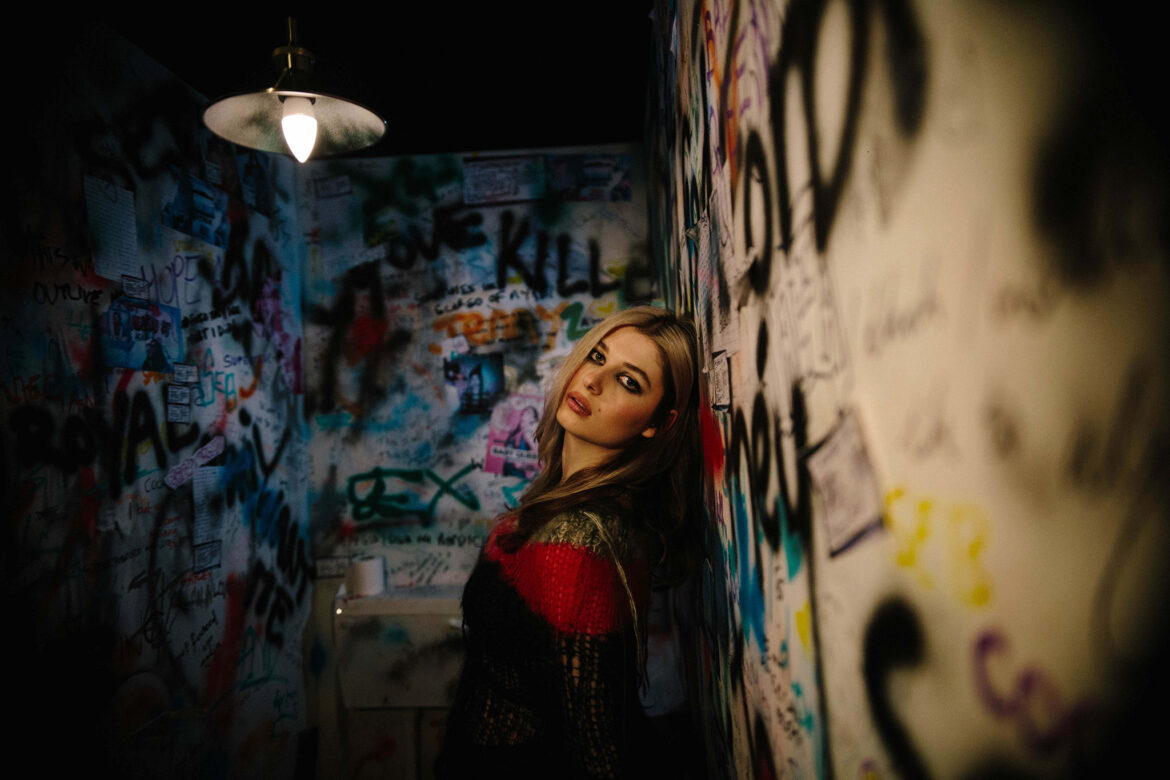 Baby Queen is the pop alter ego of 23-year-old South African-born, London-based Arabella (Bella) Latham. She’s been tipped by many as the next big pop sensation after bursting on to the scene last year with a clutch of self-aware hook-laden pop tunes.

It’s not just her ability to craft irresistible pop music, it’s also her honesty, self-deprecation, and acerbic wit which has struck a chord with her online fan base. She addresses her clinical depression on ‘Buzzkill’ deadpanning lines such as “Flaws don’t make you special, they just make you flawed/ What doesn’t kill you makes you wish that it had” whilst ‘Pretty Girl Lie’ touches on the craving for online validation through the pervasive nature of filtered images on Instagram as Latham sings sarcastically “I get more likes when I don’t look like me”. And it’s that ability to get to the heart of the matter with laser-like precision that has marked out Baby Queen as a potential Gen Z pop icon in waiting. Her recent Medicine EP is a mix of satirical art-pop that at times can conjure up Christine and The Queens colliding with Taylor Swift by way of Wolf Alice.  Even Courtney Love is a big fan and has been effusive in her praise.

Growing up in Durban, South Africa Latham felt totally isolated from what she saw as the glitz and glamour of the music business. “I felt I was living in a completely different world, a million miles away from all the things I saw on the TV and in magazines” she explained on a recent Zoom call. And with the blessing of her parents, Latham moved to London to pursue her dream, determined to become a pop star. Initially, it wasn’t exactly plain sailing. “To be honest it was a real culture shock, I was stepping into a completely different world.  At first, I was super starstruck, I had a total “bright lights syndrome”. I think the first three years were the hardest as I didn’t really know what I  was doing. It took me a long time to make friends and have a world here because my whole world and life were on another continent. But now I feel London is totally my home.”

She’s described her music released under the Baby Queen moniker as “anti-pop” promoting the view that pop doesn’t necessarily have to be throwaway or vapid, that it’s perfectly possible to intelligently address weighty themes allied to soaring pop music. “It’s exactly that” she enthuses “pop music doesn’t have to be fucking shit. Pop music can be so culturally important, I mean ‘Nevermind’ by Nirvana by the definition of what pop is could have been considered the pop music of its time. Pop used to mean just what’s popular at that time. But the term “pop” has become so watered down, it’s become meaningless. It’s also become shit because artists simply go shopping around booking different sessions with the same producers. So for me, Baby Queen is about transcending that model, it’s about  breaking out of these narrow boundaries of pop and being transgressive as an artist.”

For Latham it was important to lay down a marker when she began releasing music, making a statement to say, Ok here I am and I’m writing about subjects that matter to me, subjects which perhaps pop artists are often told to avoid. “Actually the first song I wrote that became part of the Baby Queen universe was ‘Raw Thoughts’  which came out recently. But it was so clear to me that when I wrote ‘Internet Religion’ that it had to be the first release.  It did feel like a statement of intent. I think if you begin with a song that’s all about love, well, that’s what everybody else is doing and is not really what Baby Queen is about. I always tell people if they want to get what kind of an artist I am then they should listen to ‘Internet Religion’ first.

Adopting a stage name can often embolden an artist and allow them to take more risks and Latham agrees that creating the Baby Queen personae does afford her some degree of protection. “It’s amazing to be able to separate yourself from this thing, to be able to come home and just be yourself. Then you can take the stories that are in your own heart and put them into something that amplifies that. For me, that’s what the name Baby Queen is all about the amplification of the self, it’s bolder and bigger and riskier than me in many ways. Essentially Baby Queen would perhaps do the things that Bella never would. Basically, Baby Queen is there representing the bravery that I never had in myself to amplify who I am”

Latham is keen to point out that despite the caustic wit in her lyrics she’s not targeting or judging people.  “The whole thing about my music is I’m not pointing the finger at anybody else, the fact is I’m the ultimate GenZ internet addict, so it’s never about blame,”  Even a  song like ‘Pretty Girl Lie’ which begins with the lines  “Edit my legs ’til the doorway bends/It’s easy to do, you can ask my friends/We don’t give a fuck about the message we send/If we look perfect when we play pretend”  which acerbically examines the filter-happy airbrushed picture-perfect world of Instagram isn’t attributing blame. As Latham explains it’s simply highlighting something we all know exists.  “I think subconsciously that was something I’d wanted to address for a long time” muses Latham  “I was on zoom with my producer bouncing ideas about and when I wrote the middle eight “I’ll break the mirror so I look the way I feel/ My role models were never real”  it felt like a tap opening and I was like OMG I can’t believe I haven’t thought to write about this before. It was really important to me because I grew up with such extreme body dysmorphia and self-hatred and all that sort of shit. I mean no one talks about how fucking fake everything is and how affected we are as young women, as young people by these complete falsities. And yet everybody buys into it even though we know it’s all fake. So it was me saying this shit exists basically.”

For an artist who has been getting an incredible amount of “buzz” you might expect Latham to be frustrated that a global pandemic has curtailed the chance to play live and “launch” in the traditional sense, but she remains refreshingly relaxed and down to earth about it. “It’s a terrible situation for everybody,  I’ve been lucky in some ways”  she reasons “I mean I would have hated to have just released an album and be about to go on a big tour, and have it cancelled, that must be incredibly frustrating for artists. For me, I signed my record deal during lockdown over Zoom, so this has basically been my only experience of the record industry. Obviously, it is frustrating not being able to play live, but I’ve actually had a level of shelter not normally afforded to emerging artists.  Normally it’s straight out there and onto the circuit.  So for me as someone who struggles with a lot of mental health issues, it’s been good for me to be kind of eased in.”

There will be more Baby Queen music and hopefully live gigs this year and Latham reveals she’s working on her debut album. “It’s very dream pop,” she says “I wanted it to be really beautiful sounding and I’m writing about different themes and being super honest about what I’m going through. In fact, I’m trying to push the honesty to a place where it’s actually quite  uncomfortable to listen to.”