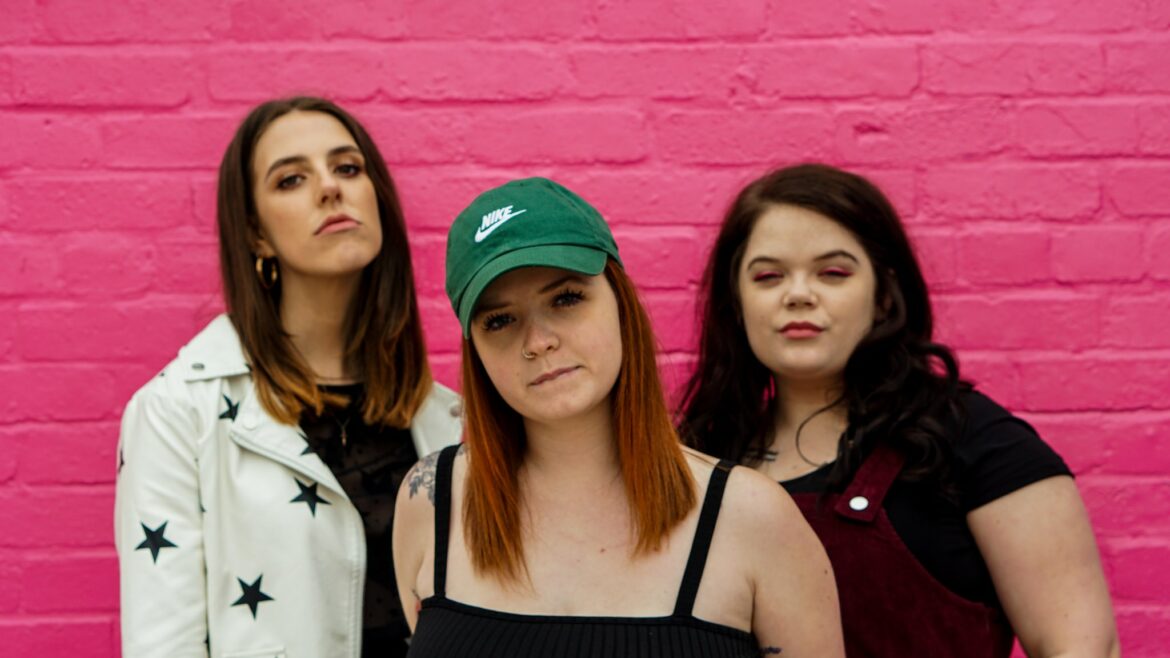 You have to admire the proactivity.  Rather than being consumed by the frustration and negativity around the lack of female representation on many of the festivals being announced, three friends decided to create their own with the Girls Firmly To The Front.  And so the No Man’s Land festival was borne.  It will take place in Manchester on 14 August.   All proceeds to Safe Gigs for Women.  The first bands announced include 3-piece Riot Grrl band Brat Coven from Glasgow, Big Fat Big, 5-piece rock/grunge band The Wine Fund, and Qlowski who release their debut album ‘Quale Futuro?’ on 4th June.  More bands are to be added to the line-up.

I put some questions to the ‘No Man’s Land’ team.  I wanted to know how easy it was to arrange, what the response has been to the creation of this new festival, and perhaps most controversially, are men welcome?

Welcome, ‘No Man’s Land’ team!  Please can you introduce yourselves and tell us a little bit about your background…

So I’m Katie I’ve just turned 20, and I’m a music journalist by career plus I’m also a music journalism student.  The music industry has always had a hold on me, from being a JLS fangirl to being where I am today. I’ve been overly aware of the inequality in festival line-ups for years and now I’m in a place where I can do ‘No Man’s Land’.
Hi I’m Eden, I’m doing Law at Warwick University but spend all of my spare time surrounded by music and going to gigs, and that’s how I met Katie, so it’s an industry I’m very interested in working in, especially if I can have a positive impact.
Like Katie, I’m (Niamh) a music journalism student at BIMM.  I spent my teenage years growing up in Australia where I got involved in putting on live music events in high school.  Growing up here also kickstarted my interest in feminism and gender politics which has been a big motivating force behind ‘No Man’s Land’.
Why did you decide to create the ‘No Man’s Land’ festival? Did you have any other ideas first, or from the very beginning did you want to put on a music festival?

‘No Man’s Land’ all started within me (Katie) and it travelled to Eden through a voice-note which she ignored because she was watching Tik Tok’s and thought it wouldn’t be anything of importance.  From there I sent a very similar voice note to Niamh and it’s honestly grown at an alarming pace since then.

It all started out as a gig with 4 or so artists involved but the demand we got was so overwhelming it just had to become the festival it is today.
Let’s clear up one question from the start – are men welcome at ‘No Man’s Land’?
Yeah of course men are welcome, so long as they support the cause! We want this festival to be a safe space for everyone, everyone’s welcome, just don’t be an idiot!
How did the line-up take shape?  Did you approach bands or did they approach you?
We were approached by the majority of the bands and artists that are on the line-up.  There were so many people wanting to be involved that we actually had to reject some.  When it comes to some of the ‘bigger’ artists that are in the second wave, we approached.  Some of them rejected us but their support was overwhelming still!
What has the response been from music lovers and gig goers?
It’s been bigger than we ever could have anticipated, we get so much love on social media and especially on Twitter. It’s really nice knowing that this is getting the support it deserves, we’re really grateful for everybody who wants to be involve and for the people who are supporting us daily.
So early days I know, but is this a one-off, or possibly an annual event?

Very very early days but we’re hopefully making this an annual thing. ‘No Man’s Land’ will only get bigger from here and it’s definitely going to be here forever.  Also, who knows, it may be more than just a festival.

‘No Man’s Land’ Festival is on 14 August at YES, Manchester. Early bird tickets are available now to mailing list subscribers.