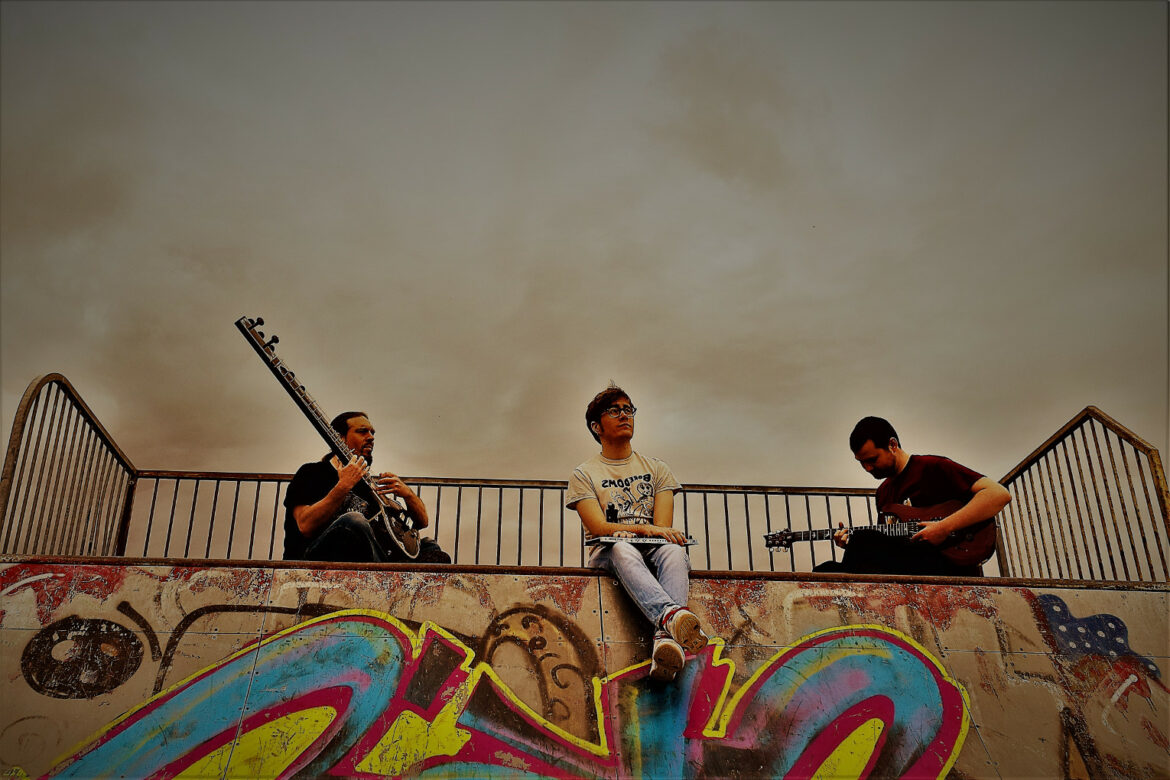 It’s a more song-based, structured affair than their previous releases, and feels like an interesting evolution for their sound – a dynamic mix of psych rock, ambient electronic, and hypnagogic pop, loose and well-structured at the same time.

The tracks are full of weird tales, inspired by the lost archives of the “definitely real” Ernest Wilmington, late proprietor of the now demolished East Maindy Conservative Club and president of the Sixth Unofficial South Wales Paranormal Investigation & Archival Association.

Song topics include; an abducted folk singer’s farewell to Earth, a duck that sneaks into nightclubs disguised as a human, a dentist who claims to exorcise demons from people’s teeth, and an alternate 1999 Christmas where a single vengeful act of petty crime leads to a nationwide hysteria and a cult of vigilante robbers dressed as astronauts.

I had a chat with Lloyd Markham, the band’s conceptualist and synth wizard, to find out more about the record.

How did you discover the archives of Ernest Wilmington?

We found them in the East Maindy Conservative Club. I was doing some agency work at the time – there wasn’t much else going in Bridgend, so you’d sign up for a few agencies. Sometimes you’d just be pulling pints in the stadium, but sometimes they’d get you to do weird things, like one time we deconstructed a sort of makeshift hotel that’d been set up for the rugby – getting these really gross mattresses out of these little portable hotels.

And one of the things we had to do was try and clear out all the furnishings in this pub that was going to be stripped bare and demolished, and I found the notes stuffed behind a radiator. They’d been left out and someone had doodled on it – I think they’d been through two or three owners at that point. Anyway, that’s the canonical answer – the real answer is I made it up.

What can you tell me about the East Maindy Conservative Club?
That was just where they met – The Sixth Unofficial South Wales Paranormal & Archival Association. I liked the idea of this weird conspiratorial group hanging out in there, that maybe it was a bit of a breakaway organisation, sort of like ‘The People’s Front of Judea’, you know.
Like, ‘I refuse to hang out with these people who believe in aliens but don’t believe in the Illuminati’. I imagine when you invest a lot of time in things like that, a little friction over little things can cause big issues.

Is there any news on the disappearance of Dai Bridgewater, or is his fate still a complete mystery?

Still a mystery. The last we heard about him was in the archives – he’s been missing since the mid-2000s, a bit before the recession. There is a man who looks suspiciously like him in our band, though.

Where did you record the album?

We recorded in a really fancy studio called “my bedroom” – the loft room I used to live in. Very cramped conditions, but we came out quite well all things considered. It’s a good thing we don’t have a drummer!

Did you start with the stories and concepts behind the songs, or did the music come first?

Definitely started with the music. It was very much just us kind of goofing around off the cuff, then I came up with the concept afterwards to connect them all together. Most of that came out of ‘Astronauts‘, the track where Mitch (Mitchell Tennant of the band Head Noise) does his rambly spoken word thing.
I quite liked this sort of oddball character of Ernest Wilmington, he made me laugh, particularly when Mitch gave him the voice, which was not the voice I was expecting – I was imagining him more as a posho in my head, but he gave him this really thick Valleys voice.
I mostly wrote a lot of the lyrics for that one and then Gareth (Davies) massaged them into something that fit with his vocal style. I thought it would be fun to see if I could connect these things together, and I realised there was a conspiratorial thread running through a lot of the tracks – like ‘Abducted’.
That was kind of an interesting one; our plan for that song was about a folk musician at the end of his life, his wife’s passed away, he’s all on his own and then he gets abducted by aliens and has a second life as a musician in some kind of space bar and this is the kind of letter he’s writing home.

Gareth (vocalist/sitar player (sitarist?)) plays the folksinger in the song – he was born for that role, wasn’t he.

Yeah, he is a very chill, psychedelic kind of guy – that was the perfect character for him (laughs). A lot of the concept for the album originally started cause we’d done a lot of more loose, jammy stuff, like I think that kind of reached its peak on Hit Singles From The End of the World (2018), with these very long kind of ambient things. Then I had a bit of a gear upgrade and I started being able to do much more concise, tightly structured tracks.
We’d also been playing a lot in these small Valleys venues and stuff like that, odds and ends. We’d had a couple in Cardiff that had gone quite well, but we were playing in other sort of places where it had been a kind of mixed reception and everything, and I thought a lot of people were just a bit snooty and dismissive.
So I thought ‘what if we show them we can also do an absolute banger that’s just in and out in 3 mins’, so we have that in our repertoire. Kind of, ‘we can prove you wrong, we’re not just a jam band’.

It definitely feels like an evolution of your style.

Yeah, big time. Some of the tracks…like, ‘Embers‘ was a Gareth special, it was one of his folk tracks, and we just thought ‘why don’t we build some synths around it’, effectively what was originally a simple acoustic kind of verse-chorus song. And Luke (lead guitarist) wanted to do more tight, constructed sort of tracks as well – that’s Luke (John, guitar)’s kind of taste more, he’s not so much into the loosey-goosey abstract stuff.
At the moment what I’m trying to find is a nice middle ground, there’s some tracks that get that perfectly, like ‘Embers’, ‘Umbilical Pi’ and also ‘Duh Boiiiz Inebriated’ has that kind of vibe. But I definitely think with our next one we’re going to have less dense mixes, just think about the mix when we’re in the composing phase instead of having 12 layers in there, haha. That was the thing with getting the new fancy gear and everything, like ‘I can do so much, I can just fill a room with so many sounds, and realising ‘I can…but should I?’
We’re looking forward to working on some more stuff. I think our next step is to try and be even more tight.

How has Coronavirus affected your activity as a band? Have there been any unexpected positives?
I guess the one thing was that we did do a little weird track called ‘Squircle‘, just a little thing – basically Gareth and Luke recorded their parts separately and sent them over to me and I’d layer and chop things up.
‘Squircle’ has a really great sound, I really do like that track, and I’d like to explore some more stuff like that, but it also was kind of quite a laborious process in some ways.

Are you still having trouble with your interdimensional zoom connection?

Haha, we’ve definitely managed to get it sorted out. The funniest thing about that whole music video concept is that me, Luke and Gareth have never had a Zoom chat – we’ve just chatted on Whatsapp occasionally.

So it is almost like a Zoom call from another dimension, then, in a way.

Yeah, it’s a parallel world where we actually had a Zoom call, haha.

Have you ever had any supernatural/inexplicable experiences?

To be honest, not really. At least, nothing super exciting. The closest is probably in the shop that I’ve been working in for a bit – I work in a little corner shop/off-licence in Cardiff Bay, and sometimes, just randomly, stuff will just fall off the shelf without any logical explanation.
I’ll be watching it on the camera, and it’ll just be some pasta or whatever that’s sitting there, completely fine, and then will just fall off. So we like to say ‘oh, the ghost’s a bit grumpy today.’

Do you believe in ghosts, or aliens?

Not really ghosts. Mathematically, there’s probably some kind of aliens out there. They’ll probably be completely different to anything we’ve got in our pop-culture imagination, though – it’d probably be some weird fungus or something. It’d be very confusing, probably, more than anything else. But I don’t necessarily believe in ghosts. They’re fun though. It’s a fun idea.

What plans do you have coming up?

Gareth and Luke are going to come down and see me in May and we’re going to start working on some brand-new material, which is going to be fun. We’re mainly thinking it’s gonna be an all-electric setup, cause Gareth’s going to use his electric sitar, and Luke’s going to be playing bass.
We’re thinking something kind of dancey and psychedelic, cause we’ve missed being in a live setup and we don’t want to do a gig and be like ‘let’s play dreamy numbers!’ No – we want to do some upbeat, uptempo stuff that makes people wanna move about.

The Boys Cosmic by Deep Hum is out now.