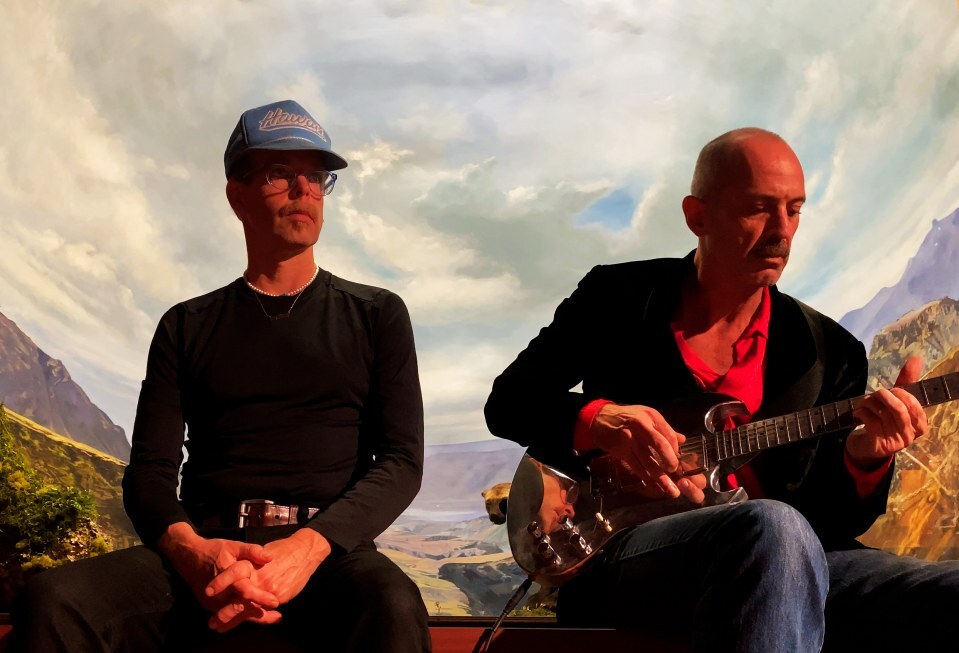 Superwolves is the new album from Bonnie ‘Prince’ Billy and Matt Sweeney. It’s the newest fruit born of a collaboration stretching back to their last album, 2005’s Superwolf, and it’s a welcome sequel to that classic album, singular becoming plural.

The record’s alt-country neofolk feels individualistic and eccentric, warm and bright, with some twists and turns along the way; veering between melancholic and celebratory.

Prince Billy and Sweeney have a defined collaborative process, first writing separately and then bringing together their solitary imaginings. Billy sets lyrics to Sweeney’s guitar from a distance, then they come together and further refine the tunes, gradually shaping them into life.

They take a free, fluid approach; words implying vocalisations to counter and support, and melodic guitar parts suggesting harmonic extrapolations. Superwolves is a creature that evolves; guitar and singing both taking vocal and expressive roles.

Standout track ‘Hall of Death’ is the rockiest moment on the record and was released as a single. Instantly replayable, with a great hook that wedges itself in your eardrums and refuses to shift, it features visionary Tuareg guitarist and producer Ahmoudou Madassane on guitar.

This fusion of Tuareg (a form of sub-Saharan desert blues rock, made famous by bands like Mali’s Tinariwen) with Superwolves‘ established alt-country/neofolk style is unexpected and fertile, finding common ground and reminding us again of the universal power of “folk” music and its ability to cross boundaries.

The performance was recorded live in the studio with Madassane’s band, giving it an undeniable immediacy and warmth. The lead guitar on this track is pretty astonishing and wild; vibrant and expressive, it bursts from the speakers and fits perfectly into the spaces created by the rest of the band.

‘Hall of Death’ is one of the very few songs on the record to feature any drums, and feels all the livelier for that, bursting into motion with an offhand acapella vocal fill and some of the slinky, serpentine fluid waves of phaser guitars that pop up across the album. The syncopated, droney groove is joyful, bouncy and youthful, landing somewhere between krautrock, garage rock and Appalachian folk.

The lyrics are ominous yet hopeful, repeating ‘I’m gonna walk down the hall of death again’ as a deadpan mantra. The frantic, leaping, virtuosic guitars contrast the sweet, yearning melody, like attending a particularly wild wake. This would be a great festival tune mid-afternoon on a sunny Sunday at Green Man or End of the Road; spring-cleaning the hungover shadows of the night before.

The duo also interpret genius Irish songwriter and guitarist Paul Brady’s beautiful song ‘I Am A Youth That’s Inclined to Ramble’. It’s a convincing, sincere rendition with some crunchy humbucker tones emerging as the track progresses, balanced with more of those sweet phaser guitars.

The cover comes to a powerful climax, Billy’s emotional vocal rising to an intense pitch above the tidal drift of the music.

It’s the longest track on an album of mostly short songs, and has an illuminated clarity and powerful stature, a strong contribution to the long tradition and dialogue of Irish-American songs of lost love and wayward travel. It might be the strongest performance on the record.

‘My Blue Suit’ is another standout, a concise, fragile love song, although it’s ambiguous whether it’s platonic or romantic love.

The melody unfurls above delicately picked acoustic guitar, painting a picture of a sincere relationship full of pathos, the singer generously singing to their subject; ‘happily I throw my hands up, fully I surrender here, you can have my every footstep, and claim them, loan them, full and clear’.

It’s a humble, warm performance tinted with dry humour, as Billy repeatedly croons ‘you look better in my blue suit than I do’. The chord progression (especially in the bridge) reminds me, somewhat unexpectedly, of Phil Ochs‘ gentler moments.

The song feels like eavesdropping on a quiet private moment between lovers or intimate friends – the small mundane gifts of the moments we share every day. The singer seems to generously admit their own shortcomings, making a gift of their own honesty and acceptance of their flaws; ‘you really wear my blue suit better, you wear it smarter than I do’.

This is an album that’s worth your time, full of the rewarding spirit of collaboration, freely delving into deep, un-dreamed of spaces with its honest, fluid, raw and human songwriting.