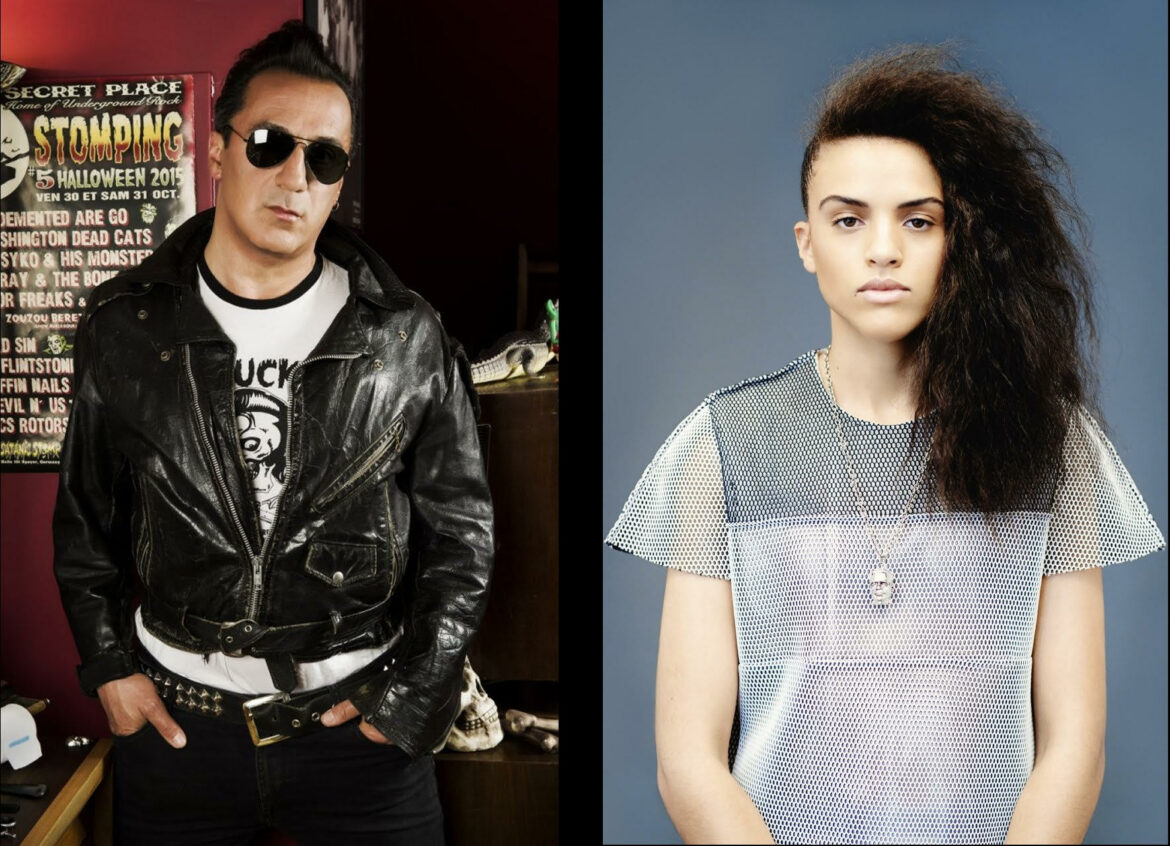 Bringing together singer-songwriter and Welsh born MC Jenna Dickens aka Rude GRL, burlesque star Bunni Morretto and Chris Constantinou, who started out as Adam Ant’s bassist, as well as collaborating and writing with the likes of Annabella Lwin (Bow Wow Wow), Sinead O’Connor, Lou Reed, The Wolfmen, The Mutants, and more. Together they craft a refreshing and urgent collision of hip hop and punky rock riffs.

Lead EP track ‘Like Wow’ is a powerful, vibrant and kinetic cut that ripples with Rude GRL’s fiery bars, that seethe with energy, wit and a release of frustration above Chris Constantinou’s scything guitars and frenetic beats.

We caught up with Rude GRL & CC to get to know them and their work a bit better.

Hey how are you today ?

Rude GRL: I’m all good thanks! Kind of sane…

Bunni Morretto: I’m good thanks, enjoying the sexy sun & I got scratched by a squirrel! Last week I got bit by an otter. They told me not to stroke it but I did anyway #Winning…

CC: I met Jenna AKA RudeGRL through Sony-ATV publishers many years ago …we wrote a load of stuff with Marco from the Ants, then Jenna took a break from the music biz …years later I was up late and had this memory of a band I had seen play at a pub in Finsbury park …the place was jam packed …they were a 3 piece playing dance music meets rock live …they looked amazing and sounded great! The drums falling to bits and this guy hitting the bass drum hard …the singer and bass player with massive afros …i thought I’ll send Jenna a text and see what’s she’s up to …maybe she wants to have a go at this sort of thing

Rude GRL: I’ve known CC since I was 17 through a mutual connection at Sony, and we reconnected again a couple years ago when he text me at 3am asking if I’d be up for working on a project he had with Universal which we released on the Anthemic Hiphop EP! We actually ended up winning an award for best hiphop track at the PMA’s in LA for one of the tracks which was pretty LIT! Haha. Me & Bunni have been in a relationship for coming up to 6 years now!! I brought her to the studio & from there we became a band!

Bunni Morretto: I’m Rude GRL’s partner and I met Chris through her, we all click, which is really nice.

There’s a real vibrancy and abrasiveness to the tracks on the EP were you trying to capture that energy of plugging in and playing?

CC: YES! 100%!!! We set ourselves the task to write and record one track per hour …so the whole album was written and recorded in 12 hours

Rude GRL: YAAAS! I neeeeded to let a lot of stuff out, and I love the idea of making music that hopefully others can also use to let go of some of that built up aggression too. CC was like let’s just knock out one track an hour & I was well up for that challenge and it actually made it mad exciting haha! It was like being at Thorpe park on speed.

The sound is a really bright mash up of punk rock, grime, hip hop and pop…did the sound develop in the studio or did you have a vision before hand?

CC: Apart from the band in that Finsbury Park park on a sunday lunch time I saw, we didn’t have any specific plans

Have you actually been able to play a show yet or has pandemic lockdown scuppered that so far?

CC: Nothing yet but got our first date in for playing FOCUS festival October in wales …before that we may be playing PUNK ROCK BOWLING in Vegas / LA and San Francisco in September. Just getting going on that now that things are opening up

Rude GRL: We literally can’t wait to play live and have been constantly on Whatsapp crying to each other about it hahaha! But on a serious note we are getting some gigs lined up now which we are really gassed about. Getting ready for rehearsals coming up soon!

Bunni Morretto: Lockdown has put a stop to most plans but things are opening up which is really exciting and we have some super fun gigs lined up #WatchThisSpace.

Jenna (Rude Grl) says Killer 16 is about “getting all of that trauma and anger out and channeling it, instead of being really destructive with it.” Do you find recording music therapeutic for processing the chaos and injustice around us?

Rude GRL: Yeah, I honestly feel like sometimes it’s the only way to express it in a safe way… growing up I’ve used many methods of trying to express all of the overwhelming feelings from traumatic experiences like racial abuse, sexual abuse etc but a lot of my coping methods were really destructive… addiction wasn’t a great look. When I write it out it’s like I can get to the core of the emotion & then recording it really feels like a release of the energy.

Is This Love is really accessible but speaks to overcoming struggles of growing up, do you find songwriting can help you grow?

Rude GRL: 100%! I do feel that songwriting & other art forms can help me process my emotions better than just talking it out sometimes. Talking it out obviously is a really important part of processing stuff but using art to express the emotion is like it hits a deeper layer in a way that sometimes can’t be expressed by just running through the story… it gets to the deeper emotions & helps to express them in ways sometimes only a melody or a roar or scream can. So it’s definitely helped me grow emotionally for sure.

CC: I had a lot of racial abuse as a kid and got into a lot of trouble so the music was a way out for me.

‘Like Wow‘ was the first track I heard of yours, it’s really vibrant and exciting with great flow and visceral riffs and beats, how did it start life and what’s it about?

CC – Thanks! Jenna had missed her train home and we had an hour to kill so said i just started jamming out this bass riff through a fuzz box to this massive beat that Nick had sent us and Jenna starting singing LIKE WOW and the rest and that was it

Rude GRL: Aw thanks so much! That’s lit! I’m so glad you’re feeling it. Like WOW was literally born in 10 minutes haha. I had a bit of time before my next train at CC’s studio & so he chucked on this beat that Nick had made & he started playing this sick riff! I just felt possessed by it haha & suddenly these lyrics came pouring out. CC quickly set up the mic in the booth (which we rarely do) & I went in there & sprayed out all this madness & I was just like “wow” haha so I said it out loud & tadaah there’s the hook.

It’s about breaking free & living your best life! It’s in the spirit of like I am who I am and I came here to slay and I won’t let anything get in my way of doing that. It’s a fight song taking back ownership of your life, reclaiming what’s yours & being unapologetic about it.

Chris, you started out as Adam Ant’s bassist, as well as collaborating and writing with the likes of Annabella Lwin (Bow Wow Wow), Sinead O’Connor, Lou Reed, The Wolfmen, The Mutants, how does the process differ from your previous experiences in the studio?

CC: When we recorded the Adam Ant album VIVE LE ROCK with Tony Visconti it was pretty much one takes for all so it was very quick. The guitars took the longest as there were so many set ups, sounds etc which Tony was great with. With Annabella she used to come around to Bob’s [The drummer who played with Adam Ant] place. I arrived at Bob’s ..we said hello … no tea or coffee …he gave me the guitar lead …I played the bass and guitars and Annabella sang. We took away the track and worked on it then we would record the vocals in another session. I think I have hundreds of unreleased songs from that period. With Sinead O’Connor, we sent her the backing tracks and she wrote the vocals/lyric then we would get together at Raezor Studios and record her vocal. On ‘Jackie Is It My Birthday’, Sinead sang and recorded the vocal in Ireland and then sent it over to Courtney Taylor-Taylor who mixed it at his studio in Portland. The Lou Reed track we recorded with The Wolfmen, I wrote a verse and bridge to go with Lou’s “DO THE OSTRICH” section. I sang it ..sent it to Lou and he loved it ..that was that …The Wolfmen writing process for the first album was me and Marco working on Pro Tools, then we went into Raezor and recorded with me singing and playing bass / flute etc. The second album I brought in a load of my songs like ‘Jackie Is It My Birthday‘ etc and Courtney Taylor-Taylor from The Dandy Warhols and Steve Musters produced it. That was a pretty standard recording progress. The Mutants was a pretty quick writing/recording process except each album was made in a different country with a load of guests

CC: Jimi Hendrix on Guitar on the next RudeGRL & CC album

I hear you have more of a show planned for live shows, I bet you can’t wait to get out there and show people what you’ve been working on?

Rude GRL: Hell yeah! It’s going to be lit! We have all types of punk rap stripper madness in store.

Bunni Morretto: Hell to the yeah! It’s really exciting stuff. We have a lot planned for live. I’m bringing burlesque & twerk to punk – rap and we have a whole load of incredible strippers ready to go 😉 But I won’t spill too much 😉

I read you have an album planned will it be more in this vein or are you still working on it?

Rude GRL: We actually have 2 albums haha! Our debut album is coming out this year & its ram packed of mad energy!! Lots of exciting genre bending madness in store, and we are currently working on a Women Empowerment EP with Universal, as well as working on our 2nd album!

Bunni Morretto: We have two!!! We also have an album based all around Women Empowerment with Universal, it’s such an empowering album but in such a fun way because we can all twerk, be empowered and be powerful AF at the same time!