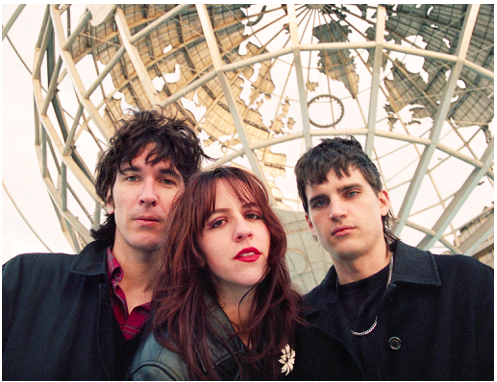 The sound of a band enjoying themselves playing live: it’s supercharged with awesome fuzz trailed guitar riffs, flowing boy/girl melodies and bounding percussion. It fizzes with the effervescent power-pop of Blondie and
The Primitives, melodies that touch on early R.E.M. or the guitar sounds of Jesus and Mary Chain. It’s an album that plugs into sounds of the 80s and 90s but unlike much of the lad bands that populate this year’s festival lineups, it sounds utterly infectious and refreshing. A release of frustration after eighteen months of lockdown, it’s a supercharged guitar album ripe with bittersweet life-affirming melodies, it’s the kind of record that can restore your faith in the ability of guitar music to excite.

A cornerstone in the continuation of the DIY and post-punk crossover scene in the US, UV-TV are founding members Rose Vastola (guitars/vox), Ian Bernacett (guitars), plus latest recruit Ian Rose (drums). Releasing their debut demo in 2015, the band have released a series of electrifying releases including two albums, 2017’s debut full-length Glass, and 2019’s follow-up Happy, with their sound evolving with each record they stamp their name to. We caught up with guitarist and songwriter Ian Bernacett to get to know UV-TV a bit better.

I’m pretty good. I just got my second vaccine shot and we have band practice later today so we’ll see how it goes.

Rose and I met in Florida years ago at a show. We ended up liking a lot of the same music and were in bands that had just broken up. I had a decent recording space so we just demo-ed things for summer and the rest is history.

We met Ian Rose a few years ago in NC while touring. Long story short we found out he moved to NYC and were instant buds. We kinda formed this little gang and play in each other’s bands. His project is called Status Set and you should definitely listen to the record he just put out called ‘Music For Cowards’

I’m not sure. There was a cool DIY scene years ago but like most things. People with money priced everyone out.

You’ve released two albums prior to your new record ‘Always Something’, what did you learn from recording them to bring into the sessions for this one?

Yeah, the first two records were hard to make. The first one we did ourselves and the second one we had someone else engineer. I think we’ve learned how to read people. Feeling out if they’re serious about making records and not just bull shitting for lack of better words. All in all, we’ve learned to follow our instincts when it comes to working with people.

I love the guitar, drums and bass sound you have achieved with your album. It sounds so live and vibrant like a band playing in your front room. How did you capture that sound especially amidst lockdown?

We went to our friend Sasha Stroud’s studio Artifact Audio. It’s a couple of blocks away from where we live in Ridgewood. We all got together in the live room and tracked it pretty quickly. We took three days to track the entire record including overdubs. I think recording with Sasha and her technique really made us feel comfortable amongst what was happening too. She was engineering and tracking in the same room while we were playing.  We also didn’t play to a click and it’s exactly that three people playing music in a room.

I read the album was recorded in lockdown last year, was there a sense of clinging onto some hope and joy during a dark time when you were recording this record? Many of the lyrics appear to be to do with expelling repressed feelings or frustrations?

It was a really weird time to record an album. I think we needed something to work on and look forward to. It’s funny; people have been saying it’s a sunny record but our reality didn’t feel that way.

You brought drummer Ian Rose as a full-time member for this record, what perspective and element did he bring?

He’s great at arranging and understands the art of suiting the song instead of trying to put a stamp on the song or overplaying.

I love ‘Distant Lullaby’. It’s fantastic and so catchy, you say it’s about letting things go, do you think music can be a good source of therapy? Getting it off your chest? How did you come up with the melody?

It was written quickly. It’s one of those rare songs that took maybe an hour or so. I was playing around with the main chords. Rose heard me and started humming the melody and we filled in the gaps with lyrics. I demo-ed it that night. I think music is therapeutic especially if one practices active listening. Music can also make you want to see a therapist.

There’s a brilliant balance between melody and noise and vocals and guitars on the album, was that something you thought about?

Totally. We tried to make this record well balanced. It seems music has less of a melody these days, at least the stuff people are excited about. We wanted to be an alternative to that. Our second record Happy was more aggressive and drum-focused. We tried to make the guitar and lyrical elements pop a bit more on this new album.

Did you have any touchpoint records of influence when you were recording?

Not really. I don’t think we had many references in the pre-production of the sonics or aesthetics of the record. I naturally lift bits from things I’ve heard subconsciously. The fun is hiding those nuances and parts.

‘Back to Nowhere’ has an ace riff that reminds me of the Cult’s Don’t Fear the Reaper a bit, yet the lyrics seem more personal what is it about?

It’s the only song on the album where I wrote the lyrics and melody. I was considering signing it but I have less fun singing these days and Rose nailed the performance so well. The riff has its roots in a couple of different areas; it was something I had in my pocket. Once the melody and lyrical element were developed it was easy to float the riff around those points. The lyrics address free will and self-loathing.

This band in Nashville we played with a few years ago at a DIY venue. I can’t remember their name but they sounded like a more rocking version of Tears for Fears more guitar-based than synth-based. The bass player had a Steinberg headless bass. I remember talking to Ryan (our old drummer) and being like “they smoked us.”

Are you playing any shows/festivals this or are you still waiting to see?

Our Europe tour is still being booked for 2022. If any festival or show bookers want to see us we’ll definitely play. I think we’ll be doing a live gig in NYC in late June or July this year. To actually have a record-release show would be awesome!