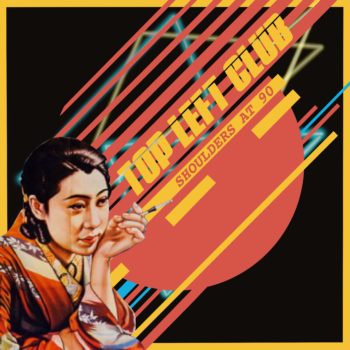 You know what’s great? Big dumb rock. It’s just such a great soundtrack to good weather and puts all the doom and gloom in the world out of your mind for a short period of time. Of course, there is a lot of big dumb rock that is, well, dumb, but Top Left Club have managed to create an album full of crunching guitars, crashing drums and insightful lyrics. This brand of music has as much to do with the Camus as it does with The Ramones.

‘Frown’ opens with the rhythm section just on it and locked in the groove. The drums are getting slammed while the guitars get faster and faster. Then the verse-chorus-verse pattern kicks in before we’re back in the groove. Its incendiary. The standout track is ‘Piss’. As the title suggests this is a track about, well, piss. It’s a celebration about going out and getting lashed up and waking up to piss all over the shop. It’s as unapologetic as you were the night before, but in the cold light of day isn’t as cheery. Here, Top Left Club aren’t passing judgement, but they aren’t apologising either. Instead, we have an honest, and graphic, story about pissing on the floor the night before. The music buffets about at breakneck speed. It’s fast and frenetic, but also incredibly catchy. And this is what Top Left Club are all about. Discussing topics that aren’t really taboo, but also not really spoken about. We’ve all had a moment like this while being out, but I’ve never heard it spoken about with such reverence.

In all fairness there is nothing dumb about these big rock songs. There is just something fun about Shoulders at 90. Maybe its because I’m picturing the band in the finest 90s shell suits, or in Canadian tuxedos, but everything about the album is just a joy. Yes, the music is very 4/4 balls to the wall rock, but what’s wrong with that? Especially when it works this well. Rumour has it that album two is done and album three is being written as you read this. Top Left Club aren’t done yet and I take comfort in that. You should too.