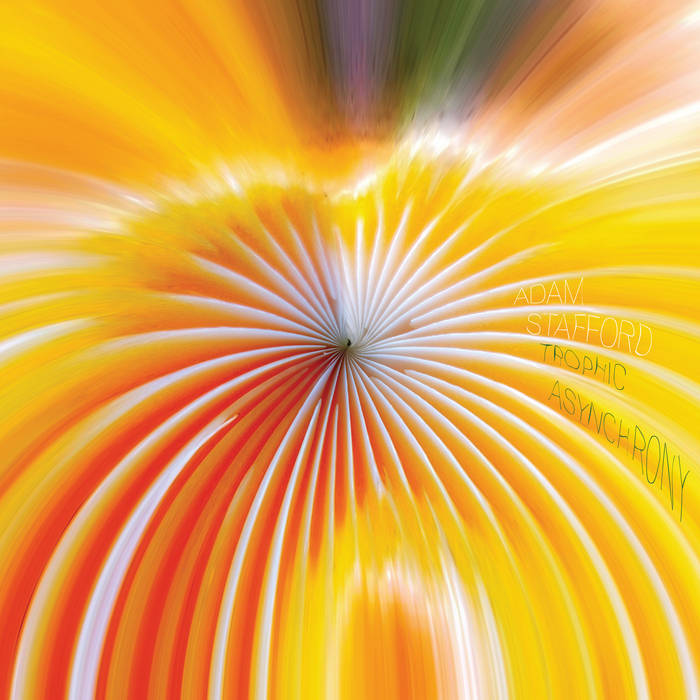 In 2018 Adam Stafford released an album called Fire Behind the Curtain. Over 80-minutes Stafford delivered the kind of album artists dream of. It dealt with Stafford’s struggles with mental health issues. However, it was a completely instrumental affair. Well, ok, maybe not entirely instrumental. Stafford’s voice was featured but it was used more as an instrument than as a way of telling stories. It was his most personal, and most ambitious, album to date. A few months after this, Stafford announced his retirement from music. This was devastating. Stafford is a singular artist. I use this word in its true sense. As well as releasing a slew of incredible albums, Stafford is a photographer and an award winning filmmaker. The ramifications of this statement hit me hard, as it did anyone, who had ever seen Stafford live or enjoyed his albums.

This should have been the end of the story. Like all the best stories, it isn’t. In early 2019 Stafford self-released a cassette called The Acid Bothy, an album unlike anything Stafford had released to date. It consisted of 10 synth-based songs. In hindsight songs isn’t the right word. The Acid Bothy was more a collection of sketches or demos. The story goes Stafford got a new synth. Didn’t know how it worked and recorded his initial efforts with it. Despite their lo-fi charm, they were effectively the sound of a man falling back in love with music. And there Stafford has stayed since. 2020 saw the release of Diamonds of a Horse Famine. This was back to more familiar singer songwriter territory. It wasn’t his strongest album but wasn’t his worst and is well worth your time if you are unfamiliar with it, as it shows someone finding their confidence again.

So where are we now? Stafford has released Trophic Asynchrony. His sixth album in six years. From a man who had given up, he is becoming something prolific. Trophic Asynchrony is a mixture of Fire Behind the Curtain and The Acid Bothy. Predominately instrumental, the album sees Stafford weaving sounds together to create complex tapestries. Stafford has hinted that it has been three years in the making. And it shows. Nothing is to chance. Like Hitchcock, Brian Wilson and Hideo Kojim everything has been planned out and executed with an attention to detail that is both impressive and scary.

The album opens with ‘Carnivore of Lawns’. This sounds, and feels, like a tribute to composer Philip Glass. The notes cascade quickly down, only to be repeated again, and again, and again. Huge piano chords appear while a second, or is that third or fourth, set of melodies begin their cycle making everything feel like elaborate perpetual motion desk toy. Once the first melodies have been set in motion everything that follows is powered by it and its movement is also powering something else. That’s how perpetual motion works right? Anyway it’s a fantastic way to set up the album. It tells us that Stafford has learnt a great deal in a short period of time and is putting it all on the table.

‘Ruptured Telecine’ is the closet thing to Stafford of old. His vocals feature prominently but are manipulated to the point of incomprehension. Also his guitar work is sublime. Anyone who has ever seen him live will attest that the man can shred when he wants to. Here we get a calmer, subtler, version of this. Its great to hear again and hints to his past while looking to the future. ‘Driver of an Endless Latin Hearse’ is mostly piano based and features wonderful melodies. The song starts off simply but through the inclusion of what sounds like a xylophone and a swelling synth underneath the song really grows to something all consuming. The rest of the world fades from vision. You feel like a chicken wearing blinkers. You can only focus on what is in front of you. When it ends, the rest of the world comes rushing back. You are aware of everything around you with a new heightened detail. ‘Threnody for February Swallows’ is about swallows returning in winter due to climate change.

The album is about our relationship with nature and how that relationship sometimes isn’t always for the best. At times, the album feels scared, worried but strangely hopeful. Due to climate change the seasons are shifting. This is affecting nature in a way we don’t fully understand yet. Throughout Trophic Asynchrony, Stafford shows his ability to create complex melody after complex melody, whilst putting us through an emotional blender. This really benefits from listening to it on headphones. The subtle changes of tone or when Stafford just goes for it, like on the album closer ‘Thrapples Clag’, help give you an idea of how intricate the album really is. Saying that, it’s also a load of fun to play loud on a stereo. You decide. Why not try both?

What Trophic Asynchrony really shows is that Stafford is back to his best. He has something to say, but isn’t saying it in a conventional way. He is crafting filigree melodies. These are underpinned by cavernous synths. Stafford then uses lighter tones to add shading and detail and to create something awe inspiring. (While this gets said a lot, it doesn’t make it any less true) Trophic Asynchrony is Stafford’s strongest and most enjoyable album to date. He has taken huge risks that really pay off. Where he goes next is unsure, but ultimately unimportant. Over the past six years Stafford has shown he can turn his hand to whatever his mind sets itself to. So, wherever he goes next, we’ll be with him. In awe and admiration.

Trophic Asynchrony is out now on Song, By Toad.