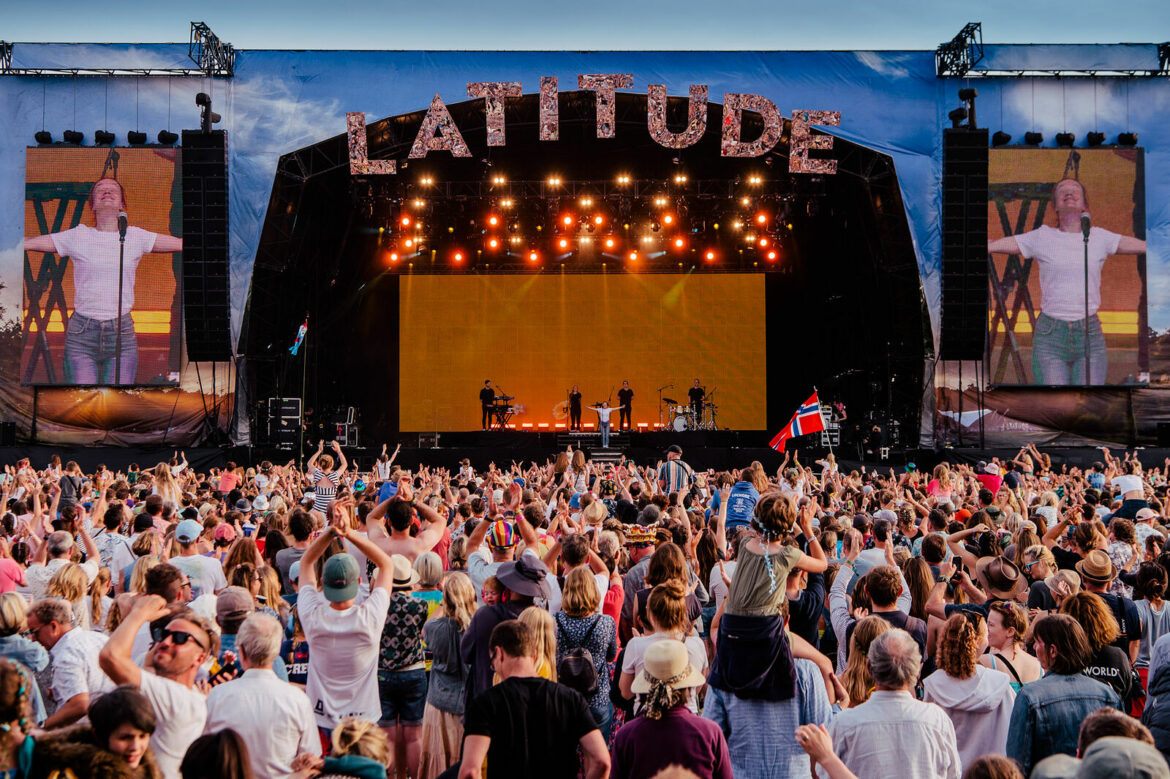 Welcome back old friend. Yes it’s summer in the UK so the obligatory heatwave followed by thunderstorms is here, and just in time for the first major festival in two years: Latitude. With our new friend COVID having wiped out the entire 2020 festival season, 2021 hasn’t fared much better, but with Latitude head honcho Melvin Benn having taken part in some of the UK government’s “pilot” events over the last few months Latitude has been given that tag and is bringing the first real big return of live music since early 2020. Still, we’re not here to talk politics or infectious disease, we’re here FOR THE MUSIC. So onwards with our preview of Latitude’s 2021 line-up, and all British it should be noted.

In amongst the comedy, spoken word, theatre, dance and food there’s an excellent music line-up, starting with Gabby Rivers at The Alcove (12:30) and Lucy Blue at the Sunrise Arena (14:15), with both showcasing their own brand of indie-pop. Bringing her many bags of potential to the Obelisk Arena (15:40) is Maisie Peters and her upbeat pop, with tunes like ‘Psycho’ perfect for a sunny afternoon. The throwback indie-pop of Beabadoobee follows on the Obelisk Arena (17:05) and will thrill those of us who cannot wait for Wolf Alice to headline. The wonderous harmonies of The Staves are gracing the BBC Sounds Stage (18:55) before a super quick dash over to the Sunrise Arena (19:15) to catch Fenne Lily‘s brooding bedroom born lo-fi indie rock, which will ease you from afternoon into evening. After grabbing an evening snack Mabel will be worth a watch on the Obelisk Arena (20:10), even if only for one of the genuine bangers of the weekend in ‘Call Me Up‘. If mainstream pop isn’t your thing then the atmospheric guitar rock of Goat Girl (Sunrise Arena, 20:30) or a newly reconfigured Swim Deep (The Ballroom, 20:45) delivering an update on their baggy indie rock. Then about an hour after that there’s the mother of all festival clashes. What’re you going to choose, the cooler than fuck headliners Wolf Alice (Obelisk Arena, 21:50) playing tunes from one of the albums of 2021 (that’s Blue Weekend if you’re not familiar), or the party starters Hot Chip (BBC Sounds Stage, 22:00) who will be getting feet and bodies shaking off the dust of the last 18 months, or the very highly rated Dry Cleaning (Sunrise Arena, 21:45) and their terrific angular guitar-driven indie.

If none of that twiddles your fancy then the Comedy Arena hosts the likes of Maisie Adams (15:20), Glenn Moore (16:30), and headliners Simon Amstell (17:00). Or there’s a live version of Adam Buxton’s Bug over at The Ballroom (16:35). Failing any of that, just take a wander and soak up the feeling of being free with 29,999 other people.

It’s an earlier start on Saturday with things kicking off around 10am. First recommendation on the music front is the ever awesome 90s comeback kids Supergrass (Obelisk Arena, 12:30) who will play exactly what you expect. If you’re not up for a bit of 90s indie then head to The Alcove to experience an altogether more modern take on pop from the excellent newcomer Charlotte Jane (12:45). The afternoon has a properly good set of comedians so we recommend getting a beer or water and parking yourself in the comedy tent for the likes of Flo & Joan (14:05) Mark Watson (14:35), and comedy headliner Katherine Ryan (17:05). Holly Humberstone (BBC Sounds Stage, 17:15) is a must-see for the weekend, writing songs laced with more experience and feeling than her age might lead you to expect. Stick around the BBC Sounds Stage as the always wonderful Villagers (18:05) will tear your heart out with his angelic voice and lyrics with meaning. Then Rudimental (Obelisk Arena, 19:45) warm-up for the night’s headliners The Chemical Brothers (21:25) while Damon Albarn (19:50) will no doubt chill us all down with a low key set on the Waterfront Stage. There’s an annoying clash with BBC Sounds winner Arlo Parks (BBC Sounds Stage, 20:15) and purveyors of industrial electronic beats Working Men’s Club (Sunrise Arena, 20:30), and if you want to support a really ace indie band then check out Black Honey in the woods at the Sunrise Arena instead of dance megaband The Chems.(21:45).

The final day can be a sad affair, but it definitely won’t be when Bill Bailey (11:30) is opening up the Obelisk Arena, the loveable comedian-turned-dancer-turned-ubiquitous-presence will bring his music-filled comedy to Henham Park. Following that Bill is another, Billie Marten (Obelisk Arena, 12:45) who delivered an outstanding album of indie-pop earlier this year. Alternatively, you can catch indie legend Tim Burgess (13:05) on the BBCS Sounds Stage, Tim is also performing his second job; hosting a live Twitter Listening Party at 16:00. Next Big Thing Griff (14:00) takes to the Obelisk Arena to play her mixtape of music to a likely weary audience. 15:15 brings a clash of the old and new, comeback king Rick Astley will be rick-rolling his way onto the Obelisk Arena mixing his surprisingly well-received new stuff with 80s mega-hits like ‘Never Gonna Give You Up’ and a personal favourite, ‘Cry For Help’. If you fancy new, then the truly fab Emily Burns will be over at The Alcove bringing her lilting thoughtful pop to the air-conditioned tent. You might be surprised that Kaiser Chiefs (17:55)are still going, what with Ricky’s stint on The Voice, but they are, and they’ll be predicting a riot – of fun obviously – at the Obelisk Arena and are good value to keep energy levels high. Another newcomer to recommend is Liz Lawrence (18:15) at The Alcove. Rounding out the weekend for us are the ying and yang of Shame (BBC Sounds Stage, 20:20) and Greentea Peng (Sunrise Arena, 21:45) where you can get your fill of raw rock, then slip into the end of the festival with the smorgasbord of sounds that garnered 4th in the BBC Sounds of 2021.