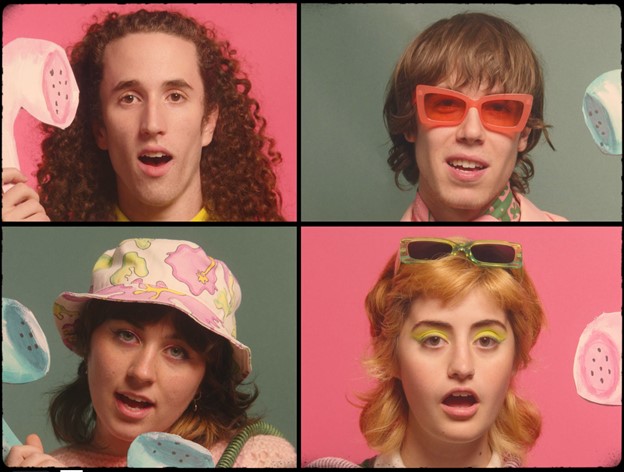 Lunar Vacation have shared their wonderful new single ‘Mold’ in the form of an official music video directed by Rach Rios Rehm; it’s a memorable, tongue in cheek psychedelic, visual with nods to ’60s TV and the fun surreal imagery of Wes Anderson movies. It’s lifted from the Atlanta bands debut album Inside Every Fig Is A Dead Wasp that’s produced by Daniel Gleason of Grouplove and released October 29th on Keeled Scales. The dreamy and lovelorn vocals of Grace Repasky and Maggie Geeslin are paired with hip-swaying percussion, hooky guitars: journeying through a catchy bright chorus (“open the door to let the light in”), an uncertain outro that sounds like opening the door and letting the sun rays in. It sounds like throwing off doubt and superficiality in the most joyous way. A bittersweet gem that intersects the garage pop of Alvvays and catchy psychedelia.

Grace Repasky (songwriter/vocalist/guitarist) says the song is about “…navigating the oddities and strange tides of West Coast culture, specifically L.A., and influencer lifestyle for the first time. We played a festival out there and it felt like I was in an immersive Instagram advertisement. It kind of freaked me out. To make it all more confusing, the song also deals with having feelings for someone wrapped up in that culture and the conflicting feelings of wanting to fit in.”

Maggie Geeslin (songwriter/vocalist/guitarist) says of making the video, “We looked no further than Rachael to direct this one. We’ve been friends for years and working with her on this project was a no-brainer. We told her we wanted something funky and she worked her magic, cooking up a world of absurdity. We had such a good time, in fact, that Grace tattooed the address of the studio where we filmed on their leg at the wrap party.”

Grace Repasky (songwriter/vocalist/guitarist) and Maggie Geeslin (songwriter/vocalist/guitarist) met in the eighth grade and immediately began sharing their own music. By the time they were old enough to drive, Lunar Vacation was born. The pair forged demo after demo, took to as many stages as Atlanta could offer them, and added Matteo DeLurgio (synth) and Connor Dowd (drums) to sonically match their songs’ increasingly vibrant spirit. Shortly after graduating high school, Lunar Vacation self-released two EPs — Swell and Artificial Flavors — which landed them quick critical attention, millions of organic streams, and support runs for Remo Drive, Sidney Gish, and SALES.