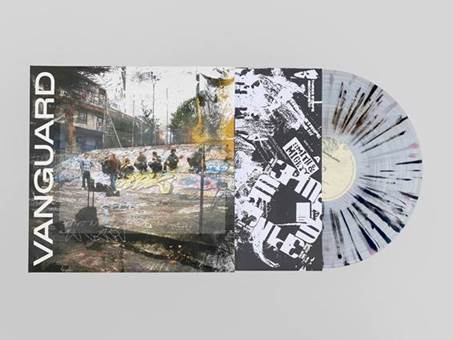 A new Bristol Sound compilation put together by Boca 45 (Scott Hendy). Vanguard The Album brings together some of the most iconic trip hop, hip hop and downtempo tracks hailing from the West Country including an exclusive re-release of Massive Attack’s first ever track Any Love and tracks from Smith & Mighty, Purple Penguin and more

The curated tracks were originally released with bespoke original covers from legendary Bristol street artists, including Banksy and Will Barras, tying its release to Vanguard’s current exhibition Bristol Street Art: The Evolution of a Global Movement at M Shed, Bristol, running until October.

“Compiled by DJ Boca 45 (Scott Hendy), Vanguard brings together the seminal tracks that defined the rebellious era which saw the birth of the Bristol Sound for the first time. Featured tracks include an exclusive re-release of Any Love – the first ever track by Massive Attack released on Massive Attack Records in 1988, Smith & Mighty’s breakout hit Walk On, Purple Penguin’s downtempo classic Memphis and other trip hop classics.

The LP celebrates the globally recognised Bristol Sound whose experimental breakbeat rhythms and influence still dominate the scene today. Along with classic tracks from the ‘90’s into the ‘00’s and beyond, the album uncovers lesser known cuts by some of Bristol’s pioneering musicians such as One Cut and West Country hip hop’s finest Aspects.

The explosion of the Bristol Sound coincided with the boom in UK street art which led to fruitful collaborations between artists and musicians. Finding inspiration in each other’s work, street artists frequently designed rave posters, logos and cover art while DJs provided the beats to accompany street artists’ clandestine painting.

Vanguard The Album pays homage to these relationships with a gatefold LP featuring cover art designed by some of the biggest names in street art such as Inkie, Dicy, Will Barras and Nick Walker.

Hombre notes, “… Bristol is a city that breathes in and breathes out culture. Few can question the ways in which it has had, and continues to have, influence on those living elsewhere. But the large majority of art, and music, was and still is, “made in the West”… Bristol’s street art may well derive from the city’s historic association to cut and paste sampling and hip hop (as informed by West Indian carnival culture system culture) but time makes evident that those settling in the city can assert real influence too, and are enabled to do so by the cultural interplay and open atmosphere that is Bristol, resulting first in ripples, then full scale waves of industrialising and innovative output. From one vanguard to the next.”