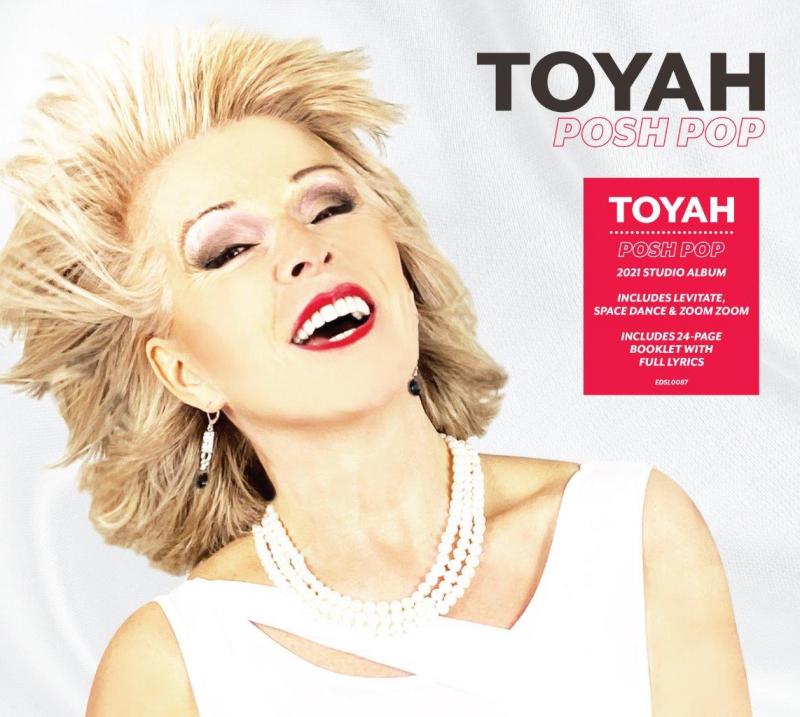 Even in her sixties and not far off her free bus pass, Toyah is still able to turn heads, as evidenced by the striking imagery on the artwork of Posh Pop, and also by the many highly entertaining videos she and her husband, King Crimson‘s Robert Fripp, have been unleashing on us throughout the lockdown period, providing some much-needed light relief along the way.

What I hadn’t expected though, was the diverse range of reference points you can hear on this, her first long-player since 2008. For example, recent single ‘Levitate‘ seems to take its lead from Roisin Murphy‘s recent splendid resurgence, all fidgety dance beats and breathy vocals, whereas the fantastic ‘Barefoot On Mars‘ recalls Bowie in its composition and is a heartfelt paean to her late mother (“Turned my back on all you valued, I held you when you died“) – it’s deep and poignant, and stopped me in my tracks – I hadn’t anticipated that Toyah was going to release one of the strongest songs in her canon this late in her career!

Elsewhere, ‘Zoom Zoom‘ is seventies rock, pop and glam all rolled up and smoked in one pipe, while ‘Monkeys‘ is pleasingly off-kilter in its delightful chorus.

Posh Pop is a far better album than its title might lead you to believe. It deserves a better moniker, to be frank, otherwise, I fear there’s a danger of it ending up in the 20p bargain bucket at Age UK, and that would be a crying shame. After all, the dramatic ‘Kill The Rage‘ is surely a nailed-on future Bond theme, and the rather pretty ‘The Bride Will Return‘ gives some sound advice over dreamy, almost proggy instrumentation – “No matter what you do, you are you, beautiful you. No matter what they say, it’s your day.”

Back in the day, certain music journalists were somewhat dismissive of Toyah’s punk credentials. But they were missing the point – she’s always been a ‘pop’ artist at heart, and that is unashamedly showcased quite perfectly here. Ok, its closing track, ‘Take Me Home‘, is a little too close to the more ‘polished’ pop of 35 years ago for my liking, but ironically is one of the strongest lyrical pieces on the entire record. It’s all quite endearing really.

So yes, in summation, it’s a triumphant return for Toyah – and I, for one, am glad to have her back thundering in the mountains. And yes, I know that was a shit pun. Sorry.

Posh Pop is out now on Demon Records.