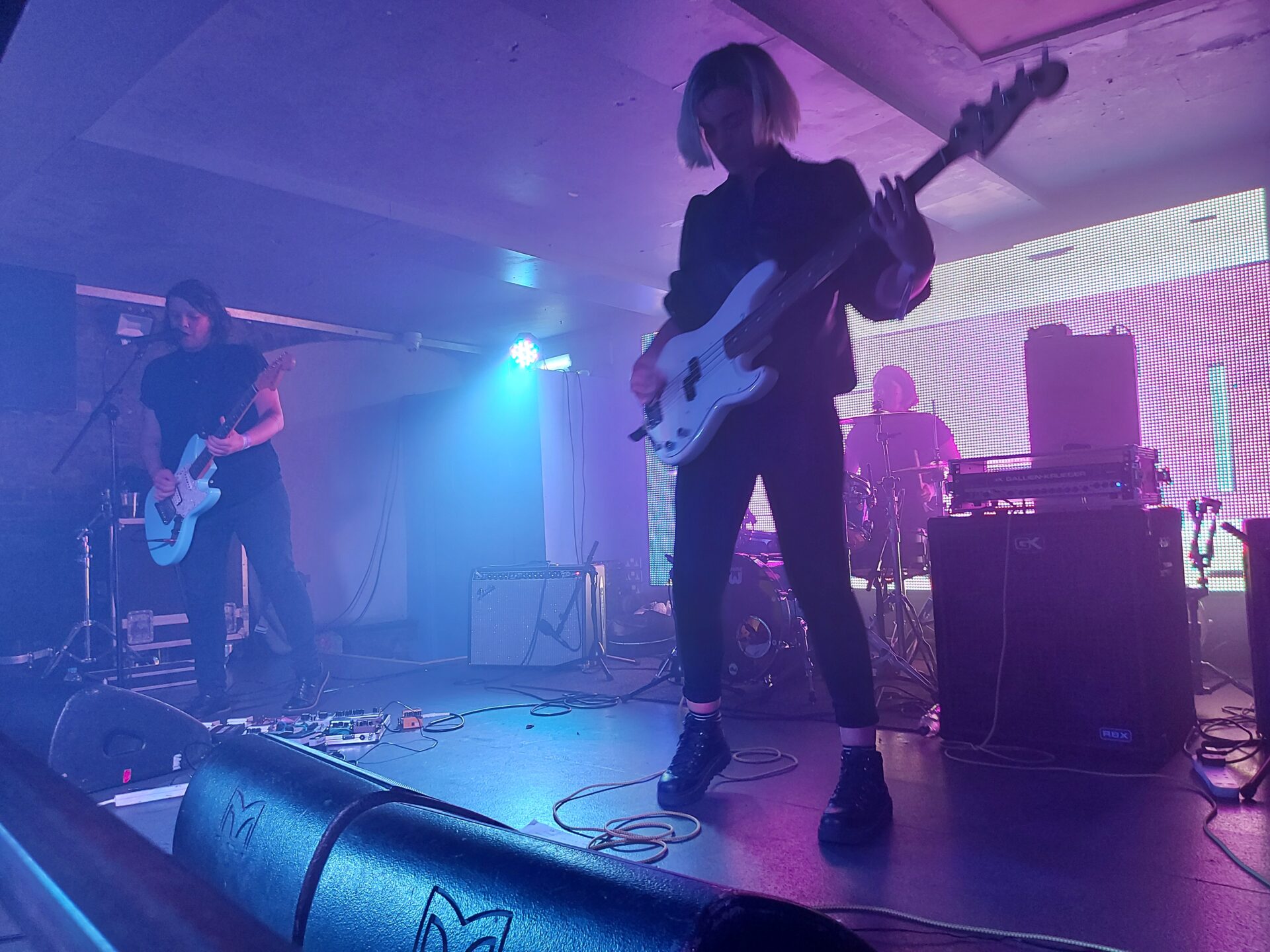 Manchester Psych Fest was going to be a stressful day due to the sheer volume of top-class bands playing various music venues across the city.  Planning was required and tactics had to be thought out in advance.  Thankfully these venues were all within a 10-minute walk of each other.

It did begin with a queue around the block to complete the obligatory Covid-19 documentation check and swap the paper ticket (remember them!) for a wristband.  Note to self, if I come next year, rock up much earlier.  With 10  minutes to spare, I am in Gorilla at the front for The Lounge Society. And breathe…

This band are pure joy.  Signed to Dan Carey’s Speedy Wunderground label, I’m not sure they realise just how good they are.  With their debut EP ‘Silk For The Starving‘ released this year, a remix of ‘Cains Heresy‘ under their belt by none other than A Certain Ratio, plus their energy on stage, I suspect the four-piece from Hebden Bridge will go from strength to strength.  Their 8 song set includes a couple of new songs and closes out with ‘Generation Game’ “what will the US do to save our souls to save our dignity?”.  Breathtaking.

So the day had started in fine style.  Realised tactics had to factor in time to see the bands I was interested in.  Next up was Folly Group in the O2 Ritz Academy basement.  This funky band got the room dancing immediately.  The percussion upfront is a sound to behold and the appreciative whoops from the packed crowd were met by huge smiles from the band.

Another 8 song set and this turned out to be a feature of the day.  Each band played a solid set and with soundchecks and fast turnarounds it was a feat of teamwork.  Deep Tan was next up on this stage and the crowd remained to be treated by a set of sublime stripped back post-punk soundscapes by the trio.

Up to the main stage in O2 Ritz for iconic Irish band Girl Band.  I would have loved to ask the audience how they were aware of Girl Band as the demographic was much younger than anticipated.  They put on a storming set and with little encouragement from lead singer Dara Kiely the moshpit was in full flow.  Their angry chaotic music appears to be perfect for our times.  I had the pleasure of seeing Dara outside the venue afterwards and shook his hand.  I shared with him the influence Girl Band has on the young Irish bands of today and he appeared very appreciative and touched.

A jog round to venue FAC251 and Manchester band Liines.  High on my list of must-sees and they did not disappoint.  First time seeing them live, their new single  ‘Keep On Going‘ has already grabbed attention from the likes of Louder Than War.  The trio are building up a reputation and another full room enjoyed every minute of their set.

Interesting fact:  FAC251 in the original central Manchester offices for FACTORY RECORDS.  It has reopened as a live music venue/nightclub on three floors renovated by Peter Hook and established club operators Tokyo industries.  It seems only fitting that live music lives on in these spaces.

Back to the O2 Ritz main room for Stereolab, and that young demographic hollered and danced their way through a joyous set.  ‘French Disko‘ was a highlight and the crowd lapped up the music by this band whose music releases date back to the early ’90s. In fact, the festival as a whole seemed to be a mixture of youngsters and those of us who grow up with punk and bands who came immediately afterwards.  The term ‘post punk’ does make me chuckle when I hear it used as a contemporary music genre over 40 years later.

Nipped back over the road to Gorilla and did stand in a queue for a while but was delighted it was only due to the venue getting a quick clean before the next band.  The best footwear of the weekend goes to the guitarist of The Mysterines whose red and white sparkly boots were mesmerising.  Lead singer Lia Metcalfe appears to sing effortlessly but the power in her vocals is breathtaking.  ‘I Win Everytime‘ was a standout track of 2020 and with a soon to be released debut album it was brilliant to see they are even better live.

JOHN were upgraded to the O2 Ritz main stage for their set due to issues with the original venue.  Unphased their thunderous music works in any room.  This duo make the most earthshaking music, full of fire and bluster.  They gave it their all, and more and it was a treat for anyone who was in the room.

And so to Gorilla for the final hurrah.  The beer had run out but then who cares!  Liverpool’s Stealing Sheep were in their sumo suits, the lights were flashing, the audience was dancing, the streamers were blasted over the crowd and all was well with the world!  Then it was a last-minute replacement TV Priest to cover for a band withdrawal due to illness.  They grabbed the opportunity and injected one final shot of adrenalin into the early hours of Sunday morning.  Signed to Sub Pop during the pandemic, TV Priest released their debut album Uppers during this toughest of times.  This was never going to be a wind-down at the end of a phenomenal day of music.  It was more a continuation of the celebration of live music.  Live the standout tracks are ‘Decoration‘ and ‘Press Gang‘ with lead singer Charlie Drinkwater prowling the stage, discarding the mike stand from the off.  They won the room and left us reeling, sending us on our way with the excitement of live music ringing in our ears.

The day passed so quickly due to constantly keeping one eye on the time.  It was a day packed full of some of the best live music at the moment.  Obviously, there were many others bands I would love to have seen, but it would have been impossible to see everyone playing.  There was also an opportunity to chat with the bands, some of whom are only just getting back to playing live.  It is a complete win-win.  I shook the hand of the drummer of Folly Group and the guitarist of The Lounge Society, chatted to lead singers of Girl Band and TV Priest.  This was a much more intimate festival due to the size of the venues and the bands playing, but the quality was no lesser for that.  I even managed to nab three setlists, simply because I could lean onto the stage and pick them up!

The return of live music and the shared experience with friends and strangers alike continues.  If all festivals were as friendly, small, intimate and had the quality of bands as the Manchester Psych Fest then we would be blessed indeed.