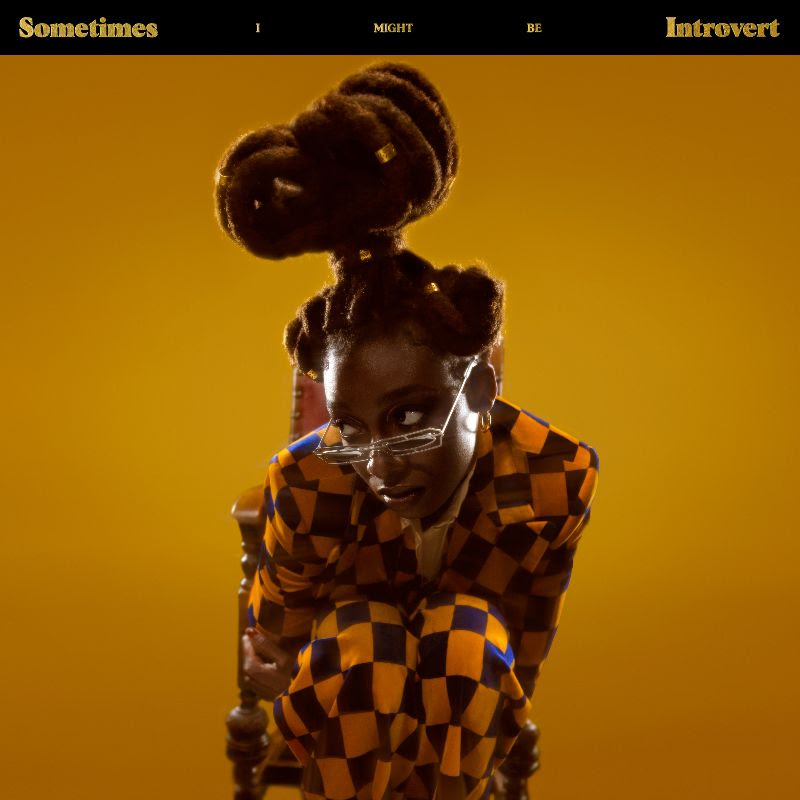 Sometimes I Might Be Introvert is Little Simz‘s best record yet. Simz doesn’t just find a voice, she finds a defining sound that mixes the melting brew of London. She bravely stands in the crosshairs of injustice, prejudice and the march of the right-wing and tears it down and builds herself up to the top of the mountain in the process. This is her moment and she seizes it.

Taking everything up a notch from the more introspective and laid back grooves of Grey Area and her drop records, this time 27-year-old Simbiatu “Simbi” Abisola Abiola Ajikawo aka Little Simz works with production outfit Inflo who have been responsible for bringing the neo-soul sound and placing it in the present, working on awesome records with Michael Kiwanuka and under their own steam with prolific records under the moniker Sault.

Here they collaborate with Simz to elevate her narratives with a warm gleaming palette of golden grooves, the sound of an effortless soul band, over nineteen tracks its stitched together like a concept record, with instrumentals and nimble motivational storytelling from The Crown actress Emma Corrin, it allows Simz the stage to switch effortlessly from old school Hip Hop, African flecked percussion to decorating infectious grooves and melody. It’s a testament to her skill, adaptability and talent that she doesn’t miss a beat regardless of the style approach. So while Sometimes I Might Be Introvert is informed by modern-day Britain, Grime and Hip Hop that speaks to the experiences of being young and black in the UK, it has that in common with the likes of Dave, yet its sound is rooted in an old school of A Tribe called Quest and Erykah Badu, artists who could effortlessly blur sounds and it forges a tapestry as grand as 70s records by Curtis Mayfield and Stevie Wonder. Yes, it’s that good.

Little Simz emerges from the smoke, with opener the heart-stoppingly prescient ‘Introvert‘ a magnificent clarion call delivered at the crucible of inequality and injustice, the bitter dichotomy of tensions at the heart of society. A visceral essay about lives lived in the cross-hairs of society, fuelled by fear, exhaustion, frustration, but also a kind of white-hot political awakening.

Framed in the grandeur of the strings, brass and military drums the intro has an operatic and cinematic splendour. It is pierced by Simz’s fearsome and magnetic polemic where she finds the strength to externalise her internal struggle to speak truth to power. (“All we see is broken homes here and poverty/ Corrupt government officials, lies and atrocities/How they talking on what’s threatening the economy/ Knocking down communities to re-up on properties/I’m directly effected, it does more than just bother me.”) Simz spits with her chest, her lyrics sketch out the corruption of politicians, gentrification, institutionalised racism that inspired the Black Lives matter movement, religious hypocrisy, gang warfare fueled by poverty, and the personal impacts it has on Simz and the communities of Britain.

At its heart is Simz holding her head high as a resistance in the eye of the storm, strings and beats vibe that is interspersed with soulful almost garage-like refrains, meditating on the internal and external struggle of being a black British woman in 2021. ‘Introvert’ is a biblical and searing statement, personal, political and bold it strikes to the heart of the broken state of people and the nation and a reassertion of survival through struggle.

The well-worn groove of ‘Woman’ with its celebration of strong black women from Africa and at home, is fun. A fresh and soulful love letter to women around the world, this familiar illuminating groove features Little Simz’s ‘Selfish‘ collaborator Cleo Sol on gorgeously airy guest vocals. Of the song, Simz says: “I love it when I see women doing their thing and looking flawless; I’m here for that! It’s empowering, it’s inspiring; I wanted to say thank you and I wanted to celebrate them.”

As well as bearing witness to injustice Simz also taps into her own struggle and makes it universal; a brush with death on ‘Little Q Pt2‘ offers up sharp realisations, it showcases her innate ability to talk with relatable candour about her own biography and link it to wider society, dipped in the sunshine of Hammond organs, skipping production and chirruping 70s soul refrains, this majestic life-affirming observation of the cycle of poverty, coming from a broken home, a violent attack and how she overcomes, is one of the standouts.

Elsewhere the soulful duality of the poignant ‘I Love You, I Hate You’, sees Little Simz laying herself bare like never before, fiercely riffing on the trauma caused by her absent father.

The string and horn-laden track covered such difficult material that Simz at first refused to write it. “My producer Inflo asked me, what do you love and what do you hate? I knew the answer immediately, but I was adamant I didn’t want to talk about it”. The spectre she didn’t want to talk about? Her absent father. “Is you a sperm donor or a Dad to me?” she asks, as a funky guitar riff gives way to vibrant strings and a moving choral climax. “My ego won’t fully allow me to say that I miss you” she confesses. “A woman who hasn’t confronted all her Daddy issues.” As raw as her anger – and sorrow – are, somehow Simz finds some sense of resolution. In the last verse she concludes, “I’m not forgiving for you, man, I’m forgiving for me.”

With ‘Speed‘ she infects a dirty groove with a strident defence of her own talents, a rap battle stripped to an almost post-punk beat that’s redolent of Young Fathers, the sinuous guitars, its a tribute to the work she has put in to be this good. The samba rhythms, and funky bass lines of ‘Point and Kill‘ are scattered with Obongjayar‘s dexterous vocals merging African instrumentation with the expectation of Nigerian families and the constant threat of gang culture. On the tumbling and cinematic ‘Standing Ovation’ she delivers a stridently unstoppable ode to her inner strength and the movement over string stings, throwing off the modern need for validation, it sounds not unlike early Jay Z .

Penultimate track is the reflective ‘How Did I Get Here’ whose gospel refrains are decorated by sensitive pianos. While Simz ponders on the struggle of prejudice, growth, never letting anyone snuff out your dreams and ultimate redemption  – “All I had was my brain and hunger/had to use them as tools/the amount of people that told me no, I used them as fuel” – she elegantly balances glowing soul motifs with an unstoppable autobiographical flow. It has some shades of Stormzy‘s ‘Blinded By Your Grace’. Life-affirming.

Sometimes I Might Be Introvert isn’t just one of the best British records you will hear this year. It’s one of the best records you will hear this year, full stop. Wonderfully produced it skirts the lines of soul, hip hop and the African continent, maybe there are a couple of tracks that don’t land quite as hard, but it’s so warmly drawn that this varied transcendent bricolage of sound could have been produced at any point over the last thirty years.

After honing her craft over a decade, Simz steps out of her introversion and speaks to everything with a relatable big heart on the sleeve and a visceral intent that speaks to universal issues of trauma, inequality and growth of an artist and the experiences of a black woman. She’s a teacher standing firm in the tumult of 2021, documenting the tensions of dichotomies, introversion and the fear of speaking out and possessing the bravery it takes to call it out, the extremes of social media, Black lives matter and speaks to frustration, injustice and the struggle to be heard. Little Simz audaciously puts her own heart on the line and in the process she ascends to her place as one of the best artists in the country. This is the sound of 2021.