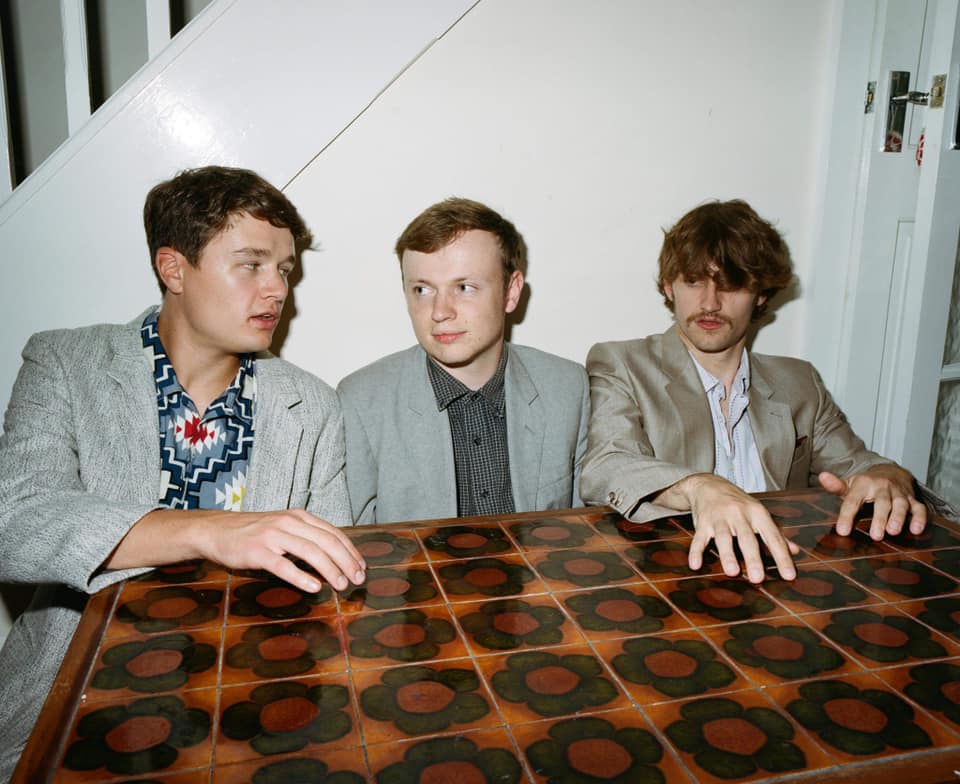 It feels odd to say the least, learning Papur Wal means ‘wallpaper’ in English. Such a pedestrian and nothing sort of word, incidental really. One loitering in the background and shying away from centre stage, and yet with Papur Wal the band, we find the exact opposite.  They’re a strong and impressive musical and cultural force to be reckoned with, one strengthened and empowered by speaking and performing in their native Welsh tongue. The three piece, Ianto (guitar/vocal), Gwion (vocals / bass) and Guto (vocals / drums), broke into a wider consciousness outside Wales through live shows opening for Adwaith, and they even managed to sneak in a gig in Liverpool for Independent Venue Week 2020 before plague year hit, plus those slacker singles such as  ‘Lle yn y byd mae hyn?’, ‘O’n Ni’n Ffrindia’ and ‘When He’s Gone’ before all that.  Debut album Amser Mynd Adra out this month sees the band go a step further in their journey, following musical ambitions coming more naturally to them.

‘I think it’s true, at the time there weren’t many good bands about through the medium of Welsh,’ Ianto continues.  ‘We always thought we should do it, because we thought we were better, or we wanted to be better. We’d go out to gigs and listen to music, we’d share whatever we were listening to. It was just one of those things where music kind of naturally followed the friendships.’

We talk a little about Papur Wal so far, how Amser Mynd Adra was made with long time producer Kris Jenkins (Super Furry Animals, Cate Le Bon, H Hawkline). It features guests Ianto’s sister on horns,  Gareth Bonello on cello, Bandicoot’s Rhys Underdown on sax, and sees them refine and polish their sound by embracing instinctive musical passions. Going with their hearts, if you like. 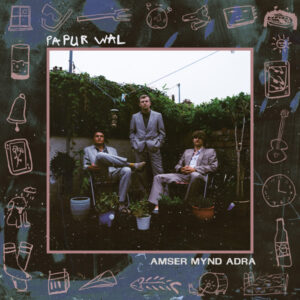 ‘Slacker power pop’ may sound a contradiction in terms but in reality it describes the record surprisingly well. The rock element still present but there’s your classic pop honest sweetness of true melody we hear as with early Beatles, and Big Star.  Such wonderful harmonies from the three Papu Wal men as well. At the start of 2020 Papur Wal released singles ‘Meddwl am Hi‘ and ‘Piper Malibu’, indicating that dedication to the three minute pop song format; yet the album itself isn’t an abrasive shift from earlier singles per se. But with Amser Mynd Adra, in Ianto’s own words, they ‘kind of went back to basics’. He recalls initial recordings the band made at the beginning, how the song Gwion wrote was melodic and offbeat, his own contribution more sombre and melancholic. ‘And so I suppose those two ingredients have always existed, to some extent. Something like slacker pop will maybe have both ingredients.’ With the album they wanted to write pop songs, ultimately. Those early investigations in the history of rock, going down related rabbit holes in their late teens led them away from that. ‘I think that was kind of the reason behind why we started off with such a harsh and raw sound. And then recently, we’ve just gone “wait a second. We actually really, probably prefer, you know, listening to the Beatles, James Taylor. We prefer these things. We like singing, we like melody, harmonies. It was let’s do this because we’re way better at this.”’

During 2020 the trio were living together and made most of the spare time the period offered, listening to lots and lots of music and writing songs as a unit for the first time. A very different approach to one coming in with a song and everyone learning individual parts.

‘We were every day coming home and have something different on the agenda. We’d listen to a new album, learn a Beatles song, the next week it’d be Gorky’s. It was a really productive time for us than just writing, it was cementing those influences. We had a bunch of songs we had before that, and I don’t think it would have been half as good or half as representative of what we’re showcasing now.’

‘Llyn Llawenydd (Lake Happiness)’ from the album was the first time they had each sung a verse on the same song, and Ianto’s initial attempt at working on a song with Gwion. Their videos always se them larking about like in Fab Four movies, and Ianto reveals they followed Lennon and McCartney’s songwriting processes on the record. ‘Going in with nothing then come out with something complete,’ says Ianto.  ‘Gwion writes Beatlesy chord progressions anyway, they’re quite thought out. That was something I came to understand a bit more. I do it until it sounds right but Gwion has been obsessed with the Beatles since he was kid and has this chord book, it’s how he learnt to play guitar. It felt a lot more fluid and we carried on with a lot of the songs doing that.’

On the album, the notion of leaving one’s carefree early twenties behind is explored, that point where adult life begins. The press release describes one’s mid-20s as ‘bleak’, raising a smile at this end.  ‘For older people it must be, these have got no idea what’s coming,’ Ianto laughs, and suggests the events of 2020 may have have underpinned the feelings they were having. ‘We came out of it disenchanted. Went into it 23, and come out of it 25. We were “oh god, we’ve lost our best years!”’

Joking aside, time stolen from us is a shared experience through generations over the past 18 months, but album’s title in English – time to go home or home time – reveals a more pertinent specific pressure.
‘It’s also referring to, as a Welsh speaker, everyone moving to Cardiff, that brain drain when people leave their communities to go to have jobs in the cities. There’s a significant effect on where we’re from, in rural north west Wales. You always have this in your head, every time I go home my grandma, she’s asking “when are you moving home, you’ve moved in with your girlfriend” and it’s, “he’s never coming home”. We always have that internal monologue, “when am I going back?” because we have that sense of duty as Welsh speakers in a rural place where maybe there’s more need for us. That’s like, “is it time to go home?”, especially with the second home crisis and tourism effects on North Wales it’s especially relevant now.’

‘Andrea a Fi (Andrea and I)’ has a curious provenance, one or more mischievous Italians scribbling poems in their own native tongue into Ianto’s lost notebook in a bar one night, but the words searching for the meaning of life near enough. So Ianto decided to have fun of his own. A colleague translated the poems from Italian which formed, in part anyway, a new song. ‘I’m sure if an Italian person heard it, it wouldn’t make much sense to them. I don’t think it really matters generally speaking. We’re doing an album in Welsh, we hope the people who can’t understand it will listen. There are bigger barriers than it being grammatically imperfect in Italian!’

The record isn’t all deep ponderings, of course. ‘Meddwl am Hi (Thinking About Her)’ occurs as an angry love song. He agrees and further to that, it bridges the gap, says Ianto, between old and new Papur Wal.
‘An angry love song is quite befitting of that genre, slacker pop. We wrote it as a reaction to the things we’d been releasing previously which were a bit more long winded, maybe a bit self-indulgent, not writing with an audience in mind. We’re trying to maintain that slacker energy as well. We weren’t sure we were going to put it on the album but it holds its own.’

Latest single ‘Brychni Haul (Freckles)’ showing itself as ‘unapologetically’ early Beatles, and unashamedly hopeful, different again. With such range in Amser Mynd Adra, a wider scope than any of us, even the band themselves maybe ever imagined, one can’t help but foresee that the notion of wallpaper as their a name will be viewed as deeply, hilariously ironic.

Amser Mynd Adra is released on Libertino on 8 October.