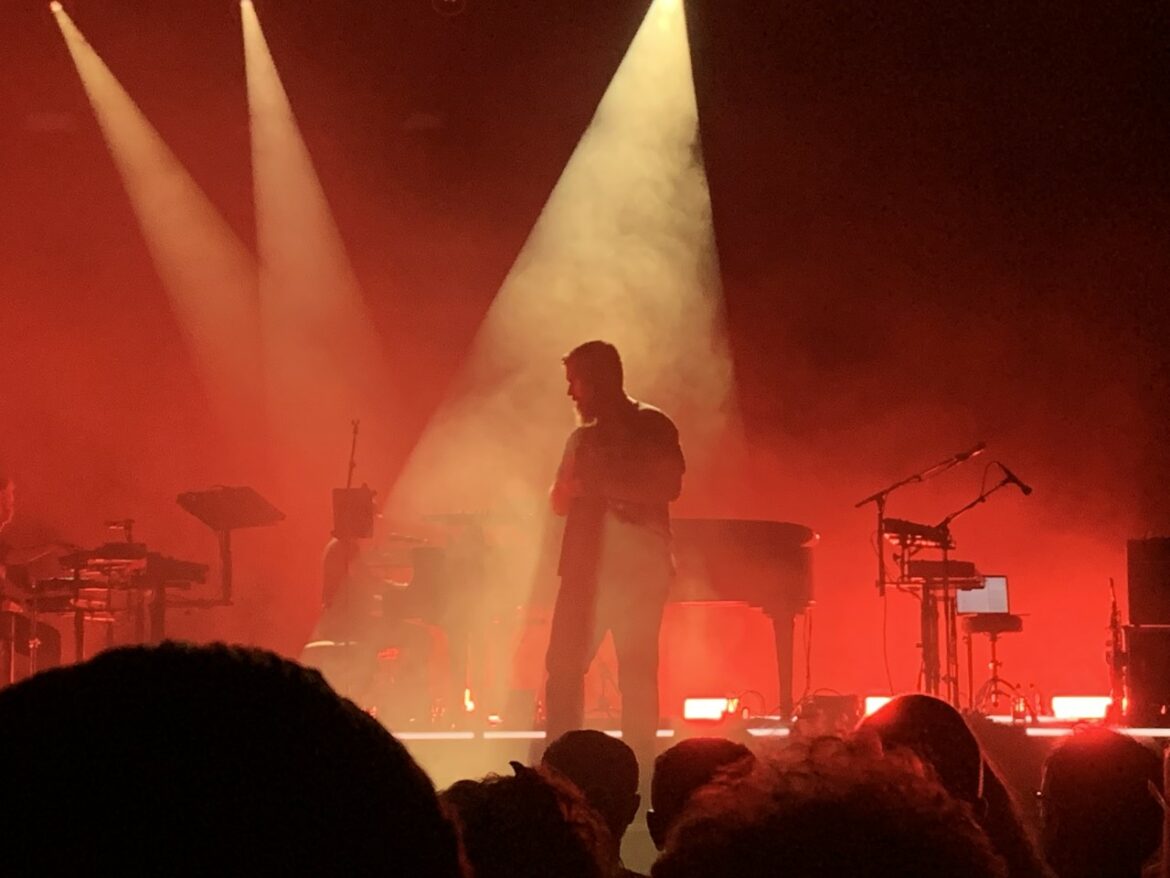 It’s the last night of John Grant’s tour and he’s explaining to the audience at The New Theatre in Cardiff that he has a lot of Welsh action in his life at the moment. His last LP, Boy From Michigan, was produced by Cate Le Bon and he’s got connections with the city that go back years – indeed, the video for ‘Chicken Bones’ was partly shot at Bessemer Road Market and you can’t pry much further into the entrails of the naked city than that.

He’s been playing songs from the new album. They draw on memory, on recollections of the pains and occasional glories of adolescence, memories rooted in a particular place at a particular time. The intro to ‘Boy From Michigan’, bathed in purple light and dry ice, sounds ceremoniously like the five tones from Close Encounters, and the elements of electronica that are always present in Grant’s music are centre stage. For all that he’s chronicling a mythic America, it’s much more Skinny Puppy and Vince Clarke than Springsteen or Dylan, and it works. These new songs are serious and unsentimental, obviously drawn from a very idiosyncratic psychic landscape. His voice tonight is beautiful.

The concert was originally billed as an intimate performance with Grant and his long-time pianist, Chris Pemberton. For obvious reasons, that show didn’t go ahead last May, and in the intervening time, he found himself with a new record to promote. To that end, he and Pemberton are joined by Cormac Curran on keys, guitars and saxophone.

From a grand piano, he sings a song about, ‘the pink art deco glow / of The Cruise Room’, a tale of defiance and valediction set in a Denver hotel bar, of love that must last forever, but maybe won’t, and it seems a good point to note that I can imagine no better venue to see this stuff. The New Theatre is a grand old Victorian playhouse, all crumbling, ancient plaster and shabby elegance. We must look like the audience of the Muppet Show from up on stage. It’s just about small enough to feel informal and the lighting emphasises the tonight-in-cabaret atmosphere. More gigs here please.

Then we’re onto the silly stuff. ‘Black Belt’ and ‘Rhetorical Figure’ bang pretty hard, allowing Grant to bust out a few moves. There’s a real sense of conviction to his performance of material like this, very precisely mincing about or dropping theatrically to his knees against the big, crashing synth chords of ‘Rhetorical Figure’, and hitting the song’s tongue-twisting lyrics and rapid-fire shifts in register just-so. There’s something very pleasingly Gilbert and Sullivan about it.

There’s a long essay to be written about how Grant uses his body in performance. He’s a bearishly masculine-looking guy – all beard and piercing eyes, you could imagine him easily taking out a Chinook salmon with one swipe of his mighty forepaw – and these touches of camp convey a lot about the characters and stories he’s relating.

The mock-heroic vein continues with ‘Grey Tickles, Black Pressure’, rearranged to great effect around a solo piano. It’s revelatory – one of the first of the old favourites to appear tonight in a new form. Stripped back to the melody and the words, the song builds towards its absurd chorus in way that feels reinvigorated. Later in the show, ‘Queen of Denmark’ goes the other way. The familiar piano has vanished, the song’s backbone now a laconic, rhythmic squelching that’s barely recognisable. The casual cruelty of a doomed relationship glitters splendidly (‘I hope you know that all I want from you is sex / To be with someone that looks smashing in athletic wear’) until Curran’s guitar comes in and takes the song into a world of such misery and despairing rage that I was quite horrified beyond words. And I’ve seen Godflesh in their prime.

The older material feel rested and restored. ‘Marz’ is still one of the most beautiful songs he has, and it’s given a sparkling, synth-pop overhaul. Even ‘Sensitive New Age Guy’, a track I never much noticed before, takes on a harder, more tragic dimension tonight. It’s as if tonight we’ve suddenly found the guts to see, for the first time, deep into its heroine’s painted eyes.

‘Glacier’ is billed as a moment of comfort in the difficult times we find ourselves living through, a crumb of consolation against all the losses of the last year. ‘Glacier’ has clearly shaken itself free of its original context – a diatribe against the so-called religious right – and has taken on the sins of all our enemies. That chorus, its epic rise into the mountains and dying fall into understatement, touches something in all of us tonight, tops us up with those ‘precious minerals and other stuff’. Grant’s voice again: he really does have the most beautiful voice. It seems to soar into the words, through and beyond them, a life-altering surge of grief and dignity. ‘This pain, it is a glacier’ and you cannot doubt him. Chris Pemberton, stick-thin and cloth-capped at the piano, plays it out in spectacular fashion, transmitting a sinuous climax of runs and scales, crashing into waves of what sound like pure emotion.

For the encore, the trio is joined on harmonies and guitar by this tour’s golden-voiced support act, Teddy Thompson. They play impromptu versions of ‘TC and Honeybear’ and ‘Sigourney Weaver’. Belatedly, we learn that TC is for a just-married couple in the circle. It’s very sweet that Grant seems to know half the audience tonight. There is applause and rejoicing.

‘Sigourney Weaver’ feels like its just for me though. Obviously it isn’t really. Nonetheless, I confess I do still feel like Sigourney Weaver when she had to fight those aliens, gaffer-taping one flamethrower after another to my grenade launcher. I’m sure John Grant knows this, but he has the good taste not to spoil the moment for these guys who just got hitched.

He plays them ‘Caramel’ also, and for a moment we’re all newlyweds.

Grant closes the show with the inevitable ‘GMF’ and it’s hard to disagree. The new songs sound like classics and the old songs sound new. Always a commanding live presence, tonight John Grant has the assurance of a great artist affirming and revelling in his power.