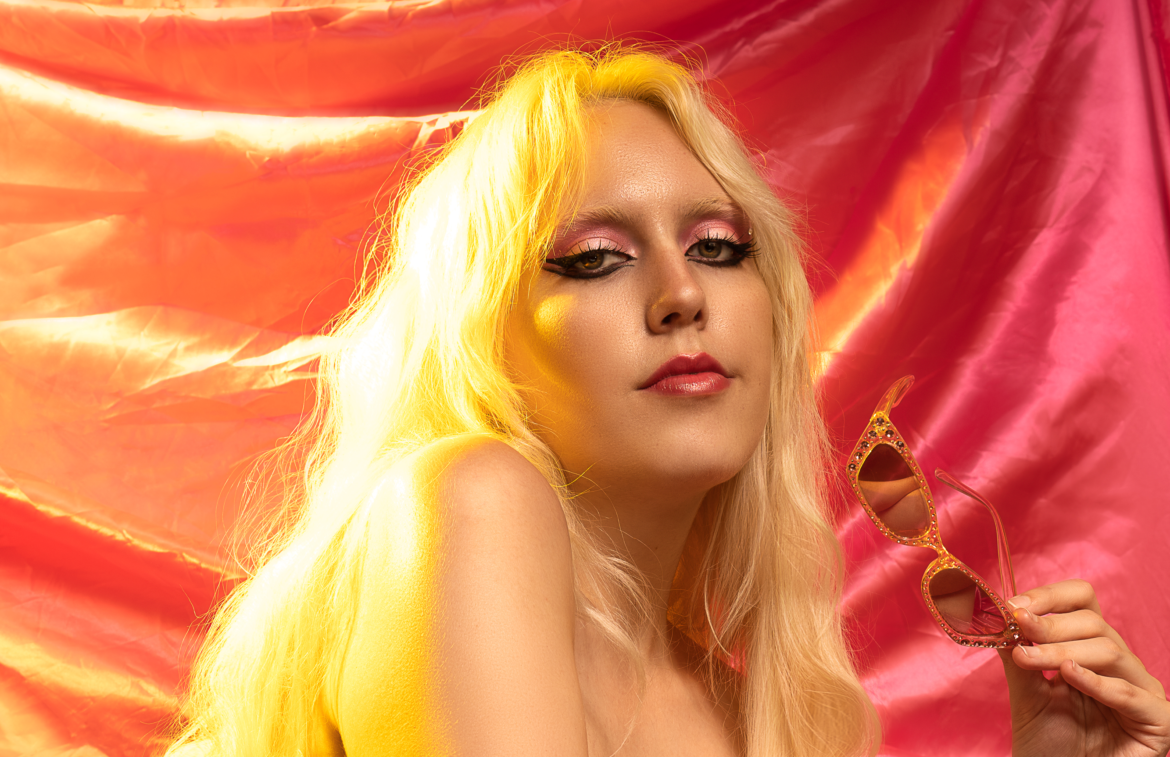 Self-styled ‘dyke-pop-princess’, Foxgluvv has created the perfect score for your late-night party with her signature ‘hungover-pop’ sound. Blending the lyrics and aesthetics of modern left-field pop music with her love of disco and the ’80s, Foxgluvv’s music is packed with dreamy synths, lo-fi beats, and extravagance.

Foxgluvv’s E.P Deep Dive came out last month, it’s a five-track collection of songs narrating their experience of dealing with feelings, anxieties and grief over the last eighteen months. Juxtaposing intensely personal lyricism and wrapping it in a disco-pop blanket, each track explores the different ways in which Foxgluvv has dealt with those feelings.

Reflecting the overwhelming task of addressing your truest emotions, ‘Deep Dive’ as a title, submerges us right at the opening lyric of the EP “deep dive, put myself on auto-drive”, and sets us up for the intimate disco-infused journey that Foxgluvv has crafted, alongside her long-term collaborator Scott Colcombe.

“‘Deep Dive’ is a sonic self-portrait of how it feels for me to connect with my emotions and face my mental health struggles and grief. So many people tend to sugarcoat topics when being vulnerable, so the disco-pop, light-hearted elements throughout are designed to mirror that, but within the lyricism, my most personal experiences of opening up and overcoming are buried.”

“Feeling low and looking high class” she sings on ‘Champagne glass’ the lush suite that tiptoes through bittersweet tear-stained nights out. The first teaser of the EP was the dreamy disco-pop single ‘1:00AM‘ it marked a new shift for Foxgluvv.

Inspired by restless late nights and intrusive thoughts, the song captures her personal struggles in a catchy, ’70s influenced floor-filling pop track with nods to everything from Chic to Dua Lipa, the spoken word asides give it an extra pop and the chorus has an addictive earworm quality. There’s also bittersweet floor filler ‘Lemon!‘, switching between infectious Dua Lipa’s style of pop grooves and Self Esteem‘s introspection, ‘Lemon!’ narrates Foxgluvv’s personal self-reflection, and the realisation that they were slowly becoming bitter. Not wanting her mental health to further deteriorate and get in the way of friendships and relationships, Lemon! was written out of pure frustration for who Foxgluvv was in a downward spiral.

We caught up with the Midlands-born, London-based artist to find out more.

Hey, I’m great thanks! The sun is shining so I’m feeling pretty good.

How did lockdown treat you?

Lockdown was… difficult – like it was for many people! But I’m thankful that I spent most of it living with friends and making music.

I saw you played Pride recently how important is it for you to be loud and proud about your sexuality?

Yes! I played the main stage at Birmingham Pride 2021, which was wild! I have been going to this specific pride event since before I even came out – so to be loud and proud about who I am is super important to me every day, but being up on that stage felt like such a “look at me now” moment to my younger self. It was such a beautiful day!

Five words… hmm, I would describe my music as “Pop, camp, disco, left, and… gay!”

I read that ‘Deep Dive’ was an attempt at catharsis, you wanted to open up and express your anxieties and mental health issues, does letting it go help?

I mean, letting it be out there in the open sure is better than keeping it locked inside! I wrote Deep Dive to talk myself through how I’d been feeling, and to explain to others what I’d been going through – but I didn’t want every track to be sad and slow, so the EP is very upbeat and has the sadder lyrics disguised within a disco-pop blanket.

I love the playful disco-influenced tracks like ‘1:00am’ and ‘Lemon’, they have an eye on the glitterball but they still retrain a modern pop edge, is that what you were aiming for?

For sure! I’m glad you got that; I’m a big pop fan and I also really love disco tracks and songs that are equally inspired by the disco genre. I think it’s such a fun blend of sounds and I love a song you can dance to – even if it’s lyrically kind of sad.

There’s a really empowering element to a track like ‘Champagne Glass’, what inspired it?

‘Champagne Glass’ is basically my “f*ck it, I’m feeling bad and I don’t wanna feel bad anymore, let’s go party!” anthem. Everyone’s been there – when you feel down and you want to be close with people and have fun to distract yourself from your issues. That’s what it’s all about and I stand by it! Friends always help when you feel low.

‘Melt’ has a bittersweet quality, I read it’s about grief but it’s contrasted by the bouncy chorus, do you think you enjoying yourself and going out can help distract you for a bit when you feel bad?

I do think that distraction can work wonders – but with a feeling like grief, it’s harder to just push through it and pretend like nothing’s happened because it comes through in waves when you least expect it. You could be out, acting like everything’s fine, and hear a song on the radio that reminds you of somebody – and then the illusion is gone within moments. So when I was writing ‘Melt’, I wanted to tell my story of grief and how hard it is to cope – but keep it covered in a disco-pop blanket to show that it does get easier, but only with time.

I truly admire all independent LGBTQ+ artists who are pushing forward and doing their thing. My music is specifically inspired by Madonna and Lady Gaga who are both incredible musicians, members of the LGBTQ+ community and activists. I really admire them.

Honestly right now, I’d love to collaborate with Rebecca Black – I think that she’s so cool and I really admire the direction she’s going in with her art and music. Don’t you think we’d make an absolute banger together?!

Do you have any shows lined up?

I’m resting right now honestly, the Revenge Body tour with Tom Aspaul and Birmingham Pride were SO good but has knocked me back (that being said, I’m open to bookings always, so hit me up…)