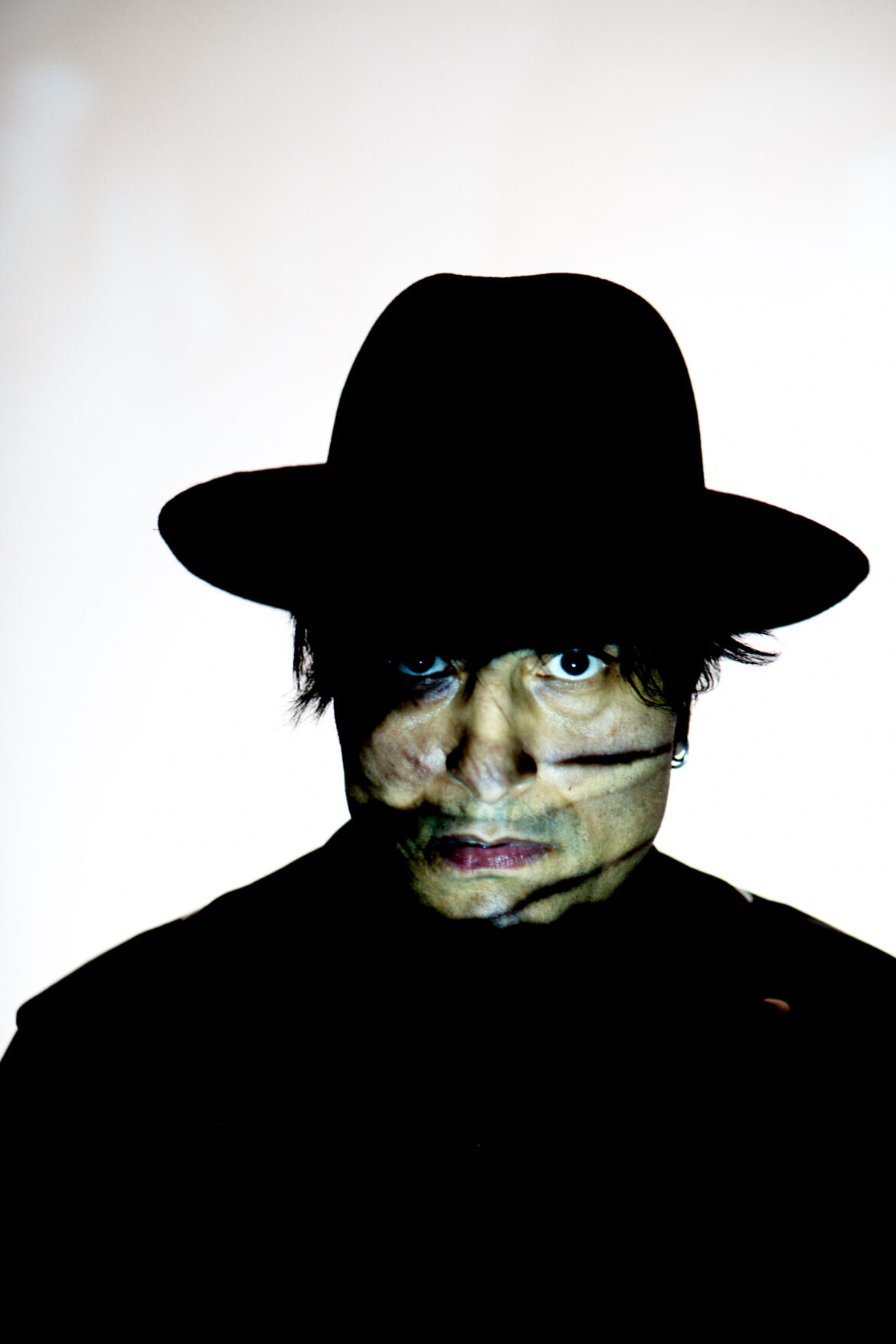 Primitive Ignorant and John Clay discuss the charity Action on Addiction (Who helped save frontman Symren Gharial’s life), creating a drum track using his unborn child’s heartbeat and also, by no means least, there is discussion on the negatives of playlist culture.

‘The place that got me into a life saving rehab ten years ago is now a Pret a Manger in Ladbroke Grove. Addicts are dying everywhere and it’s not their fault.’ – Primitive Ignorant

You’ve gone on record detailing how this EP was meant to be part of an album were it not for Covid related delays at pressing plants. What have been the benefits to the music in its current compendium and would the concept of mortality still apply if your original plan went ahead?

With an album there’s the potential to go much deeper and explore so many different ideas, so it was a shame not to come out with one since that’s what I was working towards. When I’m making music I see it more in terms of creating a film so with an album there’s an opportunity to cast more characters, play them off against each other and navigate a multitude of different landscapes. There’s more time to explain yourself, cultivate tension and pick at answers. The challenge with an EP is to be concise but thorough. It’s still cool because it’s like writing a short story or a scene from a play. Leaving things unresolved can be interesting too. I think the Life and Death idea came to me as soon as I recorded my daughter’s heartbeat in the womb on the day she was born and decided immediately I was going to use it as a drum beat to a song. Amazing that she made a song before she was even born.

Given the playlist culture we’re in, do you ever consider how artists are more than likely to be creating tracks that ultimately gain more rotation via audience curation? In short, does one benefit from providing parts or scenes to the film logic of their playlist creating audience?

I think it’s important to fight against the current system where music is seemingly hurled into the abyss and consumed by the online streaming sites for nothing. It’s poisonous and abusive and nothing I make will intentionally conform to that warped model. There’s something really magical and unrelentingly vital;  about presenting the songs together with a story, characters and artwork, to really take the listener on an indelible voyage. To really deliver people’s spirits to the upper reaches of reality. Once you start conforming it’s all over.

I take it your experience of playlists has not been a comfortable one. Do you believe that such a compendium can detract from the topics you want people to observe?

I think the current streaming setup is particularly uncomfortable for everyone and it’s a problem that goes way beyond the issues I need to discuss in my music. It’s excruciating really. What an indisputable shame it is that human beings are ripping their own culture to shreds, demeaning everything worthwhile, casting aside all morality, stimulation and nourishment for a vacuous nowhere land where people are stripped of their identity and passions and beliefs and integrity are well and truly punished.

Understood. And as for what you are keen to discuss, I’d say Highrise Vampires delivers core sentiments rather well. Is there anything relating to the themes of the song that appeared in your latest video by accident, and also, did any appear by design, considering how loose you and Steve Gullick like to keep the brief.

Working with Steve is a really special experience. I love it so much. The song talks about the remnants of a mutilated body and heart belonging to an outcast who had desperately been trying to find their place in Modern Britain, so the allusion to the Joker in the video makes complete sense. It was unplanned but not accidental. Steve’s vision always enhances and illuminates the sentiment and message in the music so emphatically that really it’s his song too. It’s a total collaboration because he not only creates the film but he takes the music to a different dimension also. I went to his house and we had a very loose plan, intentionally, and shot the whole thing in three hours in his living room. I really treasure his friendship and artistic magic. It’s a massive gift.

Three hours? Are shoots with him always this quick? Also, when you say Joker, you’re referring to the 2019 Todd Phillips film, right?

Yes. the Todd Philips film. It was an unplanned reference that depicts the vibe of the song perfectly I think. This EP deals with with struggle and beauty of life and its precariousness, with the pain and closeness of death but Primitive Ignorant has always been an autobiographical trip that attempts to raise awareness around issues of mental health and addiction, focused on a main character battered by the perils of social hierarchy, the internet, racial hatred and obsession to be and not to be in with the normal folk. It’s in the artistic realisation of a confused identity and a warped compound of regret and hope that you might just set upon the path to freedom.

That’s the thing I appreciate about your work. So many levels. You deal with the death threats received last year in lyric form on one of the tracks. Feel free to talk about this and quote the relevant lines.

Ah thank you so much John.That means a lot to me man. I really believe that meaningful change can take place by sharing personal, intimate experiences reassuring people that they are not alone.That’s how we learn too. Listening to other people’s stories can be revolutionary. Music is such a powerful language because it’s so universal and it brings people together in a way nothing else does. Politicians don’t mean shit to folk. There’s books and films too but music is so instant and so memorable. You can get lost inside songs enabling you to chrystalize your own perspective and find freedom from pain and reach hope. There’s a refuge from the fear around your own reality inside the sound. That’s why songs mean so much to people. They’re transcendental. By revealing the death threats I wanted to talk about prejudice, hierarchy and judgement that exists amongst people of the same race and discuss the worries that I have for contemporary Asian culture as an Asian myself. I was basically told that I was gonna get killed. It’s totally fucked up.

I’d like to think those people who made those threats have ceased in their mission? For those who’ve got into your music recently and don’t know the backstory of the threats, care to fill them in here and perhaps cite a relevant track off the ‘Life or Death’ EP?

Yeah it’s all gone quiet now which is nice. The death threats came as a result of the artwork from the debut album Sikh Punk where my logo was inspired by the Sikh religious symbol and a Black Panther party symbol and that got under the skin of a few. It’s art and nothing else. The whole album was about finding peace with my heritage after years of suffering so it was a shame it was so badly misinterpreted. Oh I’m really happy with the whole EP but I have to talk about the last track where I made music with my yet to be born daughter Amaya, by recording her heartbeat in the womb just before she arrived and then using the heartbeat as the drumbeat to the song. All the work in there has come from her. I played it to her at three months old and she started smiling.

And again, so many proud moments lay before you.

Please do tell us more about the proceeds of the track. The charity that helped you through addiction certainly deserves some coverage, yes?

The Last In The Riot Sordid Sound System remix proceeds are going to the charity Action On Addiction which helped me so much at the start of my recovery ten years ago. It was so great to work with Stuart on the track. He’s really amazing and took the song in a new magical direction. With drug related deaths on the rise, the perpetual misunderstanding around addiction being an illness, addicts being castaway in prison and the Government cuts to all mental health services it felt really important to raise awareness around the issues of addiction and how it’s perceived in society. It’s so hard to get help now. The place that got me into a life saving rehab ten years ago is now a Pret a Manger in Ladbroke Grove. Addicts are dying everywhere and it’s not their fault. I’ll never be able to repay the help that has been given to me over the years but I can try to raise a bit of awareness and hopefully allow someone somewhere to know they are not alone with their illness.

Important points there and on the subject of less finance for mental health services you have my deepest empathy. Did you meet anyone in your time in rehabilitation that you learned from or made an impact in your more stable present?

Oh definitely. I think I learned something from everyone there. When you’re at the bottom every conversation is extremely valuable, particularly after such a long period in isolation picking up cigarettes off the street. There is something quite freeing about being close to the end. It’s in that moment that your battered human remains might just be able to harness a molecule of hope and a life can be rebuilt.

Of course. There is so much ground left to cover, and unfortunately there is only so much we can do in this one piece. Do make a note to talk to us again should other releases be in the pipeline. Thank you so much for thinking of us in relating your story.

Ah thank you so much John it was great to talk to you as always!