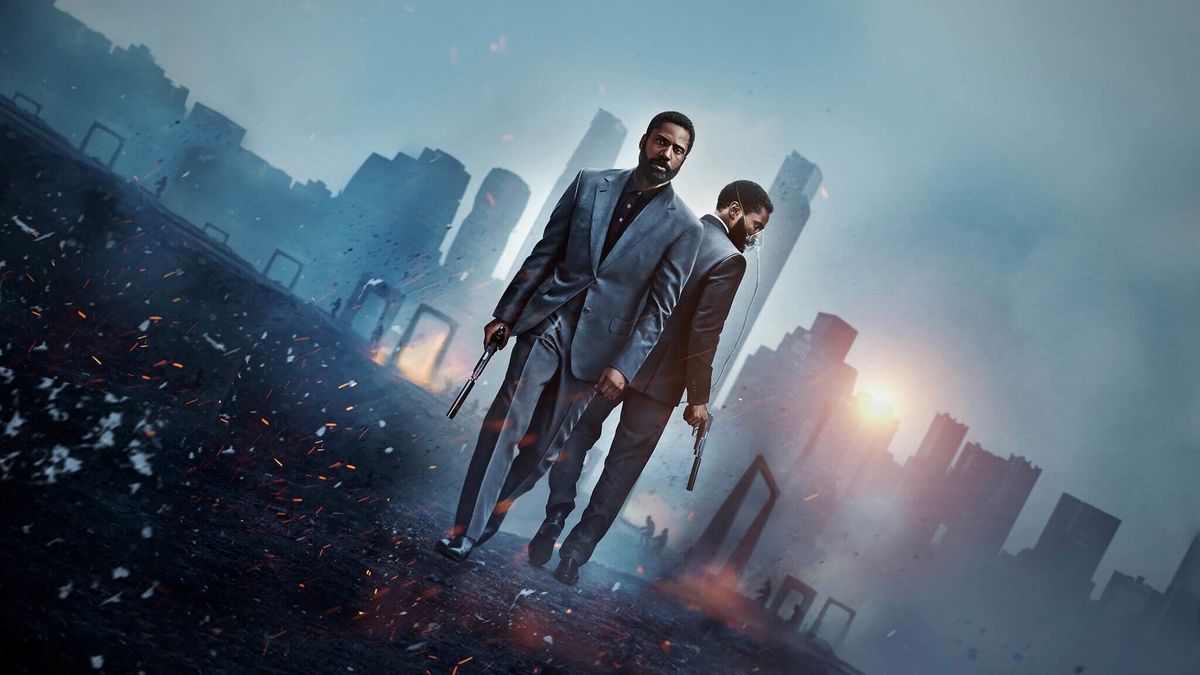 Ever since his debut feature Memento the release of a new Christopher Nolan film has been a Major Cultural Event. With cinemas lying dormant in the wake of the Covid-19 shutdown, the release of Tenet has taken on an even greater significance. No other major film has been released in the wake of lockdown being eased and, of all the filmmakers currently working, it seems entirely appropriate that this most ambitious and ground breaking of directors should be the one to take on that role.

It needed a true event movie to drag us back to the auditoriums, and Nolan is an event movie master like no other. John David Washington stars as The Protagonist, a CIA agent recruited by a shadowy organisation following a siege an a Ukrainian opera, an opening sequence that makes The Dark Knight’s opening bank robbery look like an episode of Spooks. His mission quickly takes him bungee jumping into a building in Mumbai and taking part in spectacular car chases in Estonia.

So far, it sounds like a fairly bog-standard, Bond-esque international espionage thriller. It even has an overblown, Blofeld-esque baddie in the shape of a Russian oligarch Andrei Sator, played by a gloriously hammy Kenneth Branagh, but this is just the jumping off point for a genuinely mind-bending plot which it would frankly be futile to sum up. If you thought Inception was a metaphysical brain twister, you ain’t seen nothing yet. “Don’t try to understand it,” Clemence Poesy’s scientist tells Washington early on, and this may serve as sound advice for the audience. Sometimes in cinema, it’s important to just ‘go with it’, and, when you’re dealing with a film where bullets being sucked back into a gun is the simplest plot point to deal with, this maxim has probably never been more true than it is here.

It’s very rare these days that any sequence in film can make you mouth a silent ‘woah’, but there are several such sequences here.
At times, though, it does feel like you’re watching ‘A CHRISTPHOER NOLAN FILM’. All the staples of his recent output are present are correct; Michael Caine cameo? Check. Flamboyant support from hot young Brit thesp? Check (for Robert Pattinson here, read Tom Hardy in Inception). Honking great score? Check, here provided by Ludwig Goransson rather than usual collaborator Hans Zimmer. It’s so huge, so overblown, in that at time it risks jumping the shark in Nolan’s apparent attempts to out-Nolan himself. A welcome new addition to the usual Nolan regulars is John David Washington, who seems to have almost come from nowhere in the last few years before starring in the brilliant BlacKKKlansman and now proving himself comfortable carrying a major movie, and establishing himself as the next big action star.

While his technical craftsmanship cannot be called into question, one frequent criticism of Nolan’s work is that it lacks emotional resonance. I’ve never agreed with that assessment, finding emotional impact even is his Dark Knight trilogy, but in Tenet, the criticism may be a fair one. The plot and action sequences are at times so preposterous that it’s hard to find an emotional grounding, with elements like Sator’s wife Kat’s relationship with her son, clearly there to give some sentimental heft, essentially being blown away by the next half-backwards fight scene or 747 crashing into a warehouse. Even this troubling emotional dynamic seems oddly, presciently apt, however, watching it in a time when we have stopped interacting with each other in the normal ways. I sat alone, wearing a mask and reeking of hand sanitiser, as the people on screen displayed a wariness of each other, often struggling to communicate through masks. Yet another reason why this was the perfect film to herald a return of the cinema-going experience.

From a technical point of view, visually the film is unremittingly spectacular, but one aspect where this is lacking is in the sound. With the huge score and loud sound affects unrelenting, in several scenes it’s difficult to hear what seems like fairly crucial dialogue. In a film this confusing, being able to hear exposition is an absolute necessity, so it’s frustrating at times that, either due to characters talking through masks or intrusive background noise, dialogue here is at times so garbled it makes Bane in The Dark Knight Rises sound like he’s talking in perfect received pronunciation.

Whether in the long-term Tenet proves to be an enduring classic both on the big screen and on DVD in the way I believe most of his output will be, or something to simply experience on the big screen remains to be seen, and a second viewing is undoubtedly necessary for me to fully process and digest it. Despite its flaws though, and given the time in which it is being viewed, it’s hard to emerge from the experience feeling that Tenet is anything but a triumph.