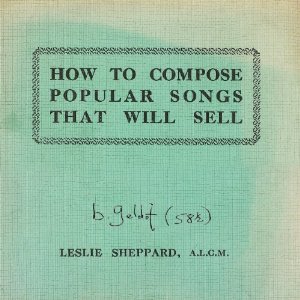 You got to feel sorry for poor old Bob. There he is releasing his latest album, after a long-drawn out radio silence and hiatus of ten years, only to be usurped by his fatuous useless arriviste daughter, Peaches; whose alleged carefree kleptomaniac and promiscuous endeavors have eroded any chances of him being granted a fair hearing.

As it transpires, How To Compose Popular Songs That Will Sell, is in a sense a disappointment; its attempt to absorb and mirror a myriad of different writing styles ends up sounding like a hackneyed, over-ripe collection of karaoke pastiches.

In fact, I’m never quite sure if Geldof is sincere, or if he’s having a lend of us. This is in part attributed to the final bowing-out ode to the old country, ‘Young And Sober’; a parodied Irish benevolent swansong that spins the fable of Geldof’s life, whilst a bar-room piano and set of spoons tinker away; the lyrics betraying a mock but ratty poke at – I take it – his critics.

Those sentimental central themes of old memories, regret and unacquainted love, all run deep as Bob inches ever closer to obtaining a free bus pass – yes believe it or not he’s nearing 60.

Premature maybe, but this LP seems to suggest that he’s either settling down, or clearing out the reflective baggage, before moving on to newer pastures.

Stepping into the shoes of a lesser Scott Walker and Leonard Cohen type hush and whispering crooner, Bob turns out a sophisticated lovelorn prose; sauntering along the boulevard on the Gallic charm of ‘She’s A Lover’.

That French ‘Left Bank’ influence continues on the equally resigned philosophical declaration to love, ‘To Live In Love’. Ghostly accordion and mandolin linger as Geldof bemoans such proverbial pathos as, “To live with love is meaningless”, though he counters this later with, “Life without love is futility”.

Overtones are made towards the Travelling Wilburys, and in particular the slide guitar pulchritude gestures of George Harrison, on ‘Here’s To You’, whilst a Dennis Wilson fronted Mercury Rev tentative feel can be heard on ‘Blow’.

Strangely all these songs sound uncannily familiar; lyrics appropriated from The Lovin Spoonful’s ‘Summer In The City’ for instances, kick-start the albums opening ‘How I Roll’. Coldplay, Nick Cave, Alabama 3 and The Beatles are just some of the influences to found on this record.

For all its faults, Geldof’s voice has never sounded richer, and the production, if at times too crisp, is very clean cut – former Boomtown Rats sparring partner Pete Briquette, is once again called upon to produce.

Remarkably this is only his 5th solo album to date, and this is perhaps why it feels like some kind of exercise in catching-up on the last decade’s worth of guitar-based music.

Surely though, with all the saintly credits stacked up in his favour, we can forgive the songwriter, and cut him some slack. I’m sure as hell this record will at least appeal to the Radio 2 audience, with its leanings towards the ear of a mature listener.