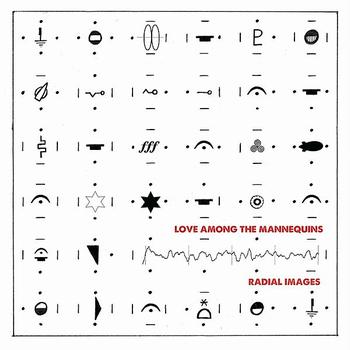 As ‘Radial Images’ has dutifully aided my commute daily for the last month, I yearn to offer the time spent recording this LP, and its reading list of citations, a just appraisal. Given my hopeless lack of knowledge with regard to the latter, and my condensed understanding of the former, my goal is wholly unlikely. Besides, it’s already been achieved to a greatly refreshing affect here. Comparatively, my poly-syllabic nonsense may not appease.

Maybe a change of tact then. It would be obligatory at this point to mention that the band comprises members of Elle Milano and Meet Me in St. Louis, but this too is vacant considering their current guise does more than enough to stand independently on its own eight feet.

So where to start?

8:45am: Lock the front door, light the second cigarette of the day and press play. The self-titled echoes that sketch the record’s inception can teach a lot in their 45 second lifespan, namely that there’s a wealth of session material which didn’t make the final cut, and that the quartet are innovative to the point of longing interest. Whatever you draw from this foreshadowing, it becomes stark (as you turn the corner onto Station Road) that there’s adventure afoot, a story to be told, and something to be learned from it.

Indeed the narrative bursts into life, with ‘Nikolai Fydorovich Fyodorov’ no less, laying cards bare on the table with an indomitable hand. Cries of ‘Brahma, Shiva, Vishnu, Malkuth, Yesod, Tiferet’ seem to resurrect Kill Kenada’s Tim Smithen in timbre (which in itself if enough to set hearts racing), while the time dedicated to finding those guitars tones will undoubtedly be rewarding over the course. No false promises, no disregard.

8:55am: Having inevitably missed the train by a minute, I’m offered another five to savour the joys of the platform and the next chapter of this album. ‘Raoul Duke’ – a reference I do get, is as tatty and paranoid as you’d expect, offering a disenchanted lullaby with a brooding undercurrent brought to the fore as soon as the distortion pedal clicks into its active setting. As it does so, it unerringly demands a fuck yes.

‘Johann Wolfgang Von Goethe’ too is a triumph, with its groove twisting from the lead of the guitar to the assurance of the drums. ‘Let man’s dim soul regard this toy world as a perfect whole’ is shrewdly punctuated by ‘oh snap!’, and it’s clear the discourse has no trouble scaling such ever-accenting terrain. The compelling vibrancy of these lyrics becomes more an awe as the record uncoils, and the train skulks into view.

9:02am: As (violin) strings begin to loosen during the 30 second interlude of ‘L.V.B. A La A.S.‘, momentarily we’re in ‘Rossz Csillag Alatt Született‘ territory, before the respite allays into the familiarity of single ‘Alfred Garyevich Schinittke‘, as opposed to a kick/snare apocalypse. This is always to the dismay of my fellow passengers, as the high-end melody pierces the surrounding airwaves (themselves congealing with coughs, sneezes and flatulence). I silently offer my own regret that they are not party to the sum of all parts, as ‘Schinittke‘ itself is an astute commentary; circling the notion of ‘wearing Beethoven’s Burtons’ line‘, which is a concept nothing short of genius.

Incorporated here is a wider remark on the louche, high-browed debasement of the sonic arts, with the sharpest of tongues delivering a cutting resentment;

…Mann being further undermined with the line;

‘With a one, two, a la recherche du temps perdu [in search of lost time], three, four, a graphic score from a flip of a coin or a software algorithm.’

9:07am: The reassuring calm of ‘George Robert Price’ facilitates the scaling of Liverpool St. forecourt during rush hour, no more so than in the accuracy of the query ‘Who’d have thought that entropy could outmanoeuvre empathy?’. Through the barriers, descend the stairs, and the sight of a saturated platform is married to my ear as ‘…Price’ delivers its payload of monumental burst. This is a wholly gratifying moment. As the dynamics wilt and the tube sweeps in, the track culminates in palm-mutes that resonate like thumping heartbeats faltering.

9:11am: ‘The Does‘ seems, to my misinformed mind, the most cynical of marriage disposals – coupling wed with death, perhaps citing such an event past, although again unto my own knowledge. Indeed, the duet between male and female vocalists (‘John, Jane’) flickers with the porcelain fragility of Andrew Mears/Galina Rin as they laid ‘Recovery Speak‘ to rest in 2004. You can try to decipher the meaning for yourself, here;

The parallels drawn with Pavement by others are for the most true in gems like ‘Marcel Marceau‘, which in essence is instrumental folly with a hands-in-pocket swagger. As it concludes, a flare of applause is justified, but before the notion of an assumed arrogance sets, you realises the claps prefix an anecdote from (I assume, given the track’s parentheses) Alan Watts, which in turn gives way to ‘The Twentieth Century’ (hear below). The four-part verse is morose in weight but never to the point of unwanted agitation, before it ruptures into a huge wave of warm fuzz and delighting cacophony. Another high watermark.

‘Raskolnikov’s Horse’ is altogether more urgent in tempo, necessarily so as at 9:28am as I realise I’ll be late again. However, this dawning awareness is put into the context of triviality against ‘that hip-whippin’, eye-trippin’ pre-Freudian joie de vivre’.

Vocals on ‘James Graham Ballard’ – the LP’s closer – are reminiscent of Frank Turner back when he was armed only with a microphone, and was prophesising ‘Chinua Achebe Will Have His Revenge on EC1’. It ties the whole experience together justly, with growing ambition and pace, before culminating in a drop D respiratory relapse.

At 9:38am I remember again that this is a spherical cow of an album; you’ll run its course before truly becoming aware of the track count or passing of time, and can (and should) repeat play without noticing an obvious break in onslaught. As I fall into my desk chair, I’m saddened that, for me, this reprise cannot be immediately so.