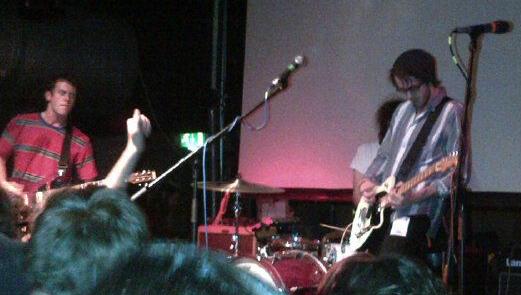 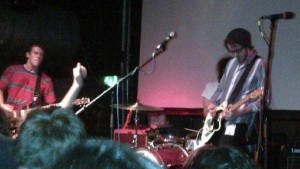 Cloud Nothings’s Attack On Memory is one of my most played releases of 2012 so far.  Though offering nothing new in their sound as such, the album is a triumph in its ability to breathe life into the lifeless.  Distorted guitars coupled with tight hooks may be chic once again, but whilst it’s difficult to get excited about some of their peers’s pure pastiche, Cloud Nothings have succeeded in creating something worthy of its forebears.

Now identifiable as a four piece band and not just Dylan Baldi’s solo project, the set list consisted of the eight tracks from Attack On Memory and nothing else.  Shortly after taking to the stage, smiles beaming and with Joe Boyer sharing his supply of beer cans with a willing crowd (and later bananas from TJ Duke too).  The atmosphere was surprisingly subdued as the band opened with their devilishly catchy Stay Useless, and it wasn’t until the frantic verse of Fall In that the inevitable pit opened up.  By the time they started playing Separation, it was all out frenzy.  Not even Baldi spitting his gum crowdwards could detract from the energy.

The enthusiasm with which they played was evident as Joe managed to break a string not long before Jayson Gerycz pierced the skin of his snare.  A relaxed pause followed as the band replaced their instruments with those borrowed from underwhelming support act Virginia Wing as though this were business as usual.  Though their songs possess a timeless, anthemic quality that could see huge future commercial success if they chose to follow that path, it’s moments like these that remind you they are four men scraping by in venues which can’t even engineer their sound properly.

It was a far from a flawless performance, the overblown Wasted Days which just about justifies its nine minute run time on record dragged like a Mars Volta show over the fifteen or so minutes they stretched out the breakdown.  However, even when combined with Jayson’s struggles to keep up with his own fills, the roughness around the edges somehow just made it all the more endearing.

The technical problems came to a head when half way through Our Plans, the electrics on the lights and PA cut out, leaving a darkened venue, no vocals, but somehow with the amplifiers still powered.  It was as though the spirit of Attack On Memory producer Steve Albini himself had coursed through the venue, returning the sound to its core, uncoloured components as the band valiantly continued in their semi-acoustic setup.  I just wish he’d left the microphones on.  Undeterred by this turn of events, the band not only played to the end of the song, they played through a semi-instrumental rendition of No Future/No Past with the crowd helping fill the gaps wherever they knew the lyrics.  A valiant effort that somehow added to the event on the whole, showing a unified determination of the four to get their message across at all possible costs, regardless of any problems that stood in their way.