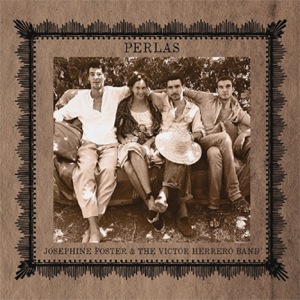 A sepia-toned Josephine Foster pauses for a moment from her duties of quenching the thirst of the locals, gathered at the terracotta, sun-bleached, cantina. She looks out over a southern Spanish coastline, dreaming of escape. Or at least that’s the picture I have in my mind as the opening, waltzing, sagacious backing of Puerto de Santa Maria earnestly wafts in from an atavistic age.  This tribute to the historically famous bay near Cadiz – in myth, the sanctuary after the Trojan war, for the Greek official, Menestheus; the port re-named for its trade in salt by the conquering Moors; and the harbour from which Christopher Columbus set sail for his second expedition to the Americas – is also where the classically-trained, high-brow, Foster and Victor Herrero, and his band, recorded this follow-up to their much cherished 2010 album, Anda Jaleo. That bygone revision of poems and songs from the ‘old country’, so impressed this reviewer that it made my top choice albums of the year list – a worthy endorsement, if I do say so myself.

Equally as warm and congruous – recorded live onto analogue tape – Perlas (or Pearl) repeats the exercise of injecting life into ‘dusty old scores’; once again selecting a host of commendable and traditional odes from Castille, Santander, Costa Brava and the Basque country. Foster’s vocals belong in part to the times in which she channels. Quivering to Carmen operatic proportions on the, charmingly rustic, sonnet, Cuatro Pines, and warbling like a Theremin on the Medieval Castilian, assonance, fable of the Moor, Abenámar. Herrero is on hand to harmonise and offer an earthy timbre on duets; adding a dash of resignation on the harmonica, bequeathed, Cuando Vienes del Monte, and tenderly sighing on the bobbing, Mediterranean meander, Dame esa Flor. A second baritone voice joins in as the band pull-up their wagons on the MGM backlot for Tex-Mex boarder, campfire sing-a-long, Peregrino.

Loss, longing, desire and sorrow are all enacted and played-out over Flamenco flourishes, black-veil shrouded matinee wails, and jaunty quicksteps. Sticking to the Foster/Herrero blueprint for the most part, there is on occasion a brighter, more upbeat, mood to the catalogue of songs, this time around. Though the themes are generally the same, covering tales of the Islamic colonised south through to the stoic stands made during  the civil war years; yet this ten-track affair definitely has a sunnier disposition.

The authentic nature and antiquated sound may not suit everyone’s taste, but there’s something positively alluring and comforting about these Spanish laments that by sheer coincidence happen to appear just as Spain muddles through another historical epoch of upheaval.

A strong contender for this years best albums for sure.