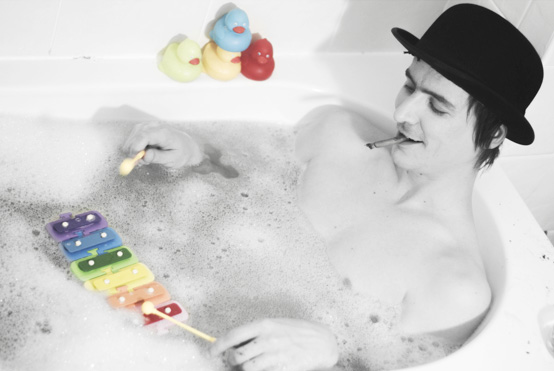 Jim Noir follows his own path, that’s for sure, but one with enough followers of his cult (for such it must surely be) to have released an EP a month to his fans for the past year. This isn’t part of that particular project, nor apparently is it “another one of his concept albums”. Instead, it’s a taking of stock, a gathering of songs, some fresh and some of them from early in his career, re-worked and up-cycled into brand new works.

It could really only have its genesis in some northern city. Yes, you can call it pop if you must, but the sort that can be best seen through a kaleidoscope owned by the late great Frank Sidebottom. Musically, it’s airy, whimsical, very English despite the shimmery echoes of a summer of love vibe. The sort of summer of love you’re more likely to find in Rhyl Sun Centre than San Jose.

Songs such as ‘Ping Pong Time Tennis’ deal us stream of consciousness lines about sending letters to the Queen, not getting a reply and imagining that it’s most likely because Her Majesty is dealing with corgi shit that is impossible to get out of shirts or that she’s “happiest when she’s hoovering”. It treads a line between satire and whimsy, like a rather more likeable Mark E. Smith.

I’m not usually a big one for ‘wry humour’ in my music listening, and am therefore the perfect test-bed for Jim’s ability to reach beyond his already established devotees. The big question is whether I would ever reach for this on one of those afternoons when I need a boost to gird my loins for adventure instead of settling in front of the TV. The answer is a qualified yes. I’ll certainly keep coming back to see if Mr. Noir has produced anything more like ‘The Cheese Of Jim’s Command’ which is, despite its frankly silly and off-putting title, easily the strongest song on the album. It’s the one that would get me in the mood, and unsurprisingly, is also the straightest song, the furthest from pub humour.