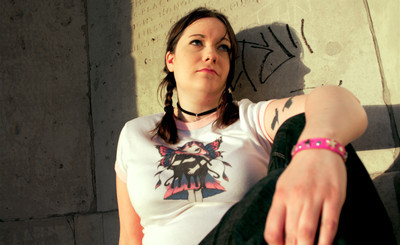 London based Gaptooth‘s first self released single(out December 10th) is a rather brill 90s-esque post-feminist electro pop tune brimful of personality and thought.‘It’s a man’s world, it’s a man’s business’ sighs Gaptooth aka Basingstoke born Hannah, surfing a choppy suite of synths and almost trip hop beats in the verses, her clever pointed couplets sneer pleasingly about the duality of ‘Ladykillers’ men that objectify women: womanisers, or worst still abusers ( for example: “If you’re not above cheating, if you’re not above beating…”‘). Rippling with female empowerment, ruminations on ‘man made devastation’ and political insight ‘Lady Killers’ carries the sharp lyrical suss of Le Tigre, and when the biting buzz guitar hook and chorus kicks in it reminds me of Republica‘s ‘Ready To Go,’ yeah in a good way. While the synth laden with guitars turned up to ’11’  outro speeds out into the distance kicking up dirt in the eyes of former lovers. Co- producing her own tracks with A Scholar and a Physician (Foals, Piney Gir, Anat Ben David, Chicks on Speed) Gaptooth is a fiercely good project elevating the (personal) politics of the everyday into thought provoking hook laden pop songs, it’s worthy of your immediate attention. Press play below!

You can also listen to the rather fine DREAMTRAK DIAMOND SOUND remix here too!