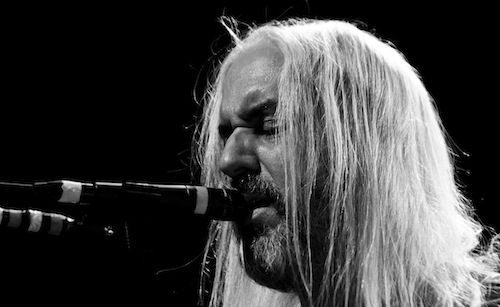 The first thing you see is the hair. As the sold out crowd at Camden’s Electric Ballroom cheer when the lights dim it’s the grey, lank hair of Dinosaur JR frontman and guitarist J Mascis as he shuffles out onstage that elicit the most cheers tonight. Throughout his work with the Seminal Fuzz/Grunge/Noise/Indie (delete as applicable) Rockers it has been J Mascis who has been cast as the prototype slacker. With his laid back to the point of unconscious drawl and unkempt appearance Mascis defined the visual aesthetic of 90’s indie rock, separating himself and also his peers from the preening fashion show that was (and sadly still is) prevalent in most music scenes.

It’s also Mascis that has been the mainstay of Dinosaur Jr over the years. Following bust-ups and ‘Creative Differences’ with original members Lou Barlow and drummer Murph it was J that weathered the band through its commercial peak while cementing his reputation as one of the most iconic guitarists of his genre, peer group and maybe even his era. Buried under layers of dirty, abrasive feedback and fuzzboxes Mascis drenches Dinosaur Jr songs in gorgeous, melodic solo’s (doing so even in the 90’s when the word ‘Solo’ was almost forbidden).

So as the newly reconciled original line up (well, 2005) come onstage and launch into ‘the Lung’ it’s both heart-warming yet still sadly underwhelming at the same time. Maybe it was the Electric Ballrooms muddy sound or the expectation of a band whose legendary preference for blistering walls of noise coupled with J Mascis’s three huge Marshall Stacks giving the visual premise that this was going to be an earplugs only affair that were at odds with the almost pedestrian performance by the band. Maybe it’s a reformation that should be left as a fantasy music wish. Sure, last years ‘I Bet on Sky’ had its moments but compared to the magic of albums like ‘Where You Been’ (songs like Start Choppin’ and Out There receiving the biggest cheers) it sounds like how it sounds tonight, meandering jams that wait around for a song saving Mascis solo.

And solo he does. Maybe one of the only guitarists in the last 20 years that can hold an audience’s attention, Mascis pulls overdriven, fuzzed out notes from his Jazzmaster making the crowd ‘ooh’ and ‘ahh’ like children at a circus for each one of his epic guitar workouts. The diehard fans who scream for Lou Barlow when he steps up to the mic or when drummer Murph moves his cymbal forward are rewarded with a cover of Mascis and Barlow’s pre-Dino hardcore band Deep Wound’s furious ‘Training Ground’ which sees Lou Barlow (who looks like he really hasn’t aged at all, maybe Sebadoh was a musical Picture of Dorian Gray) take vocals and scream along for the songs short duration.

The biggest response comes however for some of the output of Dinosaur Jr’s major label years. The arpeggiated opener to ‘Feel the Pain’ the iconic choppy opening riff to ‘Start Choppin’ and the dirty minor chords of ‘Out There’ remind you that some of the bands best work took place as Dinosaur Jr were at their commercial and critical peak. It’s a shame that so many highlights are lost in the dull sound of the Electric Ballroom. Even the buzzsaw jangle pop of ‘The Wagon’ has to fight its way out of the all too quiet P.A. it’s the same sound that turns set closer, the bands cover of ‘Just Like Heaven’ by The Cure, into more of a wind-down than a gloriously ear-bleeding finale.

As the audience start to leave you can’t help but wonder in today’s musical climate of reformations and reunions how far nostalgia can carry a band until you wish they hadn’t decided to do either of the above. Maybe nostalgia can turn a band into something legendary that is impossible to live up to in the reality of a live show. Dinosaurs Jr tonight certainly do not fall into that category but still they were heartbreakingly average.