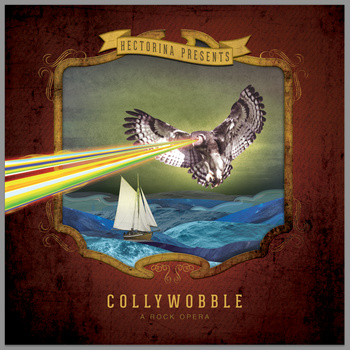 Holy shit what a deranged racket, damn well nearly laughed our kidneys off when this fried joker reared into ear shot. A short note from Dylan of the Charlotte NC based combo Hectorina casually preps us for the arrival of the bands debuting double disc set ‘Collywobble’ which get this is loosely based on the life of a former astronaut by the name of Jonah Collywobble who hooks up with a group of inter dimensional explorers on their search for the gateway to heaven. Now I know it’s a lot to take in so I’ll give you a second to digest all that……ready. Okay. Described as a mathy avant garage band Hectorina have just posted up a by way of introductions teaser cut as a taster for what’s to come entitled ‘“An Inter-dimensional Spat for the Right to Walk Away the Victor’ which I’m sure you’ll agree based on title alone is deserving of a listen. What manifests within the next 3 minutes and 58 seconds is an acutely wild and wayward head fryer whose frenetic psychofied and progged out opera imagines an as were Sparks had they sported chest hair, feral face fuzz and persisted with a worrying penchant for Clockwork Orange whilst wearing straightjackets and upturned flower pots on their heads. An absolutely barking voyage on the good ship insane which to its credit manages to pressgang upon its melodic mayhem an assortment of Thumper Monkey, Crimson, Zappa, the Cardiacs and the Cravats types. Will melts heads – we need the blighter in our life right now.