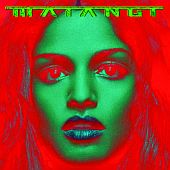 Some albums take a bit of reworking to get just right. Often a singular minded artist can’t bear to part with their baby, other times a record label is being, well… a record label.

M.I.A has been trying to release ‘Matangi’ for well over six months, at one point claiming that the album was sent back by Universal because it wasn’t ‘dark’ enough which comes as a surprise, as this album positively sparkles at times.

Whether the high-spirited enthusiasm comes through a new, spiritual outlook on life that led to M.I.A naming the album after a Hindu goddess of music (Mathangi also happens to be Maya’s birth name), or it simply comes from her now familiar joie de vivre in pushing people’s buttons is neither here nor there. What is startlingly clear is that the energy that drives this album is personal and deeply felt. What’s more, it retains a warmth (wherever it has come) that manifests itself in a playfulness that softens the more polemical edges we’ve come to expect from M.I.A albums. Perhaps this comes from the comfort of being more of a known quantity, where intentions are less likely to be mixed up. As she says on Matangi, “If you’re gonna be me you need a manifesto, if you ain’t got one, better get one presto”.

The problem with an album that has seen a fight between artist and record company, particularly between an artist who so clearly enjoyed making an album and wants it to be heard, is that there are bound to be compromises. Whether these compromises are what is bearing out in the sense of incoherence, that at times jars, is unclear. What’s more interesting is whether incoherence in an album such is this is a bad thing at all. Few of the fifteen tracks feel like filler, including the Boom(Skit) which addresses the Superbowl furore, race, fame and Madonna comparisons, and each track retains a focus and purpose of its own. In some ways, ‘Matangi’ could stand as a Greatest Hits compilation, made entirely of new material. As an album you may be left wanting for more, but as a collection of songs that are affecting in personal politics whilst joyful in sheer unbridled optimism, ‘Matangi’ see’s M.I.A on top form.