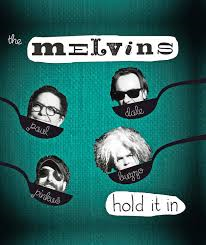 People often ask me, “Hey Matt, what is it you love about the Melvins so much?” To this I say, well, for a start it’s just Melvins, not the Melvins—you tend not to see the preceding definite article so much, and if you do it’s usually parenthesized. You know, between brackets. Having said that, it does appear on the artwork of their new album without the brackets, so… go figure! If, by this point, the other person hasn’t either walked away or punched me in the face, I’ll answer their original question as best I can, counting off the reasons with the fingers and thumbs of both hands until I run out of digits (yes, there are that many).

For the purposes of this review, however, I’ll try to be more concise. Melvins have been making their own, uncompromising brand of rock music for thirty years now; music that straddles the great divide between accessible and abstruse with astonishing ease. They’ve influenced everyone from Mastodon to Tool, and they were once produced by Kurt Cobain—but as guitarist and vocalist Buzz Osborne freely admits, it wasn’t a happy time for either party. They also recorded one of the greatest albums of the noughties with former Dead Kennedys man, Jello Biafra, in the form of Never Breathe What You Can’t See, though that was technically Jello’s baby so… y’know. Erm, what else? Buzz’s hair? Their song titles? (‘Piss Pisstoferson’ and ‘Onions Make The Milk Taste Bad’ are just two of my favourites from their latest release). I could go on, but I did say I was going to be concise, didn’t I? In which case, I think that’ll do…

Anyway. Hold It In, released via Mike Patton’s Ipecac label, is the Los Angeles-based group’s first studio album as a quartet since 2010’s The Bride Screamed Murder. For this one, Buzz and Dale (Crover, skinsman par excellence and the other half of the band’s only permanent members) are joined by long-time buddies Paul Leary (guitar) and JD Pinkus (bass) from Butthole Surfers.

Judging by the majority of the 12 tracks that make up Hold It In, their integration was the most natural thing in the world, and aside from the second track, ‘You Can Make Me Wait’—a smash hit pop song from an alternative universe, with its filtered vocals, jangly guitars and soaring solo—it’s very much business as usual for Buzz and the boys. It should be noted, however, that “business” for Melvins means doing whatever the heck they like. And so what we get here is a veritable smorgasbord of deliciously crunchy, riff-driven delights, peppered with shout-along choruses and wild, psych-rock meanderings, as well as some of the catchiest tunes they’ve delivered in donkeys. ‘Onions Make The Milk Taste Bad’ is classic Melvins—for those that consider their mid-nineties, Stoner Witch album “classic”—replete with Osborne’s trademark snarl and a riff reminiscent of ‘Revolve’ from that GGGarth-produced LP. ‘Piss Pisstoferson’, meanwhile, could not be more aptly titled, and comes on like New Hampshire bruisers Scissorfight—a band, like so many of their ilk, that simply wouldn’t exist were it not for (the) Melvins. To those bands—and to everyone else, for that matter— I say this: Bow down, bitches. The masters are back.

There. Told you I could be concise.