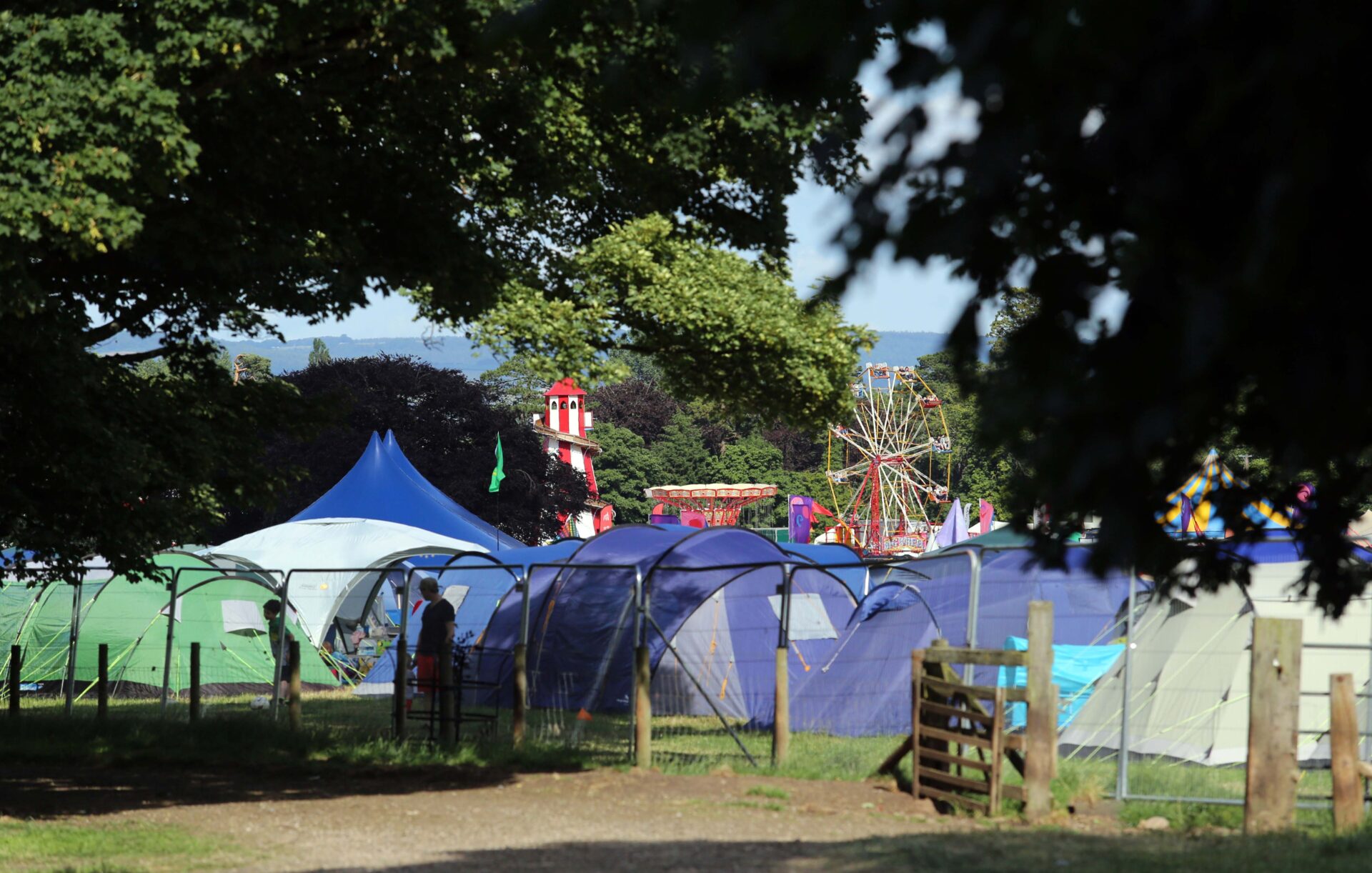 For the first time in its six-year history, Deer Shed Festival sold out its entire 8,000 capacity ticket allocation. And having just spent three days in its most estimable company it is not difficult to see the reasons why.

Set in beautiful rolling countryside outside the North Yorkshire market town of Thirsk, Deer Shed has quickly established itself as the jewel in the north of England’s summer festival crown. It is warm, welcoming and really rather wonderful.

Promoted as the “kid and family-friendly music and arts festival” Deer Shed’s emphasis has always been on children and their entertainment. In keeping with previous years, the event is built around a theme – this year it was Up In The Air – and all manner of innovative, experimental, educational and fun-filled activities stem from this. Everything you could imagine from match rockets, paper clip aeroplanes, and flight-centric films (Top Gun, Fly Away Home and Galaxy Quest) to magnificent birds of prey and hot air balloon rides could be found in the grounds of Baldersby Park this weekend.

But Deer Shed is not only about the children. It is a cultural event that strives to offer something to people of all ages, both young and old alike. And as music gradually moves ever further into the festival’s main spotlight, it is an ethos that is reflected in this year’s line-up.

As the festival draws to a rain-splattered but triumphant close early on Sunday evening – this year though, for the very first time, people were given the option of extending their Deer Shed experience until the Monday – this broad musical spectrum is distilled into one magnificent song. Sisters Rachel and Becky don their clog dancing shoes and lead The Unthanks through the title track of their latest album, the most fittingly entitled Mount the Air. Backed by Adrian McNally’s piano, an imperious string section and Lizzie Jones’ emotive trumpet, the Tyneside group transform their more traditional folk sound into something that is altogether more expansive, embracing the wide open landscapes of Miles Davis-era Sketches of Spain and grandiloquent pop as they do so. It is an exhilarating journey.

It is hard to believe that two full days has suddenly passed. It is now almost 48 hours since Diagrams took to this very stage and set the perfect tone for the rest of the weekend with the warm contentment of their sound. ‘Gentle Morning Song’ – taken from the band’s most recent album, Chromatics – bubbled with shameless pleasure, glorious harmonies and a single, soaring trumpet.

They were followed onto the main stage by The Felice Brothers, playing their last show in the UK for a while and signing off in some considerable style with a set that brought with it a rousing accordion, fiddle, washboard and palpable sense of down-home charm. Despite a seven-hour journey to arrive here, Beth Jeans Houghton in her new guise as Du Blonde showed no signs of fatigue. Unrecognisable from the person who last appeared here three years back fronting folk-experimentalists the Hooves of Destiny, she bristles with an energy that seems borne of her musical metamorphosis into an altogether more edgy proto-punk siren. The malevolent blues of ‘Hunter’ and the band’s cover of Pixies‘ ‘Where Is My Mind?’ showcase Beth Jeans Houghton’s versatility and emergence as a real talent.

Billy Bragg proves beyond any reasonable doubt that activism still has a place in music. He brings a political voice to Deer Shed, one whose message is conveyed with heart, honesty, humility and no little humour. Mindful of his audience – and in amongst the other great songs of Woody Guthrie‘s that he performed here – Bragg gave us the founding father of protest music’s ‘Dry Bed’, a rather amusing children’s song about nocturnal incontinence. Backed by CJ Hillman on a pedal steel guitar that “whistled like the west wind”, Bragg also showed that Guthrie’s ‘Ain’t Got No Home’ is still as relevant today as it was when he wrote about the migrant camps of the late 1930s. His interpretation of Anais Mitchell‘s ‘Why We Build The Wall’ was equally pertinent and no less moving.

Bragg was back again the following lunchtime, this time being interviewed by The Guardian’s Dave Simpson in the Obelisk tent. Describing himself as “more Max Miller than Mick Jagger”, he spoke entertainingly and with great insight, erudition and feeling about everything from British Fascism, his home town of Barking, Russian cosmonauts, his time in the army and politics to the influence John Peel had on his career despite the late, great broadcaster having initially played ‘The Milkman of Human Kindness’ at the wrong speed on his BBC radio show. Billy Bragg is a man for whom the term “top bloke” was surely invented.

Billy Bragg’s passion and commitment seemed to set the tone for the rest of Saturday as act after act stepped up to the plate with performances that oozed enthusiasm, excitement and energy. Kilmarnock’s very own Fatherson turned melodic, stadium-sized rock into an art form. The man from the Small Isles, Johnny Lynch – here in the form of The Pictish Trail – quickly got the measure of his target audience by changing the words of Beck’s ‘Asshole’ into Bumhole. After an hilarious vignette of his 30-second songs, Lynch was joined by the Glaswegian band Tuff Love from the Scottish independent label Lost Map Records. Together they enmeshed the elements of melody and melancholy; ‘Winter Home Disco’ and the concluding ‘The Handstand Crowd’ were breathtaking.

With their effervescent, twinkling, lo-fi surf rock, Hinds brought some of their Madrid sunshine to this part of North Yorkshire. But by the time that Dutch Uncles replaced them on the main stage an hour later, the blue skies had turn grey and the heavens had opened. Inclement weather, though, did not douse the Manchester band’s flames. Singer Duncan Wallis proclaimed that “we like the 80s and some proggy stuff”and much as that combination may alarm many, it was an amalgam that strangely worked.

In between times Menace Beach, under the canvas of the In The Dock stage had put in what was surely their best performance in years, marrying ease and fluency to their unquestionable muscular power. Lead singer and guitarist Ryan Needham’s Jumbo Records’ T-shirt revealed the identity of their Leeds’ base, but a band from the self-same city who needed absolutely no introduction a few hours later were The Wedding Present. Having played the inaugural Deer Shed festival back in 2010 when it had started life as a single day and night event, they were lauded like returning heroes. Listening to them here it would be no exaggeration to say that David Gedge had developed the template in the mid-eighties for much indie music that was to follow, albeit one drawn from a much darker, more forlorn hue.

John Grant‘s life story is not one that you would find in any conventional children’s fairy tale, unless of course it was portrayed within the blood and horror of one by the brothers Grimm. He has suffered greatly at the hands of heartbreak, homophobic discrimination, depression and drug addiction. He may not, on paper, be an easy fit for Deer Shed. But his headlining appearance on Saturday night shows that the festival organisers are stretching the boundaries of their booking policy and their bravery is rewarded by a set that is as compelling as it is uncompromising.

Once the last strains of ‘Happy Birthday’ die down – in recognition of Grant’s 48th on that very day – he roared into ‘Marz’ and took us off on a huge, fabulous journey. Everything about John Grant is big; his physical presence; his magnificent sonorous voice; and the tortured anguish of his songs. We get ‘GMF’, ‘Jesus Hates Faggots’ and ‘Hate This Town’, none of which make any concession to this particular festival crowd. You just have to stand back and admire this huge man from Parker, Colorado.

Sunday arrived relatively becalmed and Rozi Plain captured that mood. She brought a lovely breath of fresh air onto the Lodge Stage at lunchtime with a beautiful clutch of songs – ‘Actually’ and ‘Catch Up’ will linger long in the memory – where intimacy and intrigue rubbed shoulders with an almost child-like wonder.

Seafret comprise singer Jack Sedman and guitarist Harry Draper. They may be more familiar with the coastal paths of the East Riding of Yorkshire but with Sedman’s passing resemblance to a young Art Garfunkel and a voice eerily redolent of Jeff Buckley, this impressive duo’s heart would seem to lie in America. Their set early Sunday afternoon packed a big emotional punch, something that could just as equally be said about Emmy The Great; she created a most charming and allusive world that stretched way beyond most conventional singer-songwriter narratives.

As the clouds started to gather, and before The Unthanks bade farewell to Deer Shed 6, Ibibio Sound Machine set the place alight. Coming out of London by way of Africa, the eight-piece band proved to be an absolute revelation with a supreme fusion of funky Afro-beats, electronics, horns, disco, gospel and guitar. The Nigerian-British vocalist Eno Williams was a blur of charismatic movement. She radiated immense warmth and with Ibibio Sound Machine charging ever forwards managed to create the most improbable of party atmospheres you could possibly imagine in a wet field in northern England on a Sunday afternoon in July.

During his interview on Saturday, Billy Bragg had spoken knowledgeably about the role of music as a social medium and its ability to bring people together. And it is with this spirit of inclusion that Deer Shed has managed to develop the festival and move it forward making it into the undoubted success that is has become today. Any changes that have been made – for example, in broadening the reach of its musical arm – have been gradual and achieved without losing either the event’s fundamental sense of integrity or sight of its core audience.

More photos from Deer Shed 6 can be found here