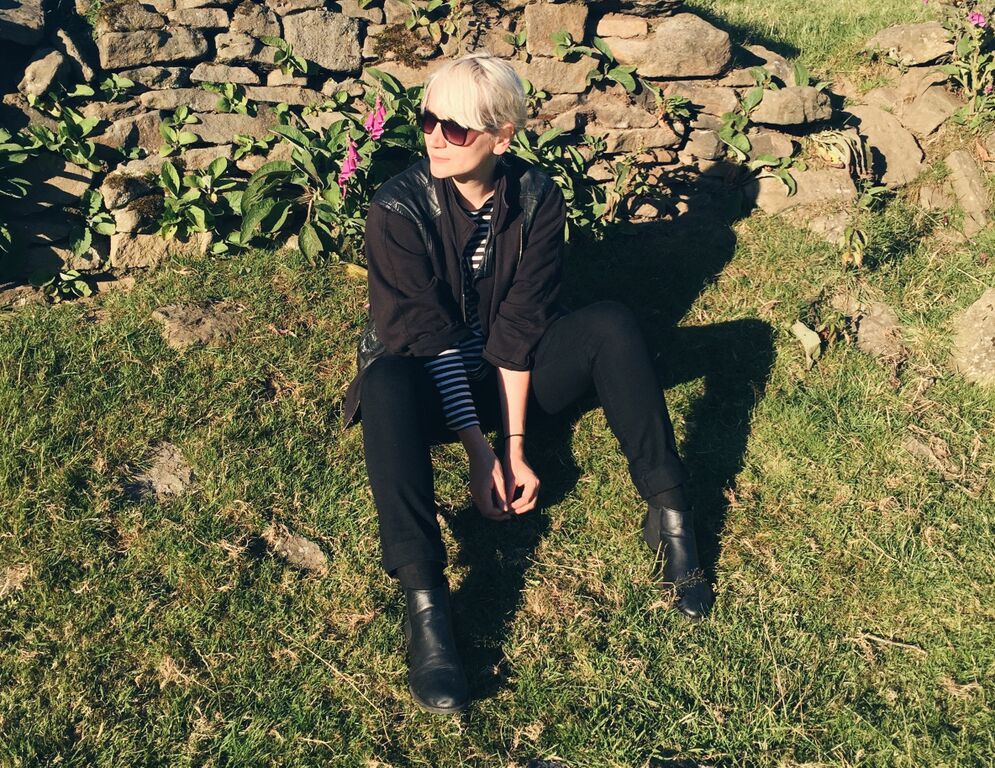 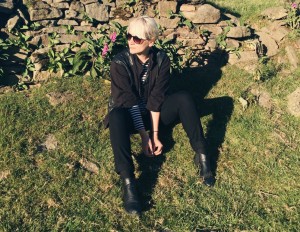 Katie Harkin has been the frontwoman of Leeds’ three-piece Sky Larkin since the band’s inception in 2005. Earlier this year she was recruited by the returning indie legends Sleater-Kinney as their touring fourth member. With both bands taking a break, though, she has recently launched her own solo career. Katie Harkin explained all when God Is In The TV caught up with her earlier on this week.

GIITTV: I guess most people will associate you with working with bands – Sky Larkin obviously, and then there is your past involvement with Wild Beasts and Sleater-Kinney too – but I wonder if I could start off by asking you about your new solo outing and how that came about?

KH: It’s something I’ve been protective of for a while. I knew I wanted to keep making music after Sky Larkin wound down, but I was in no rush to frame it. It’s something that I’ve been brewing privately, then when Sleater-Kinney were due to take a hiatus over the summer to focus on other projects, I booked a tour to force my hand. I had to finish the songs if I was going to perform them! It’s been a treat to play them live with no real plans or solid intentions looming; it’s felt raw and freeing. They can mutate or solidify naturally. I owe Torres a great debt for the opportunity.

GIITTV: Your first single is ‘National Anthem of Nowhere’ – produced by Jeff T. Smith of Juffage. Can you tell us a little bit about the new record and your involvement with Jeff?

KH: I saw Jeff play what I have subsequently realised was his first gig here after moving from the States at The Brudenell, and have been a fan ever since. I was invited to be part of his Sonic Cauldron ensemble for a one-off performance where we played within a circular PA system Jeff built and wrote a computer program to control. The audience were invited to move around the space to sounds that attracted them, a fun alternative to static gig viewing. He has an incredible musical fluency and infectious creative ambition; he’s a great collaborator and recording ‘National Anthem of Nowhere’ with him felt like a natural choice.

GIITTV: I am aware that a portion of your proceeds from the new record is going to Sensory Leeds – a local not-for-profit organisation that is committed to providing the highest quality sensory experiences for their service users – can you tell us about your connection with them?

KH: My friend Meadow founded Sensory Leeds and to see her hard work have a very real impact on so many lives has been awe inspiring. Sky Larkin used to rehearse in the building and we’d see a very small part of what goes into her day-to-day running of the place, she’s a local hero for sure.

GIITTV: I only knew about Sensory Leeds from what you had said about them when you recently played support to Natalie Prass at the Brudenell Social Club (just round the corner from their building at Headingley train station). I had seen you before at the Brudenell with Sky Larkin (in September 2013) but wondered what it was like playing there on your own?

KH: The Brudenell is the centre of my musical universe, and responsible for so many unforgettable moments in my life that playing there feels simultaneously like playing in my own living room and the most prestigious podium possible. Plus, meeting Natalie and her band was such a treat; as a live band they’re that magic combo of accomplished and inviting.

GIITTV: What was it like playing with Natalie Prass?

GIITTV: Going back to the Brudenell, am I right in thinking that you once lived just behind there?

KH: I did indeed. Like pretty much every musician in Leeds (and Henry Rollins) I once lived in The Harolds. Those basements are fertile beyond belief.

GIITTV: I believe you are now living in the Peak District? Was that a big change for you?

KH: There’s a sparse, tough beauty to the Peaks that I’m in love with. I’ve never felt more at home within a landscape. It’s remote, but it balances and complements the time I spend in close proximity to lots of people whilst touring.

GIITTV: Returning to the new single, it is one side of the very first 7” single to be released by the new Leeds record label Come Play With Me (the other side being Cinerama’s live version of ‘The Girl From The DDR’) – can you tell us how you came to get involved with this new project?

KH: I’d been trying to think of a way to support Sensory Leeds, so when Tony approached me with the idea for a label with a local focus it seemed like a perfect fit.

GIITTV: I know you are out on tour just now supporting Torres, but will you be able to get along to the Come Play With Me launch event*?

KH: I’m afraid I’ll still be on the road!

GIITTV: And, finally, what does the future hold for you?

*Come Play With Me’s special launch event will be held at Sheaf Street Studios in Leeds on Thursday 24th September 2015 featuring an interview with David Gedge, along with stripped down sets from:

A limited number of tickets for this event are available from Jumbo Records in Leeds.