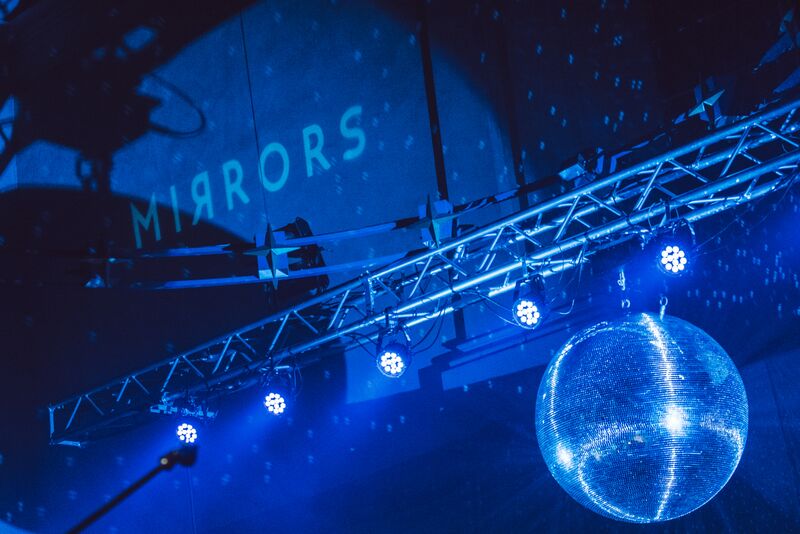 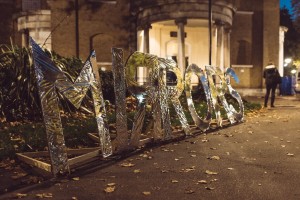 Is it that it’s a post-payday Saturday? Or is it that we’re attending this event on the night of the undead dickheads – Hallowe’en? Surely it can’t just be “a London thing”? There must be a reason why Michael Milosh, vocalist of co-headliners Rhye, feels the need to delay beginning the lyric of set closer ‘Open’ until the crowd at St. John’s Church are able to stop their endless, inane chatter. It’s a microcosm moment that speaks to the general tone of the day; a struggle for fans to hear music in these beautiful surrounds; a tight-lipped effort for artists to be heard.

Set among a triumvirate of unique venues – former railway station turned venue/club Oslo, the aforementioned St. John’s and, edging up towards Clapton, Hackney Round Chapel – the inaugural Mirrors festival is a bold, interesting conceit that tethers a myriad of musical genres to intimate venues all within a cold stroll of one another as well as offering easy access to the cold beer section of Sainsbury’s.

With Cloves offering a brief, beauteous set early on at Oslo, we get a tingle from Australian Kaity Dunstan’s high, sad vocal and the minimal, precise backing of her band. Single ‘Everybody’s Son’ is a largely acoustic lament that shudders and tears beautifully – yet is lost among the rising volume of gig-goer talk. Though Dunstan professes exhaustion after a trip from Manchester, the band stay positive through the racket and leave a soft but lasting memory of tremulous melody.

Following a lounge in the park, we dip into Alex Burey back at the same venue. A couple of tunes, one augmented plentifully by some kinda incongruous wailing guitar solo, are enough to assure us that, despite his Scott Walker mood and melancholic tone, in a live setting his bedroom friendly songs are more tiring than tender – a touch too bluntly delivered to do the delicate material justice. 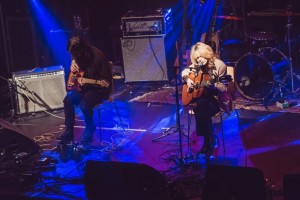 By 6.45pm, a touch of drunkenness has sparked the growing crowd and we’re treated to the rare talent of Jessica Pratt over at St. John’s. The San Franciscan lo-fi lord of ambient folk (among other disparate genres) conjures an atmosphere of low, scratched out eeriness – her music like a peek into a previously unopened diary filled with longhand and vague, blurred illustration. Her mesmeric voice brings songs like ‘Central Park’ and ‘On Your Own Love Again’ a strange, compelling combination of taut, muscular strength and ethereal otherness. When left unaccompanied by her guitarist for her closing songs the power of her work feels even more concentrated and, conversely, ever more tender. That many here have conversed good and loud over her pin-drop set doesn’t take away from the fact that for the hundred or so fans glued to her every note at the front of the stage, Pratt is, simply put, sublime.

Dream Wife are more readily equipped to battle the “banter”. Armed with Bella and Alice’s fuzz-guitar and punk-bass, a back to basics drum machine and Rakel’s taunting, teasing, sometimes screaming vocal they are a mirrorball party in full swing, coloured by swathes of Lynchian strange and proto-pop purity. The Brighton-based band have been garnering plenty of positivity in the press over the last few months and it’s entirely justified. They excite and enthrall – twisting art into rock ‘n’ roll then turning it back on its head once more before giving you the finger and a massive grin. The loudness, the joyousness and the snap-shut intelligence of the band are plastered in day-glo across the room and our appetite for forward thinking, backward glancing fun is both sated and grown by their performance. They could, and perhaps should, be your new favourite band.

A little later Pixx brings her 4AD signed sounds to the Oslo stage. Suitably dreamlike and strewn with strands of longing and loss this is sonically wonderful – yet despite Hannah Rodgers’ drifting delivery and the Grimes-like soundscape the set seems to be lacking a little in melody and definition. Perhaps a sound issue, maybe a song issue but, following on from the maniac plunder of Dream Wife, this feels a touch underwhelming. 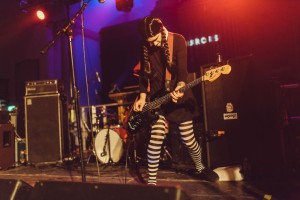 Over the Chapel we find The Wytches in extremely fancy fancy dress (Evil Knievel, Wednesday Addams and, maybe a chicken if you’re interested) and intent on fire-fucking their way through a set of 90s inspired punk rock (let’s just call it grunge and be done with it, ok?) that veers between thundering brilliance and, er, loads more thundering brilliance. They tear tunes from their debut LP ‘Annabel Dream Reader’ with blinding abandon and willful, teeth-grinding power, singer/guitarist Kristian Bell’s throat-fuck vocals howling madly over every supercharged, sometimes drugged down, chord change. They play recklessly, excellently and with that cross-hearted combination of slackness and arrogance that you used to find in, fuck it, let’s just say it, Nirvana. Yikes.

So we’re back to Rhye and their set of intricate, glimmering soul. Milosh’s androgynous vocals span out across lakes of shimmering instrumentation; soft, subtle and, as we mentioned at the start, somewhat spoiled by a packed room that, despite greeting the band with something of a hero’s welcome, quickly return to their pints and patter, punters deciding their need to be heard over the music is greater than the need to hear the music they have paid to see. 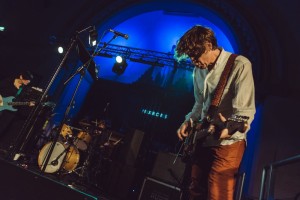 Lastly, we’ve got Thurston Moore and his experimental rock and/or roll band. They thrash it out as expected, guiding us through the dips and tunnels, the pauses, swells and wave-break explosions that have typified Moore’s work over the years. Yet, in watching Moore turn experimentalism into showmanship, striking a trad rock pose and leaning out into the adoring crowd, returning to his music stand to gleam lyrics and then pounding some beers we can see that this is more a cabaret version of what once was; a safe, comforting take on what used to feel vital, dangerous, even violent.

Mirrors, then, is a great idea for a festival. They put on some awesome talent, treat their clientele extremely well and selected ideal venues for a special event like this. We hope to see it return next year in full glory – let’s just hope the chatting casuals are able to find a nearby bar in which to talk pointlessly and loudly for hours, where it won’t detract from the experience of the fans or the musicians themselves.