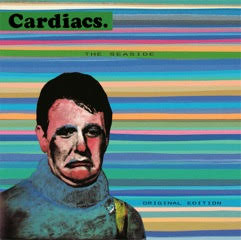 Ah, The Cardiacs, the original sore thumbs – erratic, eccentric and deeply essential, they defy categorisation; some have tried, most have failed – to some they are the saviours of progressive rock, some prefer references to psych’s more kaleidoscopic daubing while to others they are wilfully wired alchemists of art pop. In truth, they are orphans without a generic home, melodic magpies feeding on the best bits of others chewing up the disparate ingredients and chucking them into a hulking hot setting spin dryer on a programme that refuses to finish until all the contents have bled, blurred and become anew.

In truth I blame The Pretty Things’ ‘Defecting Grey’ – not wishing to demean the precociously skewed craft at work, there’s a sense that leads one to suspect that head Cardiac Tim Smith might well have frazzled and fried his headspace on contact with this gem and a result emerged from the experience somewhat better for it, albeit now blessed with a slightly off set and schizoid view of the world.

2015 saw a complete vinyl outing for 1984’s acclaimed ‘The Seaside’. Originally appearing on cassette, in some respects it perhaps provides the classic Cardiacs blue print/template, a schizoid offering that sounds as freshly skedaddled today as it did over thirty years ago, a collection that marked shifts in personnel (Cawthra going, Drake arriving) and a release that for various reasons (often strangely given – destroyed tapes etc) has never received a full vinyl or CD release (earlier outings omitted cuts and re-arranged track listings). Finally it arrived at the end of November, lavishly pressed on both CD and wax (double vinyl) variants, the recordings taken straight from the original masters tapes restored to their tracking whilst for the serious Cardiac head in your family there’s a bulging box set in which all manner of goodies are to be found, such as walker prints, newsletters, lyric and photo books, a poster and the cassette. Frankly they are spoiling us.

‘The Seaside’ itself is a kaleidoscopic action painting, skittish, nonsensical, oft barking and always playful, a place that finds Cardiacs at their most skewed and impishly deranged peering from out of the spout of a tea pot secretly hidden in a hidey hole lushly smothered in English psych peculiarity, a warping opera through whose viewfinder the aforementioned Pretty Things run riot with Devo, the Fire Engines, Pink Fairies, Gong and the Purple Gang.

Amid these grooves, a tensely theatrical high wiring carnival unfolds, riddled by the acute turn of obtusely seesawing time signatures all threaded intricately and occasioned by the liberal trimming of goonery and lunacy, as encountered on the surreal nursery rhymed bandstand shanty ‘A Little Man And A House’ and a frenetic urgency as serviced by the Wire on sulphates, like hypertensive ‘Nurses Whispering Verses’ or the disfiguring clownery funfair of ‘It’s A Lovely Day’.

Elsewhere, Smith and Co’s most famously well known moment – ‘Is This The Life’ lurks and finds them almost kowtowing to the rule book kissed in scarring riffola, a darkly forlorn rapture oozed in a quietly knowing majesty that hints of a youthful Cure before the gloom in a face-off with a Magazine at the height of their fracturing paranoia powers. Somewhere else the frankly fried and manically maddening ‘Jibber And Twitch’ skitters, stutters, chuckles and charges with insanely affectionate alarm, managing to shoehorn not so much the kitchen sink but a whole shop unit’s worth of household fare into its warping waywardness. Lest we omit to mention ‘Gena Lolla Brigida’ a brass belching bonkers brigade of speed freaking soul boy wilfulness that’s only outshone in freak pop stakes by the fraying dementia of ‘Mr Sparrow’ – a glorious slab of bizarro non pop that manages to melt the melodic heads of Adam and the Ants ‘Dirk Wears White Sox’ and weld them onto James Chance and the Contortions. For all its peculiarity, ultimately it’s pop, just not the kind of pop you might expect or want. The nations saving grace anyone?