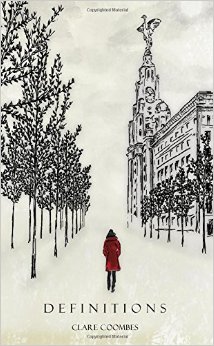 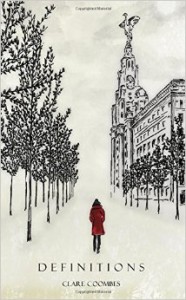 ‘Definitions’ is a Liverpool-set mystery-thriller by debut author Clare Coombes. Charley’s sister Gina has gone missing, after a turbulent relationship with controlling boyfriend Daniel. Though Charley is convinced Gina has been kidnapped, the police are disinterested, so Charley begins looking for Gina herself, with her only source of information coming from a series of ‘defintions’, pieces of paper with cryptic sentences, that Gina has left behind. Her determination is fuelled by a desire to put right her own difficult relationship with her sister who, following the death of their mother years before, and their father having emigrated, is all Charley has left. As well as police indifference, Charley also has to battle against Daniel’s violent and complex family.

This is a hugely assured debut novel that skilfully jumps between third person narrative and Gina’s point of view . All characters are believable and real, with Charley’s own dark past gradually emerging as her search for her sister begins to take its emotional toll on her.

The thriller elements of this novel are superbly handled, giving the novel a feel of Gillian Flynn‘s mega-hit ‘Gone Girl’, but what impressed me most was the subtle dissection of Scouse family mores, which at times reminded me of Jonathan Franzen. The fact that Coombes is able to do this without once letting the tension drop is testament to her abilities. The depiction of the scouse family, and ‘tropical fish’ (Gina’s term for a particular type of young Liverpudlian woman that will be very recognisable to anyone familiar with the region) is spot on, and the dialogue is authentically scouse without being exclusive to anyone unfamiliar with the lingo.

This is a debut novel with great crossover potential, which will appeal to fans of both crime fiction and literary fiction, which is no easy thing to pull off. Coombes is clearly a writer to watch.