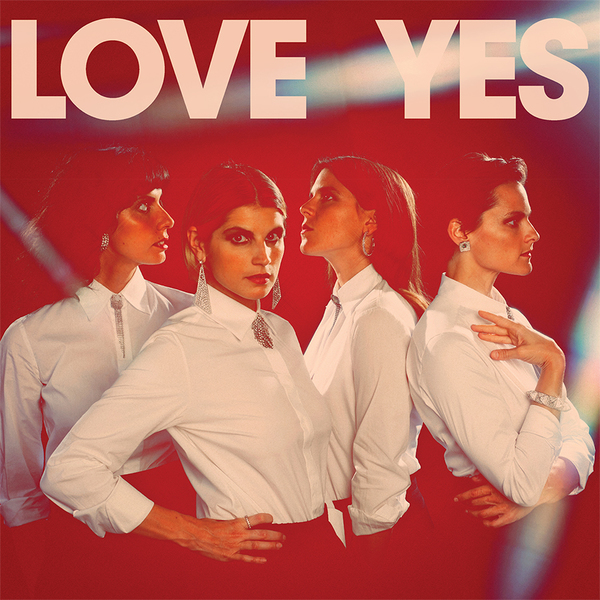 Note to self. When researching a band on t’internet never, ever put ‘teen’ and ‘love yes’ into your search engine of choice unless you want your wife to ask you some pretty searching questions about your browsing history. Teen the band are no strangers themselves to the problems associated with modern relationships, so much so that Love Yes is their third album detailing their innermost thoughts on the tribulations of dealing with the opposite sex. Reviewing this on Valentine’s Day, as I am, feels somewhat shameful.

Teen have been with us a while now, as far back as late 2012 as the London Olympics faded into memory, The Guardian were already tipping the all-female four piece as ones to watch, citing them as “freak-out music meets folk, without being freak-folk”. Helpful eh? In the intervening three years, Kristina ‘Teeny’ Lieberson and her sisters have evolved their sound to mimic that other famous sibling synth partnership, Sparks. Evolution is clearly the watch-word here as the band have progressed from their 2014 offering The Way And Color which showcased their obvious USP – the ability of the Lieberson sisters to pen some deep, introspective lyrics.

However, whereas their last album was a sparkling foray into the world through the eyes of female empowerment, their follow-up all too frequently swamps the lyrics with increasingly complex new-wave synth sounds which often seem at odds with the content. Oh…and for some reason they throw in the occasional blast of sax to close out a track further creating the impression that the kitchen sink isn’t too far away.  The vocal style of Katrina Lieberson appears to be changing too. Gone is the simple and stark delivery of the past to be replaced by a high falsetto which only serves to muddy the overall message yet further.

‘Tokyo’ opens the album with a delicious pop hook conjuring up images of a wronged woman fed up with the relentless failings of her partner before moving through the gears to challenge and chastise male dominance in tracks such as ‘Another Man’s Woman’ and ‘Gone For Good‘. As ever with Teen, there’s a real intelligence at play here, a desire to separate themselves from the mainstream pop circus and offer up a cerebral alternative that doesn’t just mirror Goldfrapp although on first listen you could be mistaken.

My only wish is that Teen would have the confidence to let their music breathe a little. Instead they come across as synth nerds with a lot of new gadgets to try, ‘Animal’ for example, starts with a sound that can only be described as a seven-year old with a stylophone.

But when they get it right, as with the lament to their late father on ‘Please’, the effect is dramatic. “What kind of woman did you think that I could be” implores Teeny and its touch and go as to whether my heart breaks before hers.

We need Teen for the good of our souls but please, when it comes to new wave bombast then less is more. They have an impressive message to broadcast on Love Yes, but Teen need to let us hear it.

Love Yes is released on Feb 19th 2016 on Carpark Records