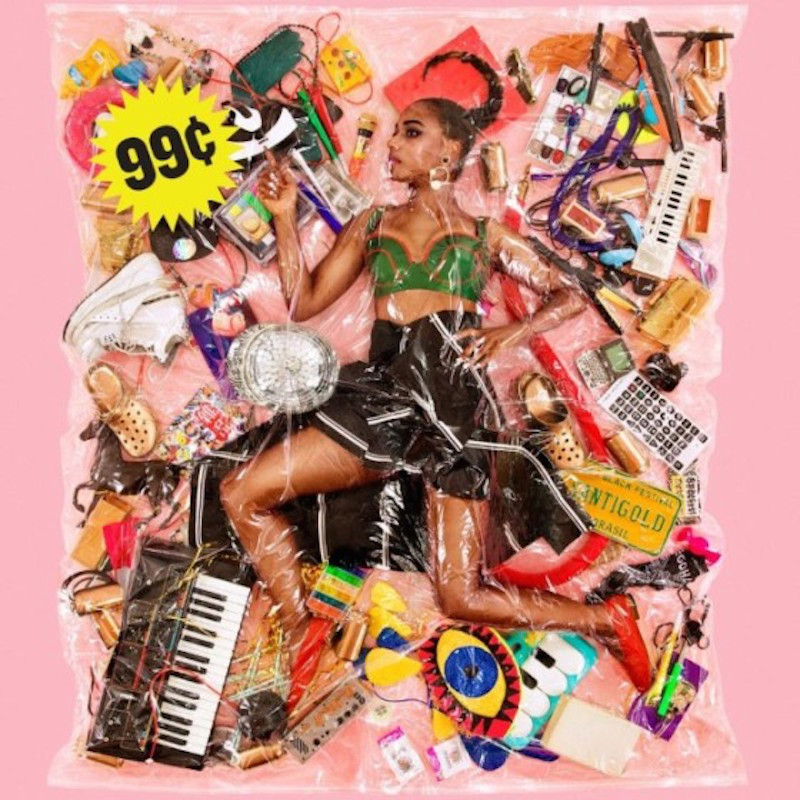 Santigold returns with her third album, 99¢, following 2012’s under appreciated, Master Of Make Believe. With her second album, she shed some of the new wave influences that made her debut album refreshing and came back with a record that despite its quality often sounded like she was having an identity crisis, split between mellow yearning pop and hip-hop influences. 99¢ takes even more of a scattershot approach, yielding mixed results.

All the singles released from 99¢ have been under the radar, including, most surprisingly, the addictive first single, ‘Can’t Get Enough of Myself’. It sounds like Gwen Stefani fronting Tom Tom Club and is as technicolour as the artwork for this album. Santigold brims with self-confidence as she sings, “I can’t get enough of myself” in the chorus. The hyperactive ‘Banshee’ sounds like a great lost single from ZE Records. It’s surprising that songs as eager to please as these didn’t catch on, but if 2012’s masterful, ‘Disparate Youth’ couldn’t get in the charts, there’s not much hope for Santigold as a commercial prospect at this stage.

99¢ peaks with ‘Chasing Shadows’ which is as swoonsome and carefree as some of her previous career highlights: ‘I’m a Lady’ and ‘The Keepers’. It was co-written with Rostam Batmanglij from Vampire Weekend, which explains why it has a similar feel to Charli XCX’s amazing, ‘Need ur Love’. ‘Walking In a Circle’ has a deep electro bassline and eerie vocals that sound like her successfully attempting to emulate The Knife.

After a strong and colourful start, the second half starts to drag. Following the excellent glossy 80’s synth pop sheen of ‘Rendezvous Girl’, the songs blend into each other, leaving little impression. ‘Before the Fire’ and ‘Run the Races’ recall the understated highlights from Master of Make Believe (‘The Riot’s Gone’, ‘This Isn’t Our Parade’) but without the hooks that made those slow-burning successes. Often Santigold takes inspiration from other artists and keeps her own style, however on ‘Outside the War’ her Siouxsie & The Banshees impression is too obvious and becomes awkward.

99¢ ends with ‘Who I Thought You Were’ which sounds like something from Cyndi Lauper’s classic She’s So Unusual album blended with the Go-Go’s. It’s a welcome callback to some of the same influences on her debut. 99¢ ending on such a high makes the flaws of the second half even more obvious.

Hopping around genres worked in the past for Santigold but it’s not as convincing here and ultimately makes 99¢ an uneven record. Charli XCX’s album, Sucker, is a better example of proper execution of a new wave pop album — because she commits to the role. There are songs here that show Santigold has talent and that one day she’s going to have a fantastic singles compilation. It’s disappointing as her first album suggested she might be a brilliant albums act too. Santigold needs more of the self-confidence she displays on Can’t Get Enough Of Myself and to deliver on the promise she showed in 2008.