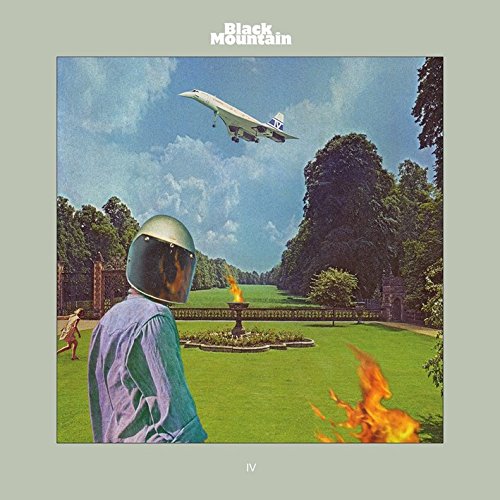 It’s been six years since Vancouver rockers Black Mountain released their last, Polaris Prize-nominated album Wilderness Heart in 2010.  In that time there’s been little from them other than a soundtrack in 2012 for post-apocalyptic surf movie Year Zero but that’s probably because they were working on trying to make a juggernaut of a record.  Even keyboardist Jeremy Schmidt claims that the band were “toying with the idea of calling the album Our Strongest Material to Date.”  That’s only partially true though, as while their latest effort IV does have some hefty moments, it’s often a bit of a meandering slog.

It all starts off quite promisingly.  ‘Mothers of the Sun’ might be eight and a half minutes long but it doesn’t feel like it.  For a while it creeps along with slightly menacing woodwind and a nagging electronic bleep, only to explode into an orgy of heavy guitar riffs and heart-pounding bass; the influence of King Crimson is obvious here, especially when the melodies resemble an even more twisted version of ’21st Century Schizoid Man.’  It’s followed by ‘Florian Saucer Attack,’ in which vocalist Amber Webber channels her inner Siouxsie Sioux and yells over a furious squall of electronic guitars and futuristic synths whose energy is almost ridiculously infectious.  Webber proves to be the highlight of the album, holding the relatively disparate tracks together while also providing some real emotional weight to songs like ‘Line Them All Up.’

But there are just too many times where IV gets bogged down, tedious and sometimes borders on the cliché.  ‘Defector’ has a warbling riff that Jimi Hendrix might be proud of and some nice electronics that hark back to Kraftwerk in the bridge, but it also has some pretty cringe-worthy lines (“I don’t believe in suicide/ Rock’n’roll’s contagious smile”).  The band appear to try to replicate the success of ‘Florian Saucer Attack’ on ‘Constellations’ but instead end up with a forgettable mix of repetitive riffs.  You’d never know that Sunn O))) producer Randall Dunn had worked on the LP during lightweight moments like this.  If you’re looking for a pop song then ‘Cemetery Breeding’ is the closest you’ll get, but its dramatic, gothic tale is also undermined by unavoidable, juvenile platitudes about “fucking in the graveyard.”  Closer ‘Space to Bakersfield’ is said to be inspired by Funkadelic’s iconic ‘Maggot Brain’ but instead of channelling the soulful and mournful guitar licks of Eddie Hazel, it feels more like a rambling ten-minute outtake from a Steve Mason album.  It’s especially hard to sit through when it comes after ‘Crucify Me,’ which already sounds like an album closer.

IV does have its moments, and when they do come, they’re often euphoric, sonically ambitious and, perhaps most importantly, linger in the memory.  It’s just a shame that these flashes of brilliance are so few and far between.