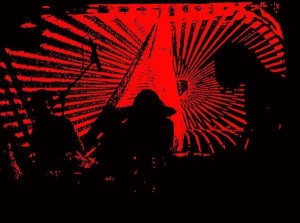 And so the prog rock renaissance marches ever onwards…or does it? Well, as it turns out in the case of this album by Gnod, no, for though that descriptor was heard used to describe this Salford four piece, this is far closer to abrasive Krautrock in all its squelchy, tripped-out glory. It may be a full album that consists of just three tracks but goblins there are none. Dubbed out basslines there are plenty, roaming around in particularly speaker-rattling glory in the opener ‘The Mirror‘.

There’s also metallic scrapes, discordant melodies and an overall uncompromising antagonism that brings to mind PiL and even parts of Captain Beefheart when he wasn’t in full on bonkers mode. It’s psychedelic but not any flowers in your hair (non)sense; if you go down the rabbit hole being sound-tracked by this baby, you better be headstrong. Second track ‘Learn To Forgive‘ even channels a touch of Swans hefty swamp-funk. The power coming out of the brooding menace suggests a formidable proposition live. Ironically, an entirely unforgiving one at that.

Formed in 2006 the band has been through several line-up changes and indeed musical ones. Dread word ‘experimental’ but hey, why the hell not? Most recently Infinity Machines from 2015 had a far more beat-driven sound with, dare one say it, even some jazz influences. Squealing, wailing, nuts jazz of course, but it’s there. Mirror is a far more primal, raw effort. Lyrically it seems to explore harsh emotions like rage and frustration – though the vocals sit low in the mix – which find mirror in the melodic but harsh as can be guitars. It’s hypnotic…but you know it ain’t good.

Which of course means, it is. It’s excellent, scary and pretty unique in the current landscape. It’s a look into a Kafkaesque world of frustration and struggle with every growl, clang and shard of sound you could want. It sounds like Hell should. Perhaps the Devil really does have the best tunes.

Epic closer ‘Sodom and Gomorrah‘ – 18 minutes, count ’em – sounds like man’s struggle against the dying of the light; if the light had been sucked into a black hole leaving only rattling reverb and echoing vocals. Flowery prose for a defiantly unflowery record. Indeed it breaks down into some of the most pleasingly nihilistic music heard in a long time. As nasty and malevolent as you like; stripped back to its elements – guitars, drums, voice pull themselves about in every clench-jawed direction.