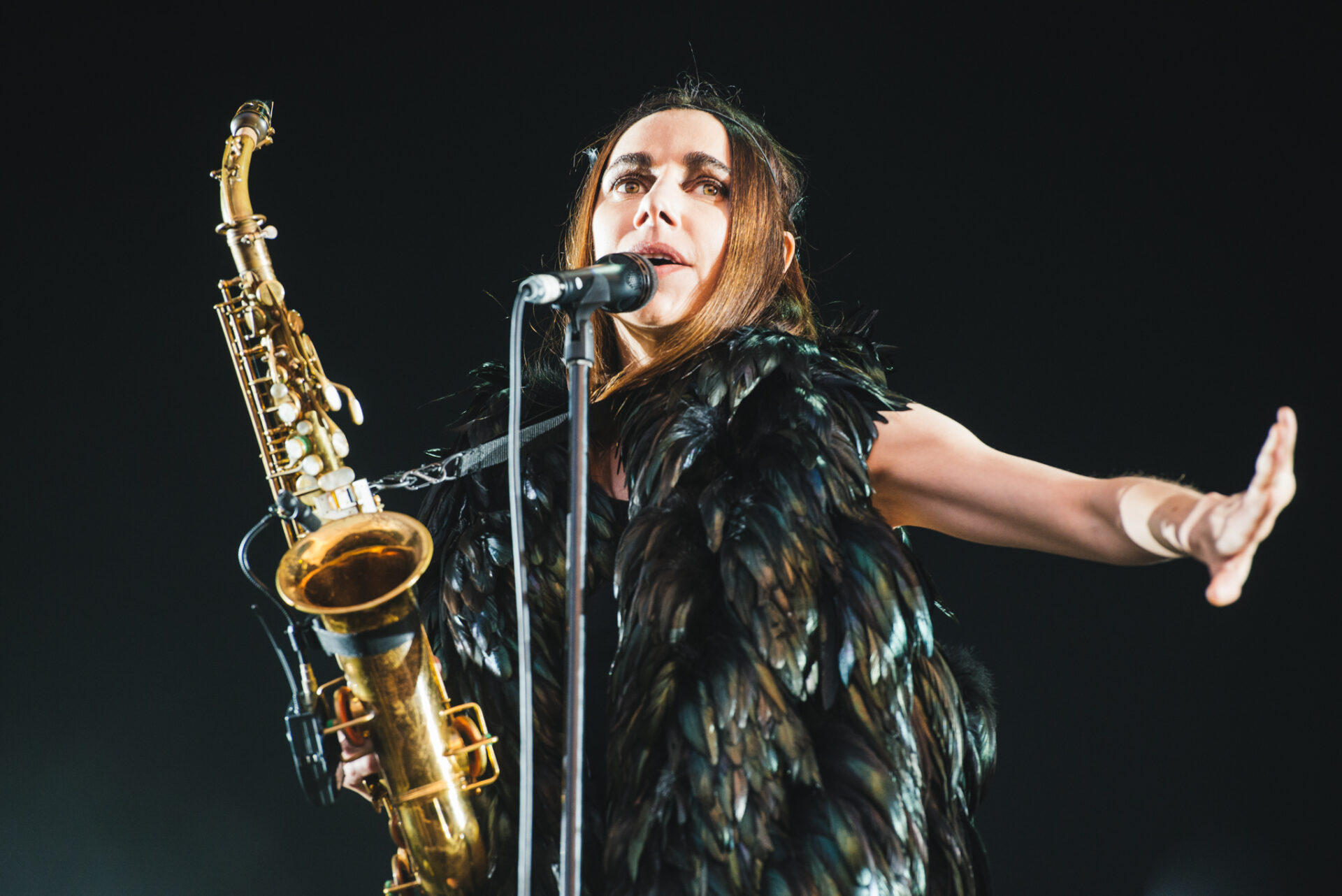 Back and bigger than ever, Field Day continues to go from strength to strength, priding itself on displaying cutting edge talent with a ‘village mentality’ in the heart of London’s Victoria Park.  Although this year’s event didn’t quite get to the sold out finishing line, the bill marked a more diverse array of acts than ever before, with a new young favourite in James Blake and renowned professional of the musical dark arts PJ Harvey as headliners.  With the Saturday off to a soggy start, it was clear that spirits were not to be dampened, even if much like most sports days at school many of the egg and spoon races were called off as hay bales disintegrated in water-logged fields!  In fact, there were so many musical acts to choose from; the problem came only with trying to negotiate which to forego.  The weekend was a delicate balancing act of clashing bands and many audience members couldn’t help feeling left slightly hungry from the fact that they could not always have their cake and eat a slice of someone else’s too!

Let’s Eat Grandma performing at the Moth stage was a moody introduction to Saturday afternoon.  With their patty cake hand clapping and chanting in unison they were redolent of layered banshee voices haunting the background of some early Kubrick movie.  This Halloween school disco soundtrack was composed by Rosa and Jenny, a teenage duo from Norfolk who are life-long, long-locked best friends. They create pop that, like Field Day festival as a whole, draws you in to unexpected dark corners where you find yourself relishing each unexpected sound.  Stumbling upon the constant contrasts of this and other acts was a fun reward for the effort of squelching about in ill-prepared footwear between stages.

Singing unhindered by cascading rainfall on Saturday afternoon was poetic Welsh maestro Meilyr Jones playing in the Shackwell Arms tent.  Indeed, he aptly crooned “when it rains here, it really rains” performing ‘Strange Emotional’ from his debut album ‘2013’.  The album marks an emotional journey through the cityscape of Rome and is at once both acutely personal and widely relatable in its frankness and skilful musicianship.  Meilyr seemed to take great pleasure in surprising the bedraggled crowd by wriggling around like a dervish and climbing onto the railings in the crescendo of his penultimate song to give a dramatic introduction to his backing band.

Braving the elements, Skepta stepped up to represent the UK Grime scene.  Harsh lyrics encouraged a very different sort of audience participation.  At times the anger felt by certain sections of the crowd felt visceral and seemed to confirm that the main festival action was happening away from the main stage.  Tottenham rapper Joseph Junior Adenuga was raring to go, with his main stage placing confirming the recent surge in the UK grime scene and particular adoration for it in the capital.  However, performing immediately after the most extreme downpour of the weekend had its audio setbacks and the mixing on his set certainly didn’t help.

Despite some hazardous sound glitches thoughout, Field Day remained a sensual feast and visuals of many performances added to proceedings in a most ethereal manner.  Promoters Eat Your Own Ears provided the space and scope for main acts to get creative with their stage presence.  From Yeasayer’s cardboard spacemen cutouts to James Blake’s fantastic eclipsing moon light show, much of it had a certain new-age space feel.  Perhaps electronic extra-terrestrials Air could have used more of this for their somewhat minimalist set that didn’t pack an audio-visual punch as we might have hoped.

When the sun did come out, the delightful array of street food and drink could be enjoyed to its full potential.  With craft beer pints fetching the same price as lukewarm cans of Red Stripe, it was a no brainer to go to the smaller sampling tents of the independent good stuff.  Frontier ales had to be a winner.  Enjoyed with a cheese and marmite designer crumpet, you were quite literally golden!

Moving back in to the murky tents, UK Hip hop deity Roots Manuva also had a technical cropper.  With smoke machines on overdrive, the audience was obscured from seeing the p stage for most of the show.  Was it a deliberate act of elusiveness?  Most things about the set were unclear from a visual perspective but the music held its own and the tunes prevailed through the fog.  With his latest album Bleeds being released at the end of last year, Rodney Smith has gone by many names over the years under his Big Dada label.  He continues to impress a modern audience as Roots Manuva with interesting collaborations and an unhindering experimental approach.

It was good to see a constant dichotomy of new acts and revived old favourites.  Two examples of the latter on Sunday were Mystery Jets and Air.  It was a return to nostalgia for many going to see them.  Mystery Jets got off to a somewhat slow start and verged on predictable for the first half of their set. However, things started gaining momentum when the band started playing their latest album The Curve of The Earth.  In contract, Air began strong and remained effortlessly effete as only two French sophisticates can.  Their music continues to propel well above the stratosphere and deliver universal pop with a Versailles touch of class.  It seemed sacrilegious to have to abandon Nicolas Godin and Jean Benoit-Dunckel early to go see Polly, but then as they say, c’est la vie.

For unbridled audience joy and gig atmosphere, several acts proved to be happy festival discoveries.  Firstly, Plastician performing on the rainy Band Stand.  Chris Reed churned out happy tunes that had people gleefully frolicking about in the mud outside.  Staying firmly planted in said mud, it was also in the cavernous, puddle-filled centre of the Bugged Out tent that many a dance fan went to let loose Dusky was anther Saturday highlight.  The London duo cemented their underground reputation with a colourful array of floor fillers that made everyone feel it was summer even when the weather begged to differ.

Another success story was Tourist.  Known to his friends as Will Phillips, he’s a South East London boy who aims to rejig anthemic electronic music in to what has been described as ‘warm club-pop’.  A sense of a guy loving what he was doing and being amazed that other people actually wanted to watch him doing it was most endearing.

Finally, Avalanches were one of the highlights of the weekend as a whole.  Their relentlessly jovial notes struck a major chord in the hearts of the audience.  The Aussie masters of ‘plunderphonics’ set a real return to form, much to the delight of the crowd who seemed to hail from nearly every continent.  It was a great atmosphere and a set that really seemed to draw everyone together as much as they did in 2000 with their electronic debut Since I left You.

PJ Harvey emerged amidst the passing storm and dramatic skies of Sunday night.  Raven-clad in obsidian feathers, she stalked the audience as prey.  Utterly captivating from start to end, she teased with much of her 2011 Let England Shake album as well as her new recordings from The Hope Six Demolition Project before descending into older classics like ‘Down by the Water’ from Is This Desire. The atmosphere was electric and as she cast her spell over the crowd, one felt well and truly toiled and troubled!  Just as the Let’s Eat Grandma duo had bewitched in their freshness, so did PJ see out the festival in style as a long-reigning sorceress!  With the pathetic fallacy of the natural elements on her side and beautiful monochromatic screen close ups of her features; the visuals were as sumptuous as the sounds.  Once again, Field Day proved to all that – while we may begrudge admitting it – all the trendy dark clothes wearing musical features of London, are pretty hard to resist at times!