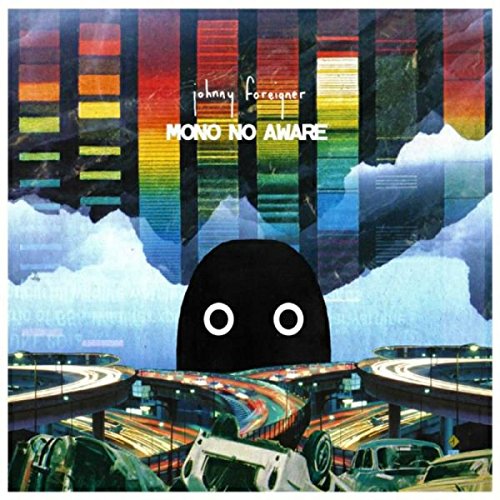 “I’ve a confession, it stings to admit/I can’t foresee a day when we buy speedboats from this/It’s lucky sadness triggers the songs”. So begins Johnny Foreigner‘s fifth album Mono No Aware. ‘Mounts Everest’ may contain this, the most typically Johnny Foreigner lyric they’ve ever written, but it’s a fragile thing, barely there with just vocals and gently strummed guitar. It sets the scene for ‘Undevastator’, that title alone demanding comparison with previous record You Can Do Better‘s closer ‘D E V A S T A T O R’. Where that song was a lament to being either “always wanting better”, Mono No Aware is a defiant record and ‘Undevastator’ the statement of intent. The triumphant chorus of “What were you waiting for?” sums up their determination and defiance in the face of awareness that they’re probably not going to get past this level of being-in-a-band.

Day jobs and toilet venues aren’t important, what’s important is that they keep trying to better themselves and remain true to themselves, plugging away writing the best songs they can and playing them to people who still care. The way the band have become, in their words, a “mostly happy, mostly functional, not completely unsuccessful, brokeass working cottage industry/mobile entertainment unit”, is the reason their fanbase is so dedicated. That and the fact that they’re still one of the best bands around, with a solidly excellent back catalogue that they, ten years into their career, are still adding to rather than resting on their proverbial laurels. And they’re still expanding on what they do as well, rather than relying on jagged guitar lines and yelping vocals (although that’s not to say Mono No Aware is without jagged guitar lines and yelping vocals, of course). ‘Our Lifestyles Incandescent’ is determinedly weird, harking back to the structure of ‘Salt Pepa and Spinderella’ from Waited Up Til It Was Light with its drum machine first half and guitar-led second half, but features bassist Kelly Southern swapping brilliantly odd vocals with Nnamdi Ogbonnaya and collapses into guitarist Alexei Berrow’s defensive shouts and coughs that “Just ’cause we don’t party like we used to don’t mean we’re not high”.

There’s a confidence and sure-footedness to Johnny Foreigner that comes from having the integrity to keep making better records, keep in touch with people who love their band. Their songs may still be about being awkward at parties, missing opportunities, general disappointment but it doesn’t matter when they’re this good. The extended version of single ‘If You Can’t Be Honest, Be Awesome’ here features an extra minute-and-a-half of heartbreaking/bursting guitar jangle that swells to a trumpet line that soars as the guitars descend. It’s the most beautiful thing that Johnny Foreigner have ever committed to record. This unconventional beauty has always been there in their music if you know where to look; there’s an unlikely romance to ‘Undevastator’‘s verse: “Are you starting to feel like your body is the land?/Chasing rivers downstream from the heart to the hand/Climbing the summit of the knots in your back/And we’ll throw away the map when we get there”. These are the reasons Johnny Foreigner are still a band. That and they’ve made the best album of the year so far.

Mono No Aware is out now on Alcopop! Records.