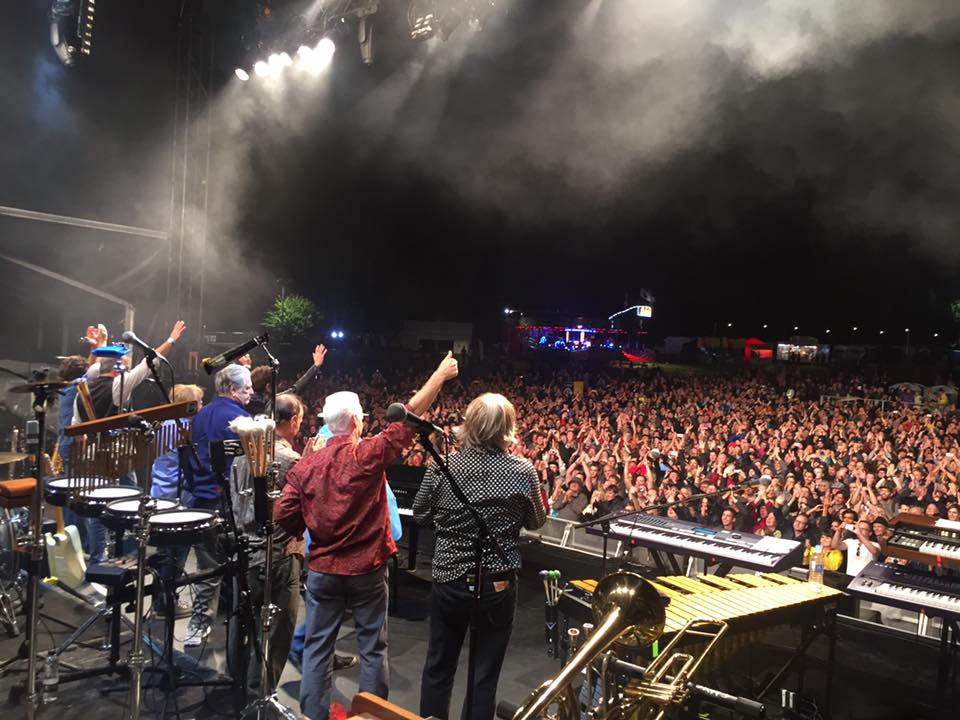 “Are you looking forward to Brian Wilson later?” a friend of mine asked as we were sitting in the last of the sun on Saturday afternoon. Until he posed me that question I hadn’t really thought about it before, but then I don’t tend to judge festivals by their headliners. I noticed I was taking a little too long to respond and then said “Oh yeah!” Like with football teams, it’s all about the balance of the side and not the marquee signings. Yes, Wilson was the main draw of the day, but if you cast your eyes to the other stages then there was plenty to get excited about.

Most of Saturday was spent at the BIMM stage, checking out a slew of hungry local bands who played out of their skins. Voodoo and the Crypts kicked things off with math-infused indie pop. Seats slowed things down a bit wither their brand of melodic rock. FUR played their last ever gig, showcasing why they’ve been compared as a mixture of the Arctic Monkeys and Brian Johnstown Massacre. Egyptian Blue closed with a barnstorming set filled with distorted guitars, screaming vocals and attitude aplomb. However, the band that stole the show was Post-Heather. This duo write songs with stark guitars, diversive drumming, soaring vocals and introspective, existential lyrics. They are slowly becoming one of the best bands on Brighton’s ever burgeoning live scene. I doubt they’ll be on the BIMM stage next year…

Over on the Concorde2 New Bands Stage, Jacko Hooper, Matthew Logan Vasquez and Max Jury showed why they’ve created such a buzz this year with sets full of relationships, heartbreaks and, ultimately, redemption. They also hinted at what to expect in the future: more introspective lyrics, soaring vocals and a penchant for denim. The main stage was geared up for Wilson’s rendition of Pet Sounds. Natty delivered a set of dread-pop that suited the sunny weather; sadly, after Natty the clouds darkened and the inevitable rain appeared. Gaz Coombes played on a solo set on acoustic guitar that was largely culled from his solo albums. It wasn’t the sing-a-long the crowd was hoping for and felt slightly flat. Hiatus Kaiyote’s infusing of psych-prog soul was energetic and inventive, but as they only have two slightly cult albums (and again, the crowd was largely there for Wilson) they weren’t able to recreate the energy and excitement of previous gigs in town.

Then the highlight of the day happened, but it wasn’t on the main stage. It was in a small tent that earlier in the day had been used for local project meetings and children’s activities. The performers were Sage Francis and B. Dolan Present Strange Speech, Famous Development. The gist of the show was that Francis and Dolan would take turns performing songs, acapella, from their back catalogues until they either ran out of time or got bored and stopped. Luckily for us it was the former. Over the course of their 45 minute set they made us laugh, cry, question our place in society, and what society should really be doing for us. At the end I would happily have gone home, but as Wilson had started his set it seemed rude not to find my friends and watch it all unfold. Although it was still chucking it down, that didn’t dampen the party atmosphere or the crowd’s collective enjoyment. In all honesty I was surprised by his lucidness on the microphone and the clarity of his voice. At the end of his 90 minute set, everyone knew they’d seen a real legend, possibly for one of the last times in the UK.

If Saturday had been the raucous party, Sunday was a quieter affair. The BIMM stage offered up more local bands ;Frankie Furlow’s impressive vocals woke everyone from their collective stupors. House Points showed their hearts on their sleeves with a mixture of classic Belle and Sebastian sounds, but with soaring vocals. Episodes brought solid post-pop vibes and The Island Club, well, they were as good as they always are. Over on the Concorde2 New band Stage, Stevie Parker delivered a flawless masterclass in emotional and warming electronic pop. The only downside was the dodgems opposite drowned out some of her subtler moments.

One of the highlights of the weekend was the Marching SKAletons. The 10-piece marching band performed all over the site, all weekend. Their take on ska, pop and electronic music, with a Mariachi twist, was the perfect soundtrack to waiting in line to buy food and drink, walking between stages and whatever else you were up to. Their striking Day of the Dead-inspired make up and matching jackets meant you sometimes saw them coming before you heard them.

Over on the main stage, M. Ward and Songhoy Blues did their best to wake up the crowd from lazy lunches, but it wasn’t until Peter Hook and the Light, playing the greatest hits of Joy Division and New Order, that the crowd had something that they knew and could get their teeth into. ‘Digital,’ ‘Isolation’ and ‘She’s Lost Control’ opened his set while ‘Blue Monday,’ ‘True Faith,’ ‘Temptation,’ ‘Ceremony’ and ‘Love Will Tear Us Apart’ closed it. Then a lull came thanks to The Horrors. After Hook’s sing-a-long set, their brand of shoegazing post-pop sounded great, musically, but there wasn’t a great deal for the crowd to grab hold of, discounting the diehard contingent in the front row.

Sunday’s headliners Suede provided everything you’d want from one of their gigs. ‘Europe Is Our Playground’ kicked things off, sounding more relevant today than in 1996. Hits such as ‘Trash,’ ‘Animal Nitrate,’ ‘Filmstar’ and ‘By the Sea’ all followed suit in a 16 track greatest hits set. After ‘The Beautiful Ones,’ and encore duo of ‘Picnic by the Motorway’ and ‘New Generation,’ there wasn’t much else to do, but go home, in the basking in the glow seeing an old favourite deliver a devastatingly good set.

Together the People felt like a success; the crowds had a good time and it achieved its objectives. It was a safe environment for families to enjoy themselves while watching bands and showcased the local scene to a wider audience than might usually go to gigs. Plus, Brian Wilson delivered a set that was packed to the rafters with, pretty much, every Beach Boys‘ song you could wish to hear. There were a few things that need to be fixed for next year though.

Firstly, none of the stages were named and there wasn’t a communal board with all the set times on. While this doesn’t seem to be a massive problem (as there were only four stages) it would have been handy when doing to first sweep to get your bearings. There was also quite a lot of sound bleeding from the fairground rides and main bar. While most of the musicians playing had full bands, during Gaz Coombes’ set it was hard to hear a lot of what he was playing due to the DJ in the bar playing Afro-Beat classics. The same was true in the Condord2 stage when Stevie Parker played. The dodgems were opposite and during quieter moments all you could hear were Dexy’s Midnight Runners and Billy Ocean. The line-up on Saturday felt unbalanced, compared to Sunday, as everything was focused on Wilson’s set. Yes, he delivered, but during the day it would have been great to have some more artists that delivered sing-a-long moments like Suede and Peter Hook and the Light.

Ultimately, this is just nit-picking. Together the People delivered the festival they set out, and we’ll all expect a smoother running festival in 2017 for TTP3.

Together The People was held at Preston Park, Brighton on the 4th and 5th of September 2016